Those who remember the sorry saga of the Iraq war no doubt recall the numerous, shifting explanations of why the US attacked an unprovoked invasion of a country that had no ability to mount an attack on the US. Once the canard of “weapons of mass destruction” was dismissed, one of the next set of bogus explanations was that Osama bin Laden was in cahoots with Sadaam Hussein. That was implausible on its face; bin Laden had tried to destabilize Iraq, and various leaks from intelligence sources disputed the Administration lies party line (see here and here for example). Bush eventually ‘fessed up that there was no connection between Iraq and al Quaeda.

But there was no risk in denying the myth at that point. Indeed, it turns out that our brains are wired so badly that mentioning two ideas as being connected, whether to claim they are linked or to deny it, serves to reinforce the belief that they ARE connected. Call it “the lady doth protest too much” effect. A 2007 Washington Post article explains:

The federal Centers for Disease Control and Prevention recently issued a flier to combat myths about the flu vaccine. It recited various commonly held views and labeled them either “true” or “false.” Among those identified as false were statements such as “The side effects are worse than the flu” and “Only older people need flu vaccine.”

When University of Michigan social psychologist Norbert Schwarz had volunteers read the CDC flier, however, he found that within 30 minutes, older people misremembered 28 percent of the false statements as true. Three days later, they remembered 40 percent of the myths as factual.

Younger people did better at first, but three days later they made as many errors as older people did after 30 minutes. Most troubling was that people of all ages now felt that the source of their false beliefs was the respected CDC.

The psychological insights yielded by the research, which has been confirmed in a number of peer-reviewed laboratory experiments, have broad implications for public policy. The conventional response to myths and urban legends is to counter bad information with accurate information. But the new psychological studies show that denials and clarifications, for all their intuitive appeal, can paradoxically contribute to the resiliency of popular myths.

Even worse, when an erroneous belief is confronted frontally, people still cling to it if it supports an outcome to which they are attached. For instance, surveys found that Republicans were much more likely than Democrats to believe in a Saddam-Osama connection, even after Bush had repudiated it. An article in Sociological Inquiry describes how survey participants who had believed in a Saddam-Osama connection responded when presented with information that the relationship did not exist, including the 2005 climbdown by Bush himself: 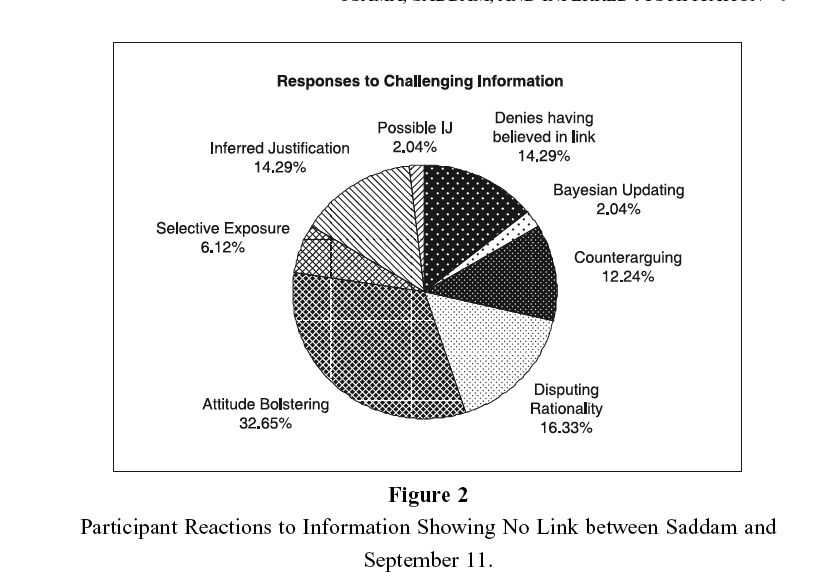 Notice: only 1/6 changed their minds, with the vast majority merely denying that they had ever held the incorrect belief. Only 2% of the total engaged in “Bayseian updating” meaning absorbing the new information and rethinking their position.

This is a long winded into, but it serves to establish two points:

1. Per the CDC example, it isn’t hard to implant beliefs, particularly when they are perceived to come from authoritative sources

2. Once someone is attached to a belief (or to something that the belief bolsters) it is hard to dislodge

Yves here. So the latest troubling sighting is efforts to turn “democracy” into a suspect word. While it may seem loopy to raise this as a concern, “liberal” was not all that long ago seen in the US as a positive, or at worst, descriptive term. Now “liberal” is so discredited that The Position Formerly Known As Liberal has either crept with its tail between its legs to the center, but still maintains that it is liberal, or is now called “progressive”, but that too is rapidly losing positive brand association, since pretty much everyone has figured out that Progressive = The Position Formerly Known As Liberal. So don’t kid yourself that even cherished concepts like “democracy” are immune to reimaging.

Some Utah County parents are calling on the Alpine School District to stop spreading “false educational ideas.” First and foremost, the parents say, the district needs to clamp down on its use of the D-word: “democracy.”…

Alpine’s mission statement is “Educating all students to ensure the future of our democracy.”

But this nation is a republic, not a democracy, said Oak Norton, a Highland father of five and the founder of Utah’s Republic. The Constitution guarantees every state a “republican form of government.” “Karl Marx said, ‘Democracy is the road to socialism,’ ” Norton said. A true democracy, he said, relies solely on majority rule and inevitably devolves into anarchy, which then sprouts socialist dictators.

Yves here. Um, the Weimar Republic descended into fascism, the first French Republic led to the First Empire under Napoleon…but never mind. See Saddam hearts Osama 2.0 in the little Karl Marx quote? Whoever is the evil genius behind the smear campaign on democracy knows the psychological tricks.

And why are some people so tetchy pedantic about the use of the word “democracy”? Because they see it as linked to The Position Formerly Known As Liberal. In other words, they’ll attack the idea of democracy if that’s what it takes to defeat those (what, gay lovin’? abortionists? godless?) progressives:

Jowers said he received some of the same criticism about the D-word as chairman of the Governor’s Commission on Strengthening Utah’s Democracy.

“There seems to be a segment of the population who is worried not just about being technically precise on these words … but somehow interprets a move to democracy as some type of a progressive movement that needs to be stopped,” [Kirk] Jowers [director of the University of Utah’s Hinckley Institute of Politics] said. “For the most part, when people talk about strengthening democracy, they’re talking about getting more people in the United States involved in our politics and government and more nations in the world being subject to elections instead of dictators.”

Yves here. While this so far looks to be an isolated event, struggles over cultural norms are often fought via the public education system, so this bears monitoring.