By Glenn Stehle, an engineer who began working in the oil industry in 1974. After a two-year stint with Cities Service Oil Company, he worked for two years for Henry Engineering, a petroleum engineering consulting firm. Upon leaving Henry Engineering he worked as an independent engineering consultant in all facets of the oil and gas business. He has extensive experience in drilling operations. He retired in 2000 and now lives in Mexico.

Yves asked me to take a look at a recent New York Times story to see if it contained any information that might provide a clue as to what caused the blowout on the Deepwater Horizon. This is a pretty treacherous exercise because information, and especially the sort of detailed information that is needed, comes from firsthand witnesses who were present at the wellsite. The NY Times story actually had some of that sort of information, so let me take a look and try to make some sense of it.

By far the most important piece of information the NY Times provides is this:

As the job unfolded, however, the workers did have intermittent trouble with pockets of natural gas. Highly flammable, the gas was forcing its way up the drilling pipes.

As a well is being drilled through a gas-bearing formation, there is always a release of gas. This is the gas that is contained in the formation rock that is being cut away. But the quantities are small. And the amounts of gas the drilling crews of the Deepwater Horizon were encountering were anything but small, as the NY Times goes on to explain:

At one point during the previous several weeks, so much of it came belching up to the surface that a loudspeaker announcement called for a halt to all “hot work,” meaning any smoking, welding, cooking or any other use of fire.

What this indicates is that they were drilling underbalanced. Let me try to explain.

But first, a little lesson in physics is in order.

The pressure exerted by a column of liquid of height h and density ρ is given by the hydrostatic pressure equation p = ρgh.

Of course this is a highly simplified visualization. Oil and gas reservoirs are not small empty horizontal tubes, but vast formations composed of rock of various porosities and permeabilities, and the vertical fluid column rises directly above the reservoir. For a better visualization, take a look at the illustration from the NY Times article (click to enlarge, or try the link): 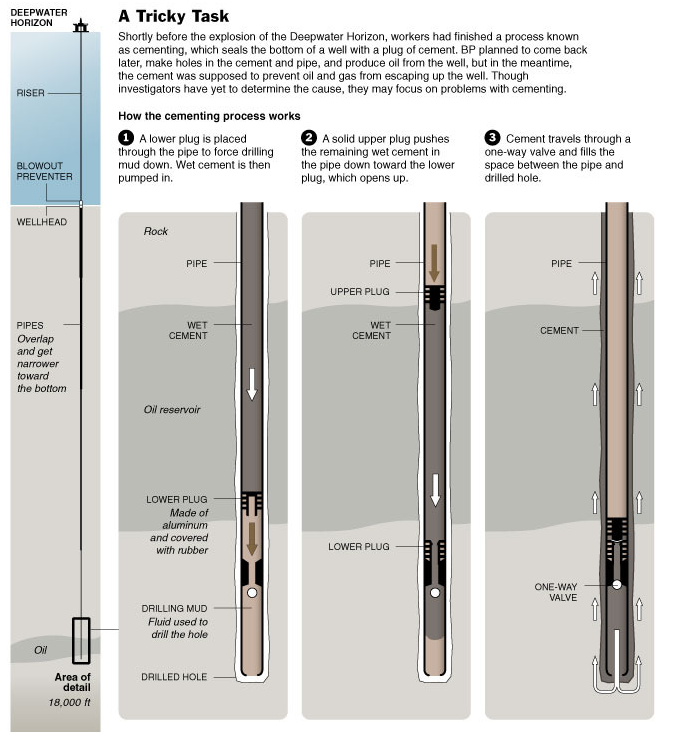 The fact that, as reported in the NY Times story, “gas was forcing its way up the drilling pipes” as “the job unfolded” indicates the situation was not ideal. In order for gas to enter the wellbore, the hydrostatic pressure exerted by the vertical fluid column (between the Deepwater Horizon and the “oil” reservoir) would have to be less than the pressure exerted by the “oil” reservoir. This situation in industry jargon is called “drilling underbalanced.”

When it became evident that gas was entering the wellbore from the “oil” reservoir, the appropriate course of action would have been to raise the density of the drilling mud, thus preventing entry of gas into the wellbore. Drilling in an underbalanced situation is a bit risky, but for various reasons (for instance, you can make hole faster) it is sometimes done. To attempt to run casing under these circumstances, however, is suicidal.

Why the decision was made to attempt to run casing under these circumstances is not known. I can say that the time required to circulate and condition the drilling mud—-that is to raise its density or “mud weight”—-on a well of this depth could run into days. Perhaps there were incentives to cut corners.
The well did not blow out while running casing. But apparently gas did enter the wellbore during the cementing process. This creates a situation known in industry jargon as “channeling,” where the cement has vertical pathways running up and down through it. Imagine trying to lay a concrete slab with gas percolating up from below.

Typically, after the cement job is complete, and on a job of this importance, a “log” (sorry, more industry jargon) would be run to verify the integrity of the cement job. We of course do not know whether this was done or not. Again, this is an expensive and time consuming operation. Here’s a link to Schlumberger’s web page describing how these logs work and what they tell you.

So here’s a summary of, again with very limited facts but in my august opinion, what the situation was:

1) The cement (between the casing and the wellbore) that normally would have hardened and isolated the “oil” reservoir, thus preventing any gas or fluids from entering the wellbore, was “channeled.”
2) The fluid column above the cement (between the top of the cement and the Deepwater Horizon) that normally would have exerted sufficient hydrostatic pressure against the “oil” reservoir to prevent oil and gas from entering the wellbore was of insufficient density to do so.
3) This fluid column was also cut with gas. With time, this gas migrates upwards, small bubbles joining with other small bubbles as they bump into each other, forming larger and larger bubbles, closer and closer to the surface.

The NY Times reports that the following day “the crew was using seawater to flush drilling mud out of the pipes.” This is consistent with reports from NOLA.com (hat tip jdmckay):

An attorney representing a witness says oil giant BP and the owner of the drilling platform, Switzerland-based Transocean Ltd., started to remove a mud barrier…
(…)
In the case of the Deepwater Horizon, Scott Bickford, a lawyer for a rig worker who survived the explosions, said the mud was being extracted from the riser…

“Suddenly, with explosive fury, water and mud came hurtling up the pipes and onto the deck, followed by the ominous hiss of natural gas,” The NY Times goes on to report. “In seconds, it touched some spark or flame.”

As a gas bubble nears the surface, it starts expanding as the hydrostatic column holding it down diminishes. So the return circulation grows stronger and stronger, but not “suddenly,” and not with “explosive fury.” There are warning signs before all hell breaks loose. So somebody was clearly asleep at the wheel. Perhaps this is where another bit of information provided by the NY Times story is important. The NY Times article indicates that there was a big party underway, with four BP executives in attendance. Perhaps nobody was minding the shop.

When the well started to unload this greatly diminished the hydrostatic head pressing down on the cement job. The faulty cement job might have held up against the reservoir pressure with the help of a full hydrostatic head, but the pressure differential was now too great, and indications are it gave way.
The last line of defense was the blowout preventers. We can only speculate as to why they didn’t close. But again there are all sorts of reasons, more than a few attributable to negligence or human error, which would explain why they didn’t.