Simon Schama tonight warns in the Financial Times that revolutionary rage is close to the boiling point in Europe and the US :

Historians will tell you there is often a time-lag between the onset of economic disaster and the accumulation of social fury. In act one, the shock of a crisis initially triggers fearful disorientation; the rush for political saviours; instinctive responses of self-protection, but not the organised mobilisation of outrage…

Act two is trickier. Objectively, economic conditions might be improving, but perceptions are everything and a breathing space gives room for a dangerously alienated public to take stock of the brutal interruption of their rising expectations. What happened to the march of income, the acquisition of property, the truism that the next generation will live better than the last? The full impact of the overthrow of these assumptions sinks in and engenders a sense of grievance that “Someone Else” must have engineered the common misfortune….At the very least, the survival of a crisis demands ensuring that the fiscal pain is equitably distributed. In the France of 1789, the erstwhile nobility became regular citizens, ended their exemption from the land tax, made a show of abolishing their own privileges, turned in jewellery for the public treasury; while the clergy’s immense estates were auctioned for La Nation. It is too much to expect a bonfire of the bling but in 2010 a pragmatic steward of the nation’s economy needs to beware relying unduly on regressive indirect taxes, especially if levied to impress a bond market with which regular folk feel little connection. At the very least, any emergency budget needs to take stock of this raw sense of popular victimisation and deliver a convincing story about the sharing of burdens. To do otherwise is to guarantee that a bad situation gets very ugly, very fast.

Schama knows this terrain cold; his chronicle of the French Revolution, Citizens, made clear what a bloody affair it was. Even so, his account in the Financial Times in some key respects understates the degree of dislocation suffered by many in advanced economies. Schama depicts the crisis-induced change as merely the end of rising expectations, but the shock is deeper than that.

Severe financial crises result in a permanent decline in the standard of living. For some citizens, that has come through contracts being reneged, in particular, pension cuts. Other people see their savings in tatters and have no realistic prospect for being able to fund their retirement. And for many of these individuals, the odds of finding continuing, reasonably paid work are low. Even before unemployment soared, people over 40 face poor job prospects. The idea that the middle aged cohort can earn back losses to their nest eggs is wishful thinking. And the young are not much better off. New graduates also face a hostile job market. Worse, students often went into debt to finance their education, believing the mantra that it was an investment.

And many of the societies suffering these financial shocks have already suffered a great deal of erosion of their underlying support structures. Even before the crisis, in the US and other advanced economies, social bonds have eroded in a remarkably short period of time, roughly a generation and a half. Job tenures are short; employees and employers have little loyalty to each other. Ties to communities are weak. Many families have two working parents, so career and parenting demands leave little time to participate in local organizations. Advanced technology frequently offers an easier leisure outlet than trying to coordinate schedules with time (or financially) stressed friends. But marriage and families are also not the haven they once were, given high divorce rates.

One oft unrecognized factor is that alienation and social stress are directly related to income inequality. This is hardly a new finding, but it seldom gets media coverage in the plutocratic US. And it has concrete, measurable costs. As Michael Prowse explained in the Financial Times:

Yves here. If you look at broader indicators of social well being, you see the same finding: greater income inequality is associated with worse outcomes. From a presentation by Kate Pickett, Senior lecturer at the University of York and author of The Spirit Level, at the INET conference in April: 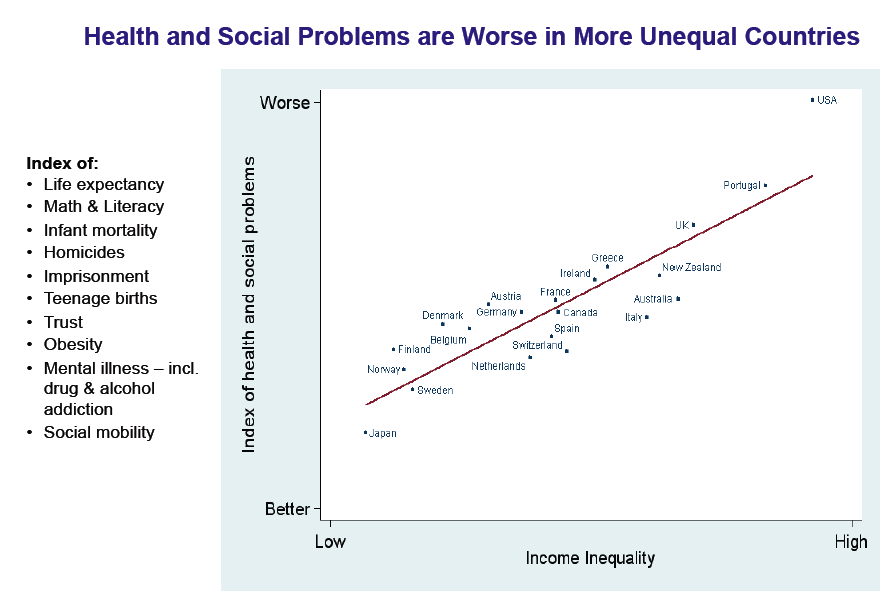 Note in particular where Japan sits on the chart. Some readers have argued that the US has little to fear from deflation and a protracted period of near-zero growth, since Japan is orderly and prosperous-looking, despite its relative decline. But Japan was and is the most socially equal major economy, and during its crisis, it observed the Schama prescription of sharing the pain. The US, the UK, and to a lesser degree, Europe, have done the exact reverse, with both the bank rescues and austerity measures effectively a transfer from ordinary citizens to financiers.

As James Lardner pointed out in the New York Review of Books in June 2007, even before the wheels started coming off the economy, the social contract in the US was pretty frayed, but a concerted propaganda campaign PR effort promoted the fiction that it was the best of all possible worlds:

To gain their political ends, the robber barons and monopolists of the Gilded Age were content with corrupting officials and buying elections. Their modern counterparts have taken things a big step further, erecting a loose network of think tanks, corporate spokespeople, and friendly press commentators to shape the way Americans think about the economy…. the new communications apparatus wants us to believe that our economic wellbeing depends almost entirely on the so-called free market—a euphemism for letting the private sector set its own rules. The success of this great effort can be measured in the remarkable fact that, despite the corporate scandals and the social damage that these authors explore; despite three decades of deregulation and privatization and tax-and-benefit-slashing with, as the clearest single result, the relentless rise of economic inequality to levels so extreme that since 2001 “the economy” has racked up five straight years of impressive growth without producing any measurable income gains for most Americans—even now, discussions of solutions or alternatives can be stopped almost dead in their tracks by mention of the word government.

Yves here. Having weakened faith in government and made considerable progress towards creating a social Darwinist paradise of isolated individuals pitted against each other, the oligarchs may be about to harvest a whirlwind.