It isn’t hard to see that the lack of decent information about how serious the Deepwater Horizon oil spill is is almost certainly due to obfuscation on the part of BP. The puzzling part is how BP can fantasize that it ultimately gains from this conduct, and why the Obama Administration tolerates it.

The frustration with continued BP stonewallling has finally produced serious pushback. The scientific community has ramped up its criticism not simply of BP’s role but of the failure of the National Oceanic and Atmospheric Administration and other federal bodies to make their own assessment of the severity of the leak and resulting damage. From the New York Times:

Tensions between the Obama administration and the scientific community over the gulf oil spill are escalating, with prominent oceanographers accusing the government of failing to conduct an adequate scientific analysis of the damage and of allowing BP to obscure the spill’s true scope….

The scientists point out that in the month since the Deepwater Horizon oil rig exploded, the government has failed to make public a single test result on water from the deep ocean. And the scientists say the administration has been too reluctant to demand an accurate analysis of how many gallons of oil are flowing into the sea from the gushing oil well.

Yves here. For a more vivid sense of the stakes, watch the testimony of Sylvia Earle, former chief scientist of the NOAA (starting at 4:20, click here to view or read the transcript, hat tip Glenn Stehle): 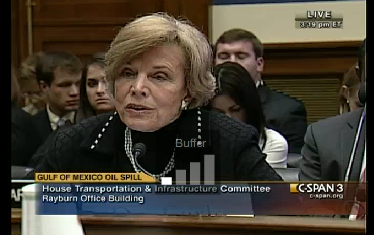 Now the cynically minded might wonder, what good does trying to hide the truth do? Ultimately, ex post facto, it should be feasible for scientists to come up with an total for how much oil has spewed from the well, between the surface spread and the extent of the recently-discovered underwater plumes. So this obfuscation isn’t about ultimate reputation damage or cleanup costs.

It seems utterly implausible that BP does not have a well informed idea as to how much oil is coming out of its well. And the evidence is compelling that the 5.000 barrel per day figure BP keeps presenting is an utter canard, considerably lower than the real outflow. But BP refuses to put measurement equipment near the leak, arguing it might interfere with remediation efforts. Huh? How can you possibly ascertain whether what you plan to do to plug the hole (which is what these first round efforts have all consisted of) has a snowball’s chance of hell in working if you don’t have a good idea of the volumes coming out of the leak?

In other words, the only reason for BP NOT to want to have this information is that:

1. Its remediation efforts to date have some reasonable odds of success only if the outflow is not that much above its 5000 barrel a day estimate

2. Higher outflows and pretty much zilch odds of success of current public-placating dorking around would lead to much greater pressure to Do Something Now.

3. The effective Do Something Now options (like the radical one of using a nuclear weapon to collapse the ocean floor into the leak) would likely also result in making it difficult for BP to ever get oil from that site

4. The BP strategy is thus very likely all about trying to maximize oil extraction by minimizing the appearance of damage and buying time while it drills a relief well

Now let us get to part 2: why is Team Obama enabling this nonsense? I come up with two possibilities:

2. Obama does not want to look impotent. Revealing that the leak is really bad and not having a quick solution is an Obama PR disaster. Obama has to work through BP unless he can implement an action plan using only government resources or by working with another oil company with deep ocean expertise. Given the lead times for government contracting, this would take quite a while.

If the leak is as serious as I fear, this is environmental equivalent of the Iran hostage crisis. Team Obama recognizes this, and therefore wants to create the impression as long as possible that everything that could possibly be done is being done. Note that the Administration is behaving with BP exactly as it did vis as vis the banksters in early 2009: believing that the problem is too complex and scary for them to assert control, casting its lot in with the people who caused the problem in the first place (while calling them bad names often enough to create plausible deniability). And enabling BP’s coverup of how bad the leak means, as Obama did with the financial services industry, of having to support, or at least not undermine too much, its PR efforts.

Now of course, as information keeps surfacing (no pun intended) that the leak is probably much worse than the BP party line. Reports of underwater oil plumes are the most dramatic example. Note that NOAA pooh poohed them two days ago. Per the New York Times today, the government was “surprised” even though this sort of damage had been anticipated in the scientific literature back in 2003, and it now appears to be scrambling to get a better understanding of the plumes.

As official information continues to be slow to be released and maddeningly incomplete, partially founded or unfounded speculation runs rampant on the Internet. For instance, one reader provided a guest post with an detailed and thoughtful analysis of how much oil might be coming from the leak, but it was based on an inaccurate yet widely reported factoid, that the pipe was five feet wide (as our resident expert Glenn Stehle said, “There is no pipe ‘5 feet in diamater’ used in well design—-that is nonsensical.”). Today, we have a report of a “blob” (shades of horror movies!). The problem is that the story contains so much sensationalism and exaggeration that it undermines its credibility, particularly when real experts like Earle stress how little is known about the real state of affairs at the wellmouth. We can only hope that the powers that be come to recognize that footdragging and obfuscation serve no one other besides BP.