By all measures, the release of the European bank stress test results on Friday was an Alfred E. Newman day for the U.S. stock market. Emerging bull patterns indicate an initial price target of 1313 for the SP500.

For the first time since the April 2010 high, during the week of July 19, 2010, the SP500 tuned out all possible bearish inputs and went back to doing what it does best: donning its rose-colored glasses and shrugging off all possible bearish inputs. It all began with lawmakers extending unemployment benefits on Tuesday July 20th (made retroactively available for participants whose benefits expired in June and July) through Nov 1999 (this gives all lawmakers a pass through the mid-term elections). That day, the SP500 rallied 2.7% off its intraday lows.

On Wednesday, Bernanke spoke of an ‘unusually uncertain’ economic outlook a day after lawmakers voted to extend unemployment benefits retroactively. The SP500 sold off roughly 2% on Bernanke’s statement. The mkt looked horrible going into Thursday. Then, mirable dictu, on Thursday morning the economic data out of Euro was better than expected. Moreover leaks to the media had been made indicating that the Irish banks would pass the stress tests. Speculating that the European bank stress tests would be a net positive for the stock market, or more accurately, that the stress tests might successfully kick the can into eternity (or at least the next year or so), the SP500 rallied 3% on Thursday from Wednesday’s close.

The European bank stress tests, by another accounting legerdemain (what else), reclassified a majority of the sovereign loans on the bank books as “held to maturity.” By and large, the stress tests were designed as a ‘get out of jail free’ card for the European banks. Should we have expected anything less for the privileged banksters? We had already seen a similar legerdemain when lawmakers repealed FAS statement 157 ~ mark to market accounting for US Banks. When this sleight of hand for the European banks were revealed to market participants on Friday morning, the first thing noted by Bloomberg’s Betty Liu and other market experts is that the European stress tests ‘were not credible.’

But as far as the stock market was concerned, the verdict returned was ‘no haircuts required.’ After reading the verdict, the courtroom was adjourned…‘the half time air was sweet perfume while the sergeants played a marching tune.’  When the bulls returned to take the field, they charged and the SP500 tacked on another 1.7% of value on Friday. All told, the bulls rallied the SP500 5% from its intraweek lows set on Tuesday July 20th.

Let me be perfectly clear: July 20, July 22, and July 23 were game-changers for the SP500. Risk-on is back and its coming with a vengeance. To recap the trump cards:

July 20 ~ UE benefits extended retroactively (this will improve US economic data regarding consumer spending beginning in August, and that is what is important for mkt participants)

July 22 ~ Overnight European economic data came in better than expected (who’d a thunk European data would be the rising tide to lift all boats meme against a backdrop of fiscal austerity and sovereign defaults.)

July 22 ~ Leaks to the media that the Irish Banks would pass the stress tests (one less PIGS to worry about, one less egg to fry)

July 23 ~ Stress tests not credible, but we knew that anyways, didn’t we? The whole point of the exercise was to return a verdict that banks a “get out of jail free” card for all of eternity if possible, leaving aside all the flaws in the ‘held to maturity’ justification.

Here is a look at the play by play action this week on the SP500 15 minute chart. 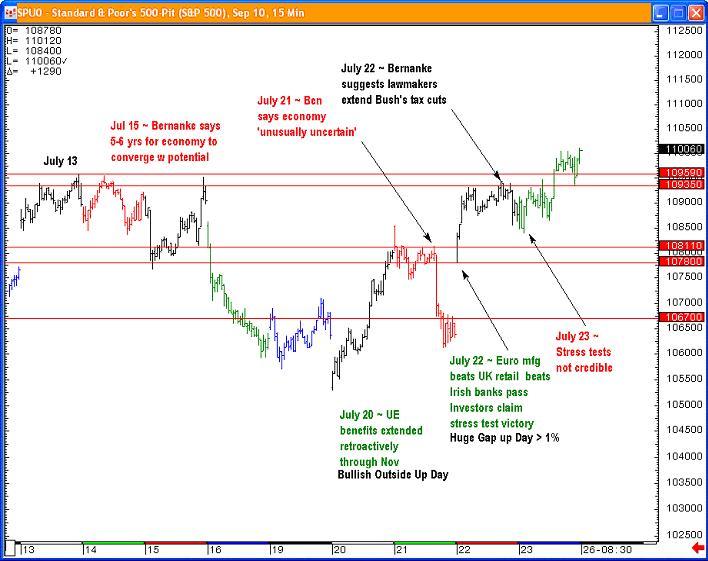 With their ‘get out of jail free’ card, banks now have the ability to put the risk back on that they had to take off in case of sovereign default during May and June 2010. Banks have only just started to started to put the risk back on the table. Investors and traders can expect the banks will be slow to put risk entirely back onto the table, given the poor July economic data that is expected to be announced at the end of July and August. For all intensive purposes, the US economic data for June indicated a recovery that was pancaking into recessionary territory, so, market participants will want to wait until the contradictory evidence of their baseline “economic recovery story” passes. Once the contradictory July data has passed, the restoration of the UE benefits will help the economic data confirm the baseline ‘slow recovery’ of the force majeure.

All it will take to reawaken the animal spirits of the big banks and to put risk back on is to eliminate the sovereign debt default risks to banks and then to see confirmatory evidence of their baseline scenario that a slow recovery is intact. The sovereign debt default risk hasn’t so much been eliminated as smoothed over by the European bank stress tests ‘held to maturity’ reclassification.  The slow recovery story is largely a matter of perception and where you stand. If you a bank with a gov’t guarantee and steep yield curve, things are pretty darn good. If you are standing in the unemployment office, or so thoroughly discouraged that you gave up looking for a job, things are pretty rotten. But the dominant perception, as far as the stock market is concerned is the Wall Street, big banks point of view and not that of Main Street.

The other notable nuances bulls are looking at. (hat tip David Rosenberg’s July 23rd Breakfast with Dave daily missive). The observations are Dave’s but the summary comments below are mine.

According to studies by Thomas Bulkowski, rising wedges have a 92% success rate. Declining wedges have an 82% success rate. Wedges “occur more often during consolidations but are more dramatic after a climax” says Charles Kirkpatrick, adding that “it is extremely important to wait for the actual breakout from the wedge [because even though the failure rate is extremely low] wedges have a high percentage of premature breakout. Thus a premature breakout may be followed by prices reentering the wedge formation, but the original breakout direction is still very likely to be valid.”

Because the soundbites coming from the economic data over the course of the next few weeks are on balance expected to be bearish inputs for equities and bullish inputs for bonds, I think it is safe to say that while the equity bulls may eventually have the macro story right for the next few quarters, last week’s 5% intraweek rally should see some back and fill. That is, the SP500 should see some throwback over the next few weeks because the near term outlook is still a dark one. Thus, I would characterize last week’s equity rally as legit, but also as a bit speculative and early.

Outside Up Week Pushes SP 500 Above Bullish Declining Wedge

Declining wedges are bullish continuation patterns and rising wedges are bearish continuation patterns. When the upper trendline of a rising wedge is breached, as it was with this week’s outside up bullish signal, the bull trend is said to resume. This indicates that the July 6 low should be a valid support that will eventually breach the April 26 high targeting the August 2008 high at 1313. 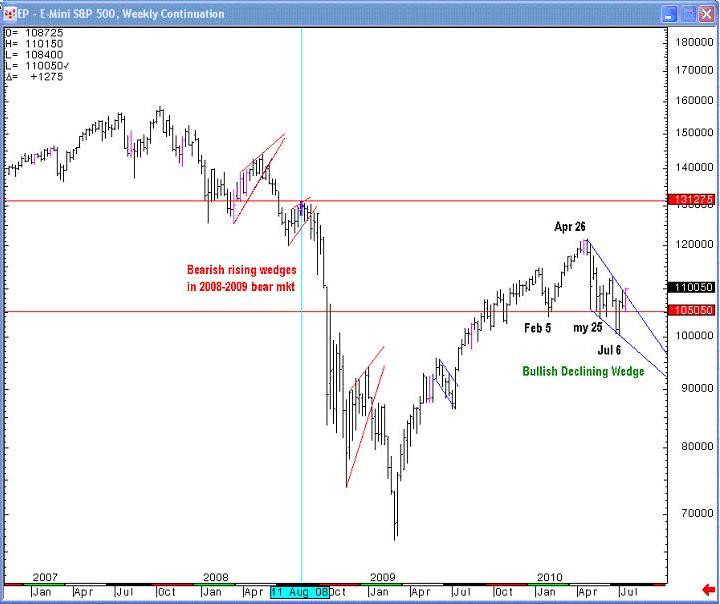 Coincident with the SP500 forming a bullish declining wedge since May 2010, the 30 year treasury has likewise been forming a bearish rising wedge that may well have completed on Bernanke’s ‘unusually uncertain’ comments about the US economy on his semi-annual testimony to the Senate on July 21. But since the price of the 30 year has yet to fall below the rising trendline off the May 2010 lows, we can not be sure the decline off July 21 high set by Bernanke’s ‘unusually  uncertain’ comments will take out the July 14 lows. The July 14 low was supported by Bernanke’s July 15 statement that it will take 5-6 years for the US economy to ‘converge’ to its potential growth rate. The Japanese love buying US treasuries on bad news such as Bernanke’s July 15 and July 21 comments. There is apt to be more bad news out of the US economy in the first half of August, so. The treasuries are as a result taking their sweet old time to signal a resolution to this bearish rising wedge pattern that formed in the past three months. 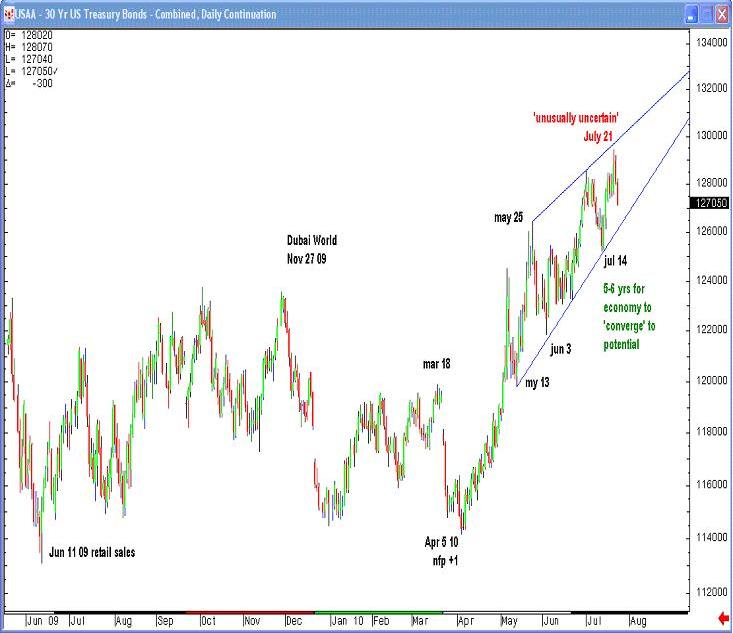 Another reason the caution in the equity markets over the course of the next few weeks is that the financial sector did not SP500 to new move highs in July this past week and still remain heavy as does the badly maligned energy sector and health care sector. These three sectors are apt to act as anchors on the broad market over the next few weeks until there is more clarity and uncertainties become less worrisome for a spell.