Fiscal drags combine with manufacturing drags in 2011 ~ these drags will subtract 2.5% from GDP in 2011

The manufacturing sector has pancaked in June and July after giving roughly a 1% boost to GDP over the last 4 quarters. Moody’s says we can expect to subtract that 1% mfg boost to the economy in 2011. “It’s becoming increasingly clear that the biggest lift from the inventory cycle is over. The inventory swing added nearly a percentage point to real GDP growth over the past year and is unlikely to add anything during the coming year. This will weigh on manufacturing output over the next several months.”

David Rosenberg adds that there will be a 1.5% fiscal drag in 2011, and reminds us of a third potential drag on the economy in 2011, the expiration of the Bush tax cuts. Bernanke floated a trial balloon to lawmakers suggesting they extend the Bush tax cuts last week, so we can expect the looming tax cut drag will disappear.  From Rosenberg: “we have at least 1.5 percentage points of fiscal drag coming out way next year so it will be interesting to see what it is that ends up preventing the U.S. economy from contracting.” Rosenberg warns that in two out of the three other aggressive tax hikes since WWII, the economy experienced hard landings. I do think lawmakers will extend the tax cuts because of the fragility, and ‘unusually uncertain’ outlook, but if not, there is a third drag. Final Q1 2010 GDP came in at 2.7%. Adv-GDP for Q2 2010 is estimated to come in at 2.5%. All told the first half of 2010 is growing at best at 2.5%. With the fiscal and mfg drags subtracting 2.5% from GDP growth in 2011, what will be there in 2011 to move the economy forward?

The takeaway is that without real and substantial job growth in the private sector, without growth in the mfg base, without gov’t stimulus, 2011 is poised to sputter. Oh, the SP500 can be expected to climb a wall of worry into Q1 2011 targeting 1313, but then what, another bear mkt? “I reckon so”, said the outlaw Josie Wales.  We should all enjoy the next stock market rally, but also remember to heed Rosenberg’s long-standing advice, these stock market rallies are to be ‘rented’ in secular bear mkts, and we are still in a secular bear mkt.

The Yen Carry Trade to buy US Treasuries in Q2 2010 is beginning to soften and can be expected to be unwound after the August 6 NFP or after the August 13 Retail Sales report. I don’t think we will see the Yen carry trade resume until 2011, when the anticipated drags on the US economy become reality.

Meanwhile, the overcrowded long gold trade continues to be unwound and is expected to persist into the first half of August, perhaps longer. Gold’s strongest correlation right now is the US Dollar. The dollar has been plunging along with treasury yields in Q2 and Q3 largely on the plunging US economic data in June and July. The dollar won’t really strengthen against the Yen until the carry trade unwind gets underway and that won’t happen until the summer doldrums data in the US bottoms. We won’t see a bottoming in most of the data until mid-August.

You can see on the gold chart below that gold reluctantly followed the dollar on a southbound trek at the end of the first half of 2010. Everyone wanted to hold the glittering gold in their portfolios until the first half of the year came to a close because it, along with treasuries were the best investments in the 1st half of 2010. Gold not so much so anymore! Another 6% lower and it will round-trip to unchanged on the year again. Equities just round tripped to unchanged on the year from way ‘down-under’ as they say in Australia this past week. Intriguingly, the 2009 yr close in Gold and the SP500 are both quite near 1100, they are sort of behaving like two ships passing in the night….. 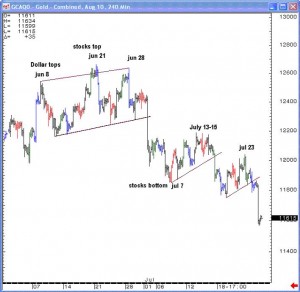