[Videos embedded in my blog]

Read this first, for background.

BP suspended the “top kill” operation for 16 hours – because, according to numerous experts, it was creating more damage to the well bore – without even telling the media, local officials or the public that it had delayed the effort until long afterwards.

BP also admitted – many days after it stopped the top kill attempt – (1) that BP had to stop because mud was leaking out below the seafloor, and (2) that capping the well from the top could blow out the whole well.

Similarly, it took more than 5 hours for BP to publicly announce the delay of the “well integrity test” after the decision to delay was made.

So BP doesn’t have a great track record of promptly informing us of what is happening.

But now that the well integrity test (background here and here) is underway, can we somehow tell if it’s working or not?

The government previously announced that the test would succeed if pressure in the well of 8,000-9,000 psi were observed for a sustained period. As Coast Guard admiral Thad Allen said:

We are looking for somewhere between 8,000 and 9,000 PSI inside the capping stack, which would indicate to us that the hydrocarbons are being forced up and the wellbores are being able to withstand that pressure. And that is good news.

We will at some point try to get to 8,000 or 9,000 and sustain that for some period of time, and these will be done basically, as I said — if we have a very low pressure reading, we will try and need (ph) at least six hours of those readings to try to ensure that that is the reading. If it’s a little higher, we want to go for 24 hours. And if it’s up at 8,000 or 9,000, we would like to go 48 hours just to make sure it can sustain those pressures for that amount of time.

Images from BP’s Oly Rov1 camera show the gauge for the input on the blowout preventer has been 2,000 psi for quite some time: 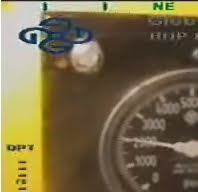 And the Hos ROV1 camera shows pressure of less than 1,000 bpi on another gauge: 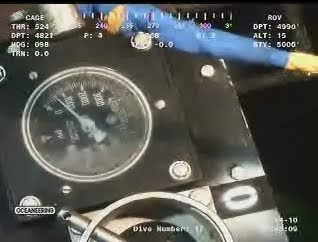 People still looking at pressure gauges and talking about that. The pressure sensing devices are what we call pressure transducers and they send a signal to the surface which are then are converted to their actual pressure readings. So we will not have ROV cameras on pressure gauges that will show what the pressures are during the tests. The pressure gauges you see are for our hydraulic equipment or (accumulators) et cetera like that.

So the gauges don’t necessarily mean anything.

Also, there was an apparent explosion of oil coming out of the cap.  As Bloomberg noted tonight:

BP Plc said it will begin a pressure test of its gushing Gulf of Mexico well after fixing a leak that erupted while it was shutting off oil flow with a new containment cap. The leak was detected in a “choke line” leading from the stack of valves ….

Hypothetically, BP will fix the choke leak, and then re-start the test.

The Times-Picayune has a good video explaining the process and at least some of what we’re looking at:

But given BP’s track record, we may not find out until hours, days or even weeks after the results are in whether the test is a success or failure.