I generally refrain from reproducing significant parts of another commentator’s work, but a Paul Krugman post debunking the depiction of state and municipal employees as welfare queens merits more attention than a mere link.

Krugman points to a paper by Jonathan Schmidt, who has parsed the data on private v. public sector worker pay level, concludes that the factoid that critics like to point to, that public workers are on average, better paid (by 13%, to be exact), is misleading, Why? Government workers are older and better educated (how many government jobs are the analogous to minimum wage Wal-Mart greeters, for instance?). When you adjust for greater age and experience, public sector workers are lower paid than their private sector counterparts, by 4%.

I think the easy way to think about this is to realize that about half of state and local workers are teachers and academic administrators — which means that they’re college-educated, at minimum. And think about it: how many ambitious young people do you know saying, “My goal in life is to become a high school teacher — that would put me on easy street”?

Yves here. One possible legit beef is the proliferation of administrative positions in public schools, but that’s largely distinct from the level of pay.

Krugman also shreds the idea that pensions are breaking state and local budgets:

….even if you believe that the age-and-education-adjusted calculations are wrong, and public employees do get paid somewhat more than they “should”, how big a deal is that? I went to the Census state and local finance data, and got this picture of the composition of non-federal government spending: 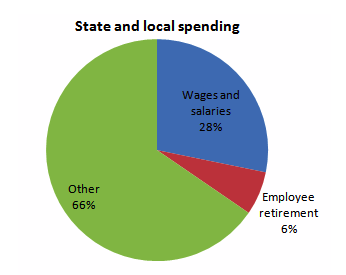 A few percent either way in workers’ compensation would not make a big difference to state and local spending. This is a phony issue.

Of course, so were the welfare queens.

Update: A number of commenters have alluded to large unfunded pension liabilities. Two points: first, the fact that state and local governments haven’t been making large enough contributions to pension funds says nothing, one way or the other, about whether workers are overcompensated. Bear in mind that, as Cohn notes, many government employees don’t get Social Security. Second, a “trillion dollar liability” needs to be placed in context: state and local governments spend $2.8 trillion per year. Compare the pension liability with total spending over, say, the expected remaining lifetimes of those workers, and it’s a real problem but not inconsistent with my point that these compensation issues have been grossly overstated.

Yves again. In other words, pensions could still be a problem in particular cities and states, but these instances are being used to depict it as a widespread problem, when the evidence is that that just isn’t the case.