Apologies for thin links. Have to be up early for me on Sat.

Late Night: Jane Hamsher on Obama’s Boys’ Club That Won’t Listen to Women Who Were Right FireDogLake. I’m not big on gender stereotyping…but maybe this not playing team sports does have long term effects….

Bank Of America, JPMorgan Chase Fail To Repeat Perfect Quarter Shahien Nasiripour. Couldn’t have that, it would prove the markets were rigged.

Wait A Minute — Why Does Mark Hurd Get $50 Million Severance When He Lied In His Expense Reports?* Henry Blodget

Greenspan Calls for Repeal of All the Bush Tax Cuts New York Times. I am certain Dean Baker and Brad DeLong will have a field day with this one. The article says Greenspan is to the left of Obama (not hard, admittedly) because he wants to balance the budget in a deep recession with 16.5% U6 unemployment. 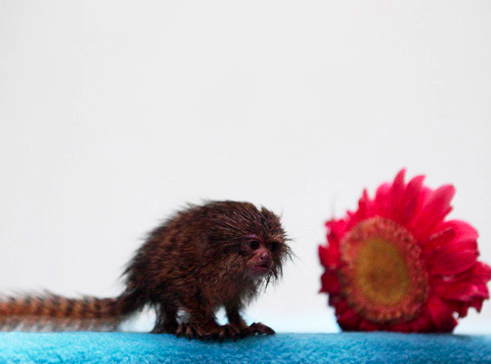 This is not a gremlin – it is the world’s smallest monkey, the pygmy marmoset (Callithrix pygmaea).

With an adult body length of only 14 to 16 centimetres, and weighing as little as 120 grams, the endangered pygmy marmoset is one of the smallest primates discovered. They are normally found in the rainforest canopies of South America, however this chap was confiscated after being found inside the clothes of a Peruvian citizen by police.

This marmoset will now recover at a primate rescue and rehabilitation centre near Santiago, Chile.