By Andrew Horowitz of The Disciplined Investor

As discussed in a previous post, the September month has not been kind to investor’s. However, equities have seemingly found some confidence straight out of the gate, so far. The Unemployment numbers released by the Bureau of Labor Statistics will be the tell tale sign of continued strength or another re-test of the 1,040 level for the S&P 500. The market has been trading in a wide range of approximately 1,040 – 1,130 for the past several months and we are not sure that it is likely to breakout anytime soon. 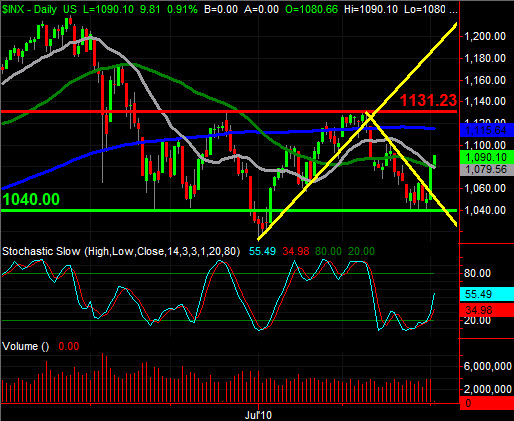 Government and FED intervention has kept traders and investors on their toes with conflicting statements that have caused markets to move wildly up and down. Even when disseminating the FOMC minutes, Bernanke and crew were concerned how the August FOMC statement and reinvestment of interest into longer term bonds would be taken by the markets. Obviously they are acutely aware that this market is trading on every economic number, oil explosion and political gesture.

Economic data has been inconsistent in the U.S., but more recently we have seen more upbeat data from Chinese and Japanese Purchasing Managers. Australia has seen growth and even parts of Europe have had a temporary boost (primarily the work of the $1.18 low of the Euro from a few month back).

However, the U.S. has lagged on the employment side and for a “sustained recovery” to take hold, this is where we will need see the greatest change (click to enlarge):

Consensus estimates are all over the map for the 8:30 am release today. After the ADP released disappointing numbers on the private employment front on Wednesday, several economists brought down their numbers. All eyes will be on the private payrolls as the temporary workers hired for the decennial census completed their work are still going to have some part in this release.

So, we are looking for a number of total job losses close to 125,000 with +45,000 private being a key level that the markets will be watching for. If the report shows a good deal more lost, then there may be a second thought in putting more money to work in equities, and visa versa.

One more consideration is to watch for the level of municipal layoffs. As cities are cutting back due to severe budgetary constraints, we may see a higher level of layoffs in that area.

Economists are also expecting the unemployment rate to rise to 9.6% from 9.5%. We are thinking that it may come in closer to 9.7%.

(By the way, my property taxes went up – even though the assessed value of my house went down significantly!)

This particular day will assuredly provide some excess volatility as traders are already enjoying an elongated Labor Day weekend in the Hamptons or Miami. The lack of volume/liquidity is sure to have markets moving sharply if the report varies significantly from consensus.