The spin-meisters continue to package things that ought to incite outrage in anodyne wrappers in the hope no one will look inside. “The new normal” and “structural unemployment” join the universe inhabited by such gems as “extraordinary rendition” and “pre-emptive strike”.

“New normal” is particularly insidious, since it implies that we must accept current conditions, since they are “normal” hence it would be abnormal and/or require exceptional effort to experience anything else. “New” acknowledges things have changed, but “new” usually has positive connotations, and masks the fact that pretty much nobody except the banksters and some members of the top 1% are exactly keen about present conditions. It also had no footprint of how things changed; if you didn’t know what it stood for, it could just as easily be used to describe a dramatic natural shift, for instance, how the weather changed in the wake of the Krakatoa eruption.

“Structural unemployment” is not only sneaky, but also downright misleading. The catchphrase is meant to convey that unemployment just can’t be helped, it results from fundamental problems in the job market. Now since we have on average something like one job opening for every five unemployed people, even if structural unemployment was a real phenomenon, it is far from sufficient in explaining why we have U6 unemployment at over 16%.

I had been planning to write about this, and it turns out other people are on to this wee bit of branding. Per reader Francois T:

As you pointed out a while ago, Washington has not shown great urgency with the high UE rate. That is in part understandable, since our political elites has a negative attitude toward the needs of low income people, which have been hit much harder than anyone else during this recession.

But you can’t say things like “We don’t like you and you suck” to a large swat of the electorate. So, a justification, a narrative was needed. In came the “New Normal” the new “Structural Unemployment” that, God knows how, let alone why, has settled in during this Great Recession. Why did entire sectors of the economy employed X people at the beginning of 2007, and suddenly and for the foreseeable future (say 5, 10, 20 years…who knows?) said sectors would only need Y (where Y< X ) people. We are generous here, since we're assuming the previously alluded to sectors would survive. So, that is that: UE shall be high, suck it up (thank you Charlie Munger for the unsolicited advice...moron!) and get used to it.

The narrative behind the “structural unemployment” spin goes something like “there really are jobs, but those crappy workers, they don’t have the skills (i.e., as in they didn’t work hard enough at the right stuff earlier in their life) or they are in the wrong location.” We’ve seen the MSM dutifully take up this narrative, and had readers point out that in many cases, the “jobs are going a begging” is due to companies making such lowball pay offers that they are coming up short on takers.

Two (in a way, three) articles debunk this idea. The first is an IMF study, which concludes that the housing bubble implosion has far more to do with unemployment than a skills mismatch. Mike Konczal has a nice write-up, and he’s a bit peeved because he had worked up an analysis from what he saw as better underlying data and had wanted to refine it further before releasing it. But bottom line, he and the IMF independently come to the same conclusions. Mike is entertainingly annoyed in his lead in:

When IMF experts put the United States’ so-called “structural unemployment” under a microscope they find that the large majority of this is the result of the massive of wave foreclosures and underwater mortgages and only a small part is related to skills/education mismatch.

The real problems are far more likely issues of TARP not having created a cramdown provision, second-liens being over-valued on the stress test and community groups like ACORN fighting against foreclosures being under-funded and under attack, not that we aren’t ‘shocking’ teacher’s benefits or getting a pair of pliers and a blowtorch and getting medieval on the minimum wage’s ass or whatever feverish dreams constitutes our elite’s thoughts about the unemployed lucky duckies. 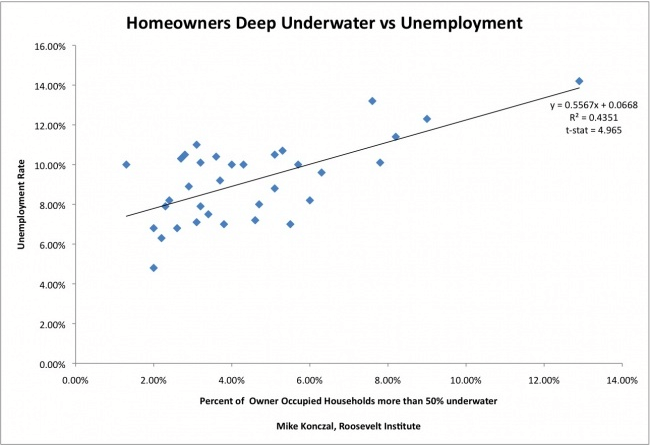 This [IMF] paper shows that a large majority of structural unemployment is the result of underwater mortgages and foreclosures. In addition, when foreclosures are added into the regression alongside SMI, SMI loses some of its value, and when a cross term is added skills loses a bit more. Right now, the story is one of foreclosures.

So groups that fight foreclosures, say what many over-worked and under-paid community organizers do now, are groups that fight to reduce structural unemployment for everyone. Same with those trying to get cramdown and right-to-rent and better short sales. Which is a worthwhile thing to be doing…..

Bonus: Let’s say that Bank of America drove a truck full of chemicals into a town square and proceeded to burn the chemicals. The toxic fumes of these chemicals caused a statistically significant number of workers to be so sick that they ended up not able to work and detached from the labor force and forced major costs onto municipalities. We’d tax the hell out of BoA for burning those chemicals, right? Externalities and all that.

So let’s replace “burning toxic chemicals” with “foreclosures.” It’s the same story….So why aren’t we taxing the hell out of foreclosures?

Yves here. I know some readers will start on the “deadbeat borrower” theme, but there are three reasons this is wrongheaded:
1. Earth to readership, normal behavior in creditor land is to restructure debts of borrowers who get in trouble IF the borrower is viable at a level that is better than liquidation. Given massive loss severities right now (60%-70% if not higher with foreclosure costs included), you’d think this would be happening. But the servicers who make the decision to foreclose are NOT the creditors. They get paid to foreclose, they don’t get paid to mod (and the HAMP subsidies are way too low to induce then to change behavior other than to scam the program).

2. Many borrowers are victims of servicing errors, even predation. Servicers, in contraction of federal law, will apply a payment first to fees (say late charges) and then to the regular amount due. Servicers have also been found to hold checks to make them late. So say a payment is treated as late, because it was delayed in the mail (your routine mailing date allowed too little room for error), or servicer chicanery or incompetence. You are treated as late, you are charged a fee AND may also incur an interest penalty. The fee is taken out first, usually on the next month payment. So that one is short, since the fee comes off the top, hence treated as late. So more fees.

Servicers typically don’t tell people their payments are late. This sort of thing goes on 6-7 months and by that point, the borrower is several thousand dollars in the red. The borrower may not be able to come up with the extra amount, or reluctant to (it will disappear into the maw of the servicer, dream if you can straighten out the improper fee charging practices). The borrower is on his way to foreclosure.

3. Some borrowers are also victims of origination fraud. Most borrowers who are behind on payments don’t fight to keep the house (indeed, the whole strategic default meme says it even makes sense for borrowers who can afford their house to walk away). But some were steered into taking mortgages they could not afford, and some will try, when foreclosed upon. to get their story heard. There have been many variants of bad originator behavior, the biggie being the borrower being told deal terms, not having the sophistication to check the documents at closing, and signing for a completely different deal (and this isn’t a matter of education level but finance savvy: I heard of a PhD being sold a 30 year fixed rate and signing for an option ARM). I’m in the process of getting cases, but there are instances of borrowers signing commitment letters, then being told they had to accept the deal on greatly worse terms because it had already been financed, and if they didn’t, they’d be sued into oblivion.

The Economic Policy Institute also found the structural unemployment case sorely wanting and has its own lengthy report to back it up:

A better explanation for high unemployment is that there are simply not enough jobs to go around. …

Consider the evidence. Manufacturing capacity fell to 71.6% in June 2010 from 79.1% in December 2007. Vacancies in commercial offices now stand at 17.4%. Total demand in the second quarter of 2010 is still below its pre-recession level……

The claim of extensive structural unemployment presumes that millions of workers are now inadequately prepared for available jobs even though they were fruitfully employed just a few months or years ago.

Let’s look at that line of thinking from a few different angles:

Productivity, Technology Investment: Productivity did grow a pretty spectacular 6.3% from early 2009 to early 2010, but that was the extent of productivity growth since the recession started in late 2007. Net investment in business equipment and software in 2009 (the latest data) was actually negative, for the first time since World War II. This alleged structural transformation of production processes that left four to five percent of the labor force inadequate for the available jobs was clearly not associated with new equipment or new technological processes.

Location: If all of the country’s unemployed workers were to relocate to states with low unemployment, there would still not be enough jobs to go around. There are only 11 states — with a total adult population of about 17 million — where the unemployment rate in June was less than 7.0%. If all the unemployed moved to those states they would nearly double the labor force there.

n fact, one of the curious aspects of this misguided theory of structural unemployment is how hard it is to find any research tying this story to actual detailed trends in employment, unemployment or output data.

So I hope at a minimum when you read “structural unemployment” your bullshit detectors will now go off and you’ll start reading for where the logic or data are questionable. Generalizing from isolated cases and making them seem representative is sadly all too common in the mainstream media.