Yves here. I did a small study for a then midlevel, now top level Russian oligarch in the early 1990s who bought a US retail chain. It wasn’t exactly the most astute purchase. One of the factoids I came across in assisting him in figuring out how to scrub it up for resale was the proliferation of retail store space. As of then, it had increased considerably over the 1980s to 27 square feet per capita. Compare this with the figures in Quinn’s piece that follows.

By Jim Quinn, who writes at The Burning Platform 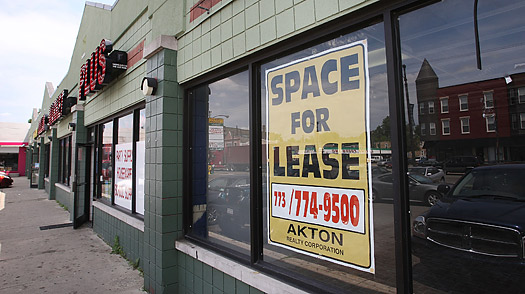 There is a Part 2 to the story of Consumer Deleveraging that will play out over the next decade. Consumers will deleverage because they must. They have no choice. Boomers have come to the shocking realization that you can’t get wealthy or retire by borrowing and spending. As consumers buy $500 billion less stuff per year, retailers across the land will suffer. To give some perspective on our consumer society, here are a few facts:

Despite the ongoing recession and the fact that consumers must reduce their spending over the next decade, irrationally exuberant retail CEOs continue their death march of store openings. Below are announced expansion plans for some major retailers:

Retailers expanding into an oversaturated retail market in the midst of a Depression, when anyone without rose colored glasses can see that Americans must dramatically cut back, are committing a fatal mistake. The hubris of these CEOs will lead to the destruction of their companies and the loss of millions of jobs. They will receive their fat bonuses and stock options right up until the day they are shown the door. 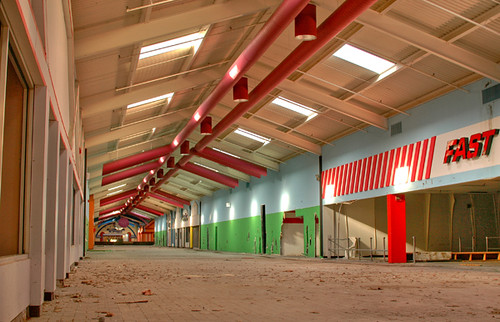 All of the happy talk from the Wall Street Journal, CNBC and the other mainstream media about commercial real estate bottoming out is a load of bull. It seems these highly paid “financial journalists” are incapable of doing anything but parroting each other and looking in the rearview mirror. Sound analysis requires you to look at the facts, make reasonable assumptions about the future and report the likely outcome. Based on this criteria, there is absolutely no chance that commercial real estate has bottomed. There are years of pain, writeoffs and bankruptcies to go. 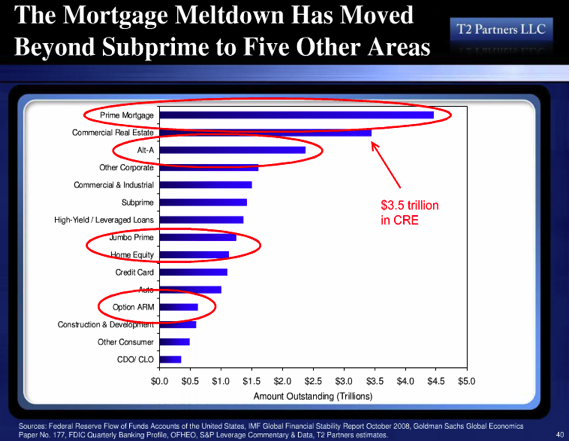 Let’s look at some facts about the commercial real estate market and then assess the future:

* The value of all commercial real estate in the U.S. was approximately $6 trillion in 2007 (book value, not market value).
* There is approximately $3.5 trillion of debt financing these commercial properties.
* Approximately $1.4 trillion of this debt comes due between now and 2014.
* The delinquency rate for all commercial backed securities exceeded 9% for the 1st time in history last month and has more than doubled in the last 12 months.
* Non-performing loans are close to 16%, up from below 1% in 2007.

Do these facts lead you to believe that the commercial real estate sector has bottomed, as stated in the Wall Street Journal? The Federal Reserve realized the danger of a commercial real estate collapse to the banking system over a year ago. They have encouraged banks to extend and pretend. The website www.MyBudget360.com describes in detail what has occurred:

What has happened is the Fed has allowed this shadow monetization of the debt and banks let borrowers roll over CRE debt without even making payments in many cases! Think of an empty shopping mall. There is no buyer for this in the current market. So why would a bank want to foreclose on the borrower? Instead, they pretend the asset is worth $10 million while the borrower makes no payment and the Fed keeps funneling money into the banking system. In the end, the value of the dollar gets crushed and you end up bailing out the banking system. Commercial real estate has collapsed even harder than residential real estate. This market is enormous in terms of actual debt. There is no official bailout on the books but it is occurring through a slow and deliberate process. Banks know that they are essentially insolvent and they are dumping this junk onto the taxpayer.

This grim story began between 2004 and 2007. The horrifying ending will be written between 2011 and 2014. Commercial real estate loans for office buildings, malls, apartment buildings and hotels usually have 5 to 7 year terms. If you thought the debt induced bubble in real estate only affected residential real estate, you are badly mistaken. Before the boom, a normal year would see $100 billion in commercial real estate transactions. Between 2004 and 2007 there were $1.4 trillion of deals done, with 2007 reaching a peak of $522 billion of commercial real estate deals. Shockingly, the Wall Street banks, run by MBA geniuses, loaned developers a half trillion dollars at the very peak in the market. Sounds familiar. Thank God the taxpayer has bailed these Einsteins out so they could live to make more bad loans and collect big fat bonuses. 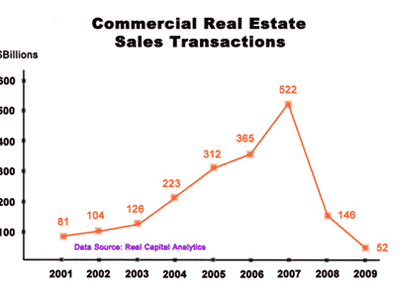 Commercial real estate prices rose 90% between 2001 and 2007, driven by the loose monetary policies of the Fed and complete lack of risk management on the part of the banks making the loans. Knuckle dragging mouth breather developers built malls, apartments, offices and hotels with abandon as billions of dollars rained down on them from Wall Street. The consumer delusion of debt financed wealth led to the developer delusion that 100% occupancy and increasing rents for all eternity were guaranteed. 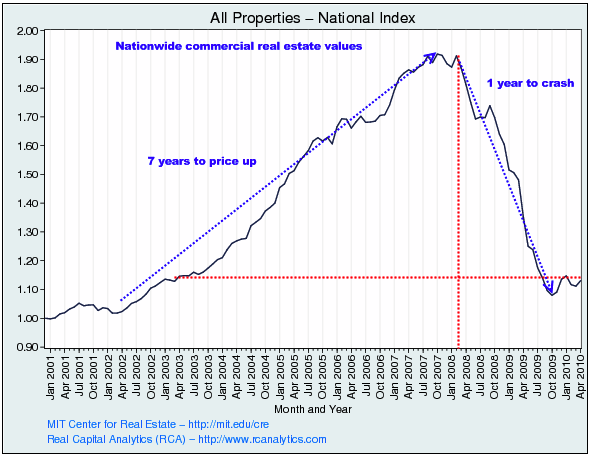 Commercial real estate prices have dropped 42% in just over a year. This means that the $6 trillion value of all the commercial real estate in the country has dropped to $3.5 trillion. The debt remained in place. The billions in debt issued in 2003 – 2005 is coming due between 2010 and 2012. The underlying assets are worth billions less than the debt that must be refinanced. Commercial loan payments by owners can only be made from cash flow generated by rental income. A key requirement in generating rental income is tenants. 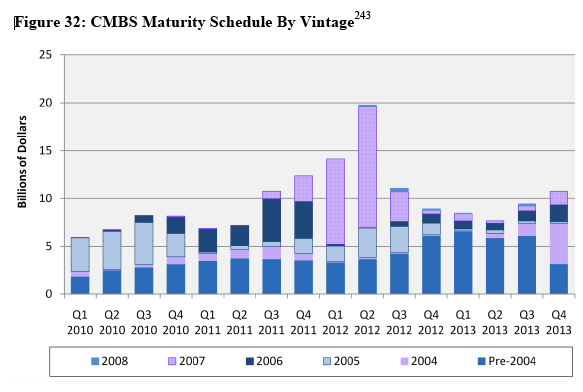 Let’s examine the current state of vacancy rates for offices, shopping malls and rental properties. The current office vacancy rate of 17.5% is the highest since 1993 and is just below the all-time high 18.7% in 1992. The WSJ has concluded, with no data or analysis, that the vacancy rate has bottomed. As the employment data proves, companies are not hiring employees. New companies are not being formed. Government mandates and regulations regarding healthcare and uncertainty about taxes will keep the formation of new small companies at a minimum. Conglomerates continue to ship jobs overseas. Part 2 of this Depression will drive more companies out of business. Office vacancies will remain at record levels for the next five years. 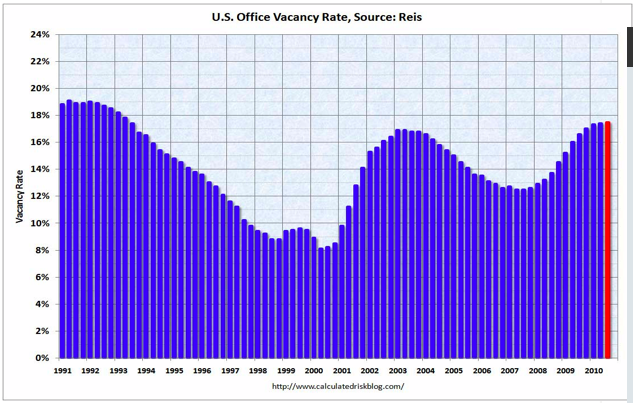 Mall vacancies between 9% and 11% are at record levels. There is absolutely no chance that these vacancy rates decline over the next few years. With consumers deleveraging, wages stagnant, unemployment high, and retail oversaturation, there are thousands of retail stores destined to close up shop. Ghost malls are in our future. They will come in handy as homeless shelters and soup kitchens. Mall developers will be defaulting in record numbers. 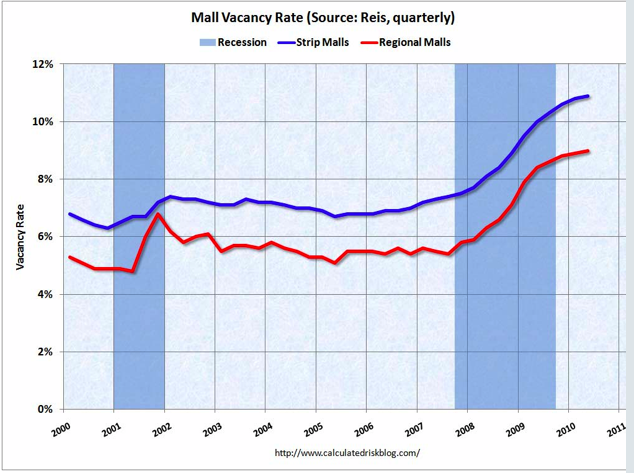 Apartment vacancy rates peaked at 11% in 2009, the highest level in history. With millions of vacant homes and millions of available rental units, rental rates will stay low for years. The cashflow of apartment developers will under stress and will lead to more loan defaults. 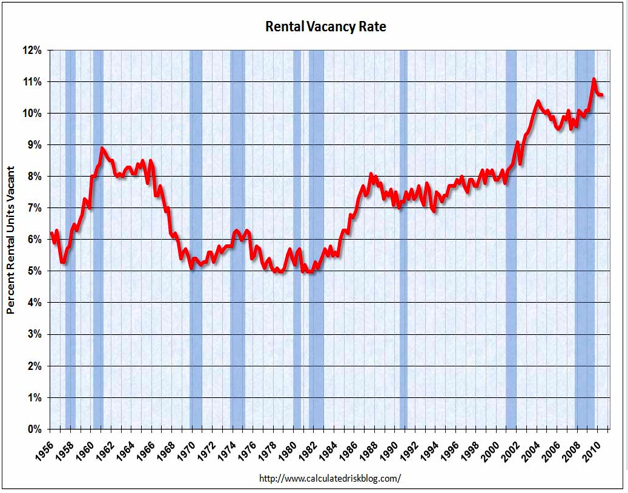 Based upon the current rising delinquency rates of 15.7% for commercial real estate loans and 9.05% for CMBS, there is no bottom in sight. Only raging mindless optimists like Larry Kudlow could ignore the facts and conclude that all is well in commercial real estate world. Banks pretending that the loans on their books aren’t worth 40% to 50% less, while also pretending that borrowers with negative cash flow can make loan payments, is not a solution. It is a Federal Reserve encouraged fraud. Allowing loans to be rolled over with no hope of ever being repaid will only prolong the pain and delay the inevitable. 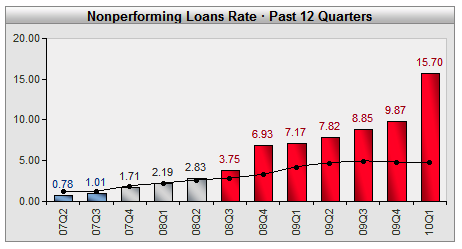 The facts are that hundreds of billions in commercial loans are coming due, with a peak not being reached until 2013. If banks were to properly account for the true value of these loans, hundreds of regional banks would be forced to fail. This is unacceptable to government authorities. They will insist that the fantasy continue. Banks and real estate developers will pretend to be solvent, hoping the economy will miraculously repair itself and eventually make them whole. I understand these bank CEOs and delusional developers also believe in Santa Claus, the Easter Bunny, and the Efficient Market theory. It seems our entire financial system is based upon debt, fantasy, fraud, and delusion.