By Jim Quinn, who writes at The Burning Platform

As I listen to pundits, politicians and populists expound on the jobs situation in our country day after day, as if they knew what they were talking about, I’m reminded of the Seinfeld episode where George quits his job as a real estate agent. He sits in Jerry’s apartment and ponders whether he could become the general manager of the Yankees, a sportscaster, getting paid to watch movies, or a talk show host. After the discussion with Jerry, he realizes that he has absolutely no skills that are transferable to another career. Everyone in America would like to be the General Manager of the Yankees or get paid for watching movies, but that isn’t how it works in the real world.

A little reality about the job situation in this country is in order. The unemployment rate reported by the Bureau of Labor Statistics and parroted by the mainstream media is currently 9.6%. Once you stop counting people who have given up looking for jobs and “left the workforce”, discouraged workers, marginally attached workers and workers forced to work part-time, you magically get a 9.6% rate. Using the method of measuring unemployment used during the Great Depression and reproduced by www.shadowstats.com, the real unemployment rate is a depression-like 22.5%. The peak unemployment rate during the Great Depression was 25%. There is no doubt that we are in the midst of 2nd Great Depression, but where are the bread lines and the lines of unemployed winding around the corner? No need. This is the electronic Great Depression – iDepression 2.0. Your 99 weeks of unemployment and food stamps are direct deposited into your bank account so that you don’t have to leave the comfort of your McMansion that you haven’t made a mortgage payment on in the last 14 months. There were no credit cards in 1933. Without a job or a house, you needed to move to where there might be a job. Hence the mass migration from the Midwest to California – ala The Grapes of Wrath. Today, a neighbor in a matching McMansion down the street, with the perfectly manicured lawn, could be unemployed for three years and no one would ever know. They could sustain themselves on unemployment payments, food stamps, and credit cards. Welcome to the iDepression 2.0.

Every politician in the U.S. is running for election on a platform of “creating” new good paying jobs for Americans. Only one problem. Politicians don’t create jobs. Businesses create jobs. When politicians and the Federal Reserve get involved in the job market, bad things happen. The excessively low interest rates put in place by the Federal Reserve created a housing bubble that led to the “creation” of 1 million new construction jobs between 2002 and 2006. Of course, the bubble burst has led to the loss of 2 million construction jobs since 2007. What the myopic pundits on CNBC don’t realize, because they aren’t programmed to think, is that the Greenspan Housing Bubble “created” millions of other jobs that had no chance of being sustained. The number of realtors grew from 750,000 in 2000 to 1.3 million in 2006. We needed hundreds of thousands of new mortgage brokers and appraisers to falsify documents and not conduct proper due diligence. Wall Street needed to hire thousands of new MBA shysters to create fraudulent packages of toxic mortgages and the rating agencies needed to hire thousands of Burger King level thinkers to stamp AAA on the packages of toxic mortgages. These were just the direct jobs created by Easy Al. Home Depot, Lowes and a myriad of other home retailers built thousands of stores to service the needs of all these new “homeowners” and hired hundreds of thousands of clerks, installers, and cashiers. Once the delusion really got going, the “equity” from the homes generated jobs at car dealers, restaurants, cosmetic surgery centers, cruise lines, and yacht retailers.

Job creation has taken place across a wide swath of industries – much more than just residential construction. Sure, developers, builders, and subcontractors saw job growth explode. But it was far more than that. From real estate agents to mortgage brokers, from designers to contractors, plus the many employees of stores like Home Depot (HD) and Lowes (LOW), the Real Estate industrial complex was responsible for a disproportionate percentage of new job creation. From 2001, to the housing peak in 2005, the total number of Realtors, as a percentage of the Total Labor Force, gained nearly 50%.

The reality is that Greenspan, Bernanke, and the rest of the Federal Reserve Governors “created” millions of jobs that were not sustainable. Their policies distorted an already tenuous economic model, dependent upon consumer spending, no savings, and delusions of home wealth. The chart below paints the picture of sorrow. The key points are: 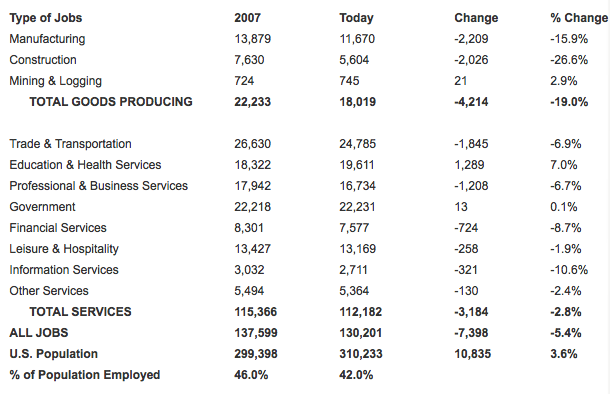 When I hear Obama and his minions blather on about the jobs we have added in the last six months, I want to break something. The truth is that the country should still have 64.4% of the working age population employed today as we did 10 years ago. That means we should have 153.5 million employed Americans today. Instead, we have 130.2 million employed Americans. That is a 23.3 million job deficit and the Obama administration crows when we add 50,000 new jobs in a month. Welcome to iDepression 2.0.

The United States of America is a hollowed out shell of the great industrial machine that dominated the world after World War II. The BLS data unequivocally proves this is so. The chart below compares American jobs in 1970 versus today. The storyline about good paying manufacturing jobs being shipped overseas is absolutely true. The population of the United States in 1970 was 203 million. Today, the population of 310 million is 53% higher. During this same time frame manufacturing jobs have declined from 17.8 million to 11.7 million, a 34% decrease. The corporate oligarchs that run this country will tell you this is due to efficiency. The truth is that these jobs were shipped to China in order to enrich the oligarch CEOs and their MBA efficiency “experts”. The key disturbing facts from this data are as follows: 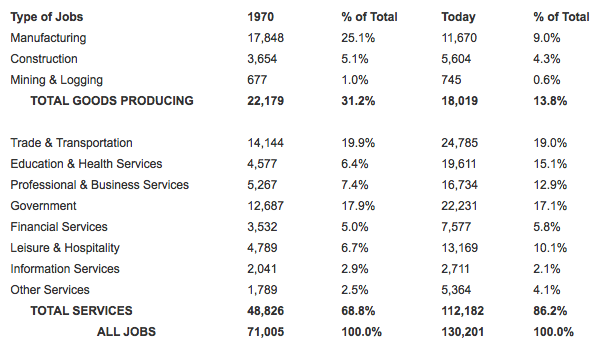 * Goods producing jobs as a percentage of all jobs have declined from 31.2% in 1970 to 13.8% today.
* Lawyers, accountants, financial advisors and other paper pushing professions made up 12.4% of jobs in 1970 versus 18.7% of all jobs today.
* Obese Americans love to go out to restaurants and be served. Hospitality employees now make up 10.1% of the workforce versus 6.7% in 1970.
* Obese, vain, stupid Americans have also benefitted the Health Services and Education industries as the number of nurses, proctologists, teachers, school administrators and Beverly Hills TV surgeons has surged from 6.4% of the workforce to 15.1%. You’d think we would be healthier and smarter with these figures. We’re not.

The politicians attempting to buy your vote today are promising new good jobs. One side is going to impose 100% tariffs on all Chinese crap coming into the country. This will revive domestic manufacturing. Another side is going to create millions of “green” jobs. Imagine all the solar panel jobs coming our way. Someone else is going to rebuild the infrastructure of the country, generating millions of made in America jobs. Too bad there are only 7 million people in the whole country that have a construction background. The Federal Reserve is going to print our way to millions of new jobs by reducing the value of the dollar, again reviving our dormant manufacturing sector. I can see Bethlehem, PA firing up the steel mills that have been dead for 20 years and closing down their casinos. Maybe if we hire some more government bureaucrats to administer the implementation of Obamacare and the financial regulations that are eliminating free checking accounts, the economy will miraculously revive. Paper pushers don’t morph into construction workers. Criminal Wall Street MBAs don’t become petroleum engineers. Unemployed waitresses in Riverside, California aren’t moving to Washington DC to get a great job at Ruby Tuesdays.

The delusions continue. Unless American union workers are willing to work for $7 per hour with no benefits, the manufacturing jobs are not coming back from China. The corporate oligarchs and their bought off cronies in Congress sold the country down the river over the last 40 years. Mega-Corporation profits are at record levels as goods are produced by slave labor in the Far East at 80% lower costs than they could be produced in the U.S. With 86% of the U.S. workforce in the service industry, introducing tariffs on imported goods and devaluing the dollar will further put the squeeze on the American middle class who already have been systematically screwed by the ruling elite over the last 40 years. Our society took 40 years to dig this hole. It is now so deep, there is no way out. But, look at the bright side. At least we don’t have to watch bread lines stretching down the block when we are watching our 52 inch HDTV, holed up in our 5,000 sq ft McMansions, ignoring the monthly mortgage payment bill, and waiting for our unemployment funds to be direct deposited into our bank accounts. I get all teary thinking about it. This is the iDepression 2.0.

The real people of this country who have worked and saved and done the right things have been beaten down. It is time to stand up to those in power and take this country back. We need the moral backbone of Ma Joad at the end of The Grapes of Wrath:

I ain’t never gonna be scared no more. I was, though. For a while it looked as though we was beat. Good and beat. Looked like we didn’t have nobody in the whole wide world but enemies. Like nobody was friendly no more. Made me feel kinda bad and scared too, like we was lost and nobody cared…. Rich fellas come up and they die, and their kids ain’t no good and they die out, but we keep on coming. We’re the people that live. They can’t wipe us out, they can’t lick us. We’ll go on forever, Pa, cos we’re the people.