Dear readers, apologies, the site was down most of the evening. With the higher traffic due to intensive mortgage coverage, I’m pushing the limits of my current setting (despite the little Blogger icon many of you see in the address line, this site is in WordPress….and WordPress does NOT scale well. It’s fine with blogs of normal traffic levels, but at high traffic levels, even with hypercaching, it’s a resource hog. I did cast about last year for a solution. However, the recommendations I got were wildly divergent, this even after providing considerable data. That meant a lot of the respondents really did not understand my service needs, and as a non-techie, I’m in no position to discern which if any might be correct). So please bear with me.

Update 10:00 AM: This wasn’t a normal traffic problem. I’ve been hit by denial of service attacks. The logfiles show massive traffic spikes. So I guess I’m annoying people who like fighting dirty.

Wen warns against renminbi pressure Financial Times. So Wen makes it very clear: the “disaster” that would result is unemployment in China. Therefore everyone else in the world must have unemployment instead. Wen fails to explain how what might indeed be disaster for China is so terrible for the rest of the world.

The Emerging Anti-Trade Coalition, and Its Dangers Robert Reich

IMF supports a new round of Quantitative Easing Eurointelligence

Waivers Address Talk of Dropping Health Coverage New York Times. This shows the stupidity of the Obama plan. You need everyone in one big risk pool. Otherwise, the insurers cherry pick.

The rise and rise of correlation Financial Times. 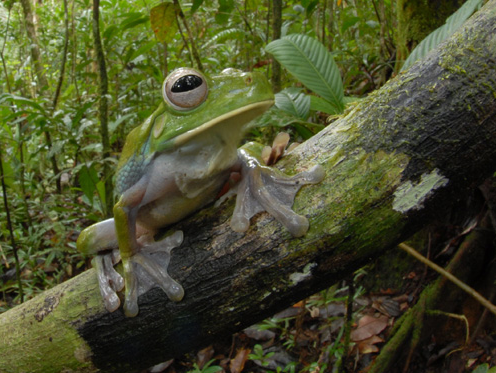 This Australasian tree frog was found living 30 metres above the ground.

Researchers often heard them croaking gutturally from the forest canopy, but only managed to find this one male.

It is probably a new species, though its DNA will have to be checked to be sure.