It is clear that when banks become too big, it harms the economy. Economist Steve Keen says that “a sustainable level of bank profits appears to be about 1% of GDP”, and higher bank profits lead to a Ponzi economy and a depression.

But most mainstream economists dismiss the idea that wealth inequality among individuals causes economic crises.

Of course, some ideologues will argue that even discussing inequality is waging class warfare, and smacks of an attack on capitalism.

However, the father of modern economics – Adam Smith – disagreed.

And as Warren Buffet, one of America’s most successful capitalists and defenders of capitalism, points out:

And as I have previously noted, radical concentration of wealth actually destroys capitalism, turning it instead into socialism for the rich.

Is There a Causal Connection Between Extreme Inequality and Economic Crises?

More to the point, most mainstream economists do not believe there is a causal connection between inequality and severe downturns.

But recent studies by Emmanuel Saez and Thomas Piketty are waking up more and more economists to the possibility that there may be a connection.

Specifically, economics professors Saez (UC Berkeley) and Piketty (Paris School of Economics) show that the percentage of wealth held by the richest 1% of Americans peaked in 1928 and 2007 – right before each crash: 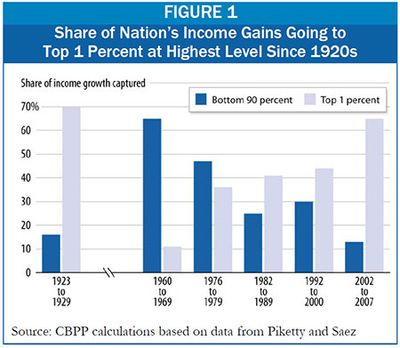 As the Washington Post’s Ezra Klein wrote in June:

Krugman says that he used to dismiss talk that inequality contributed to crises, but then we reached Great Depression-era levels of inequality in 2007 and promptly had a crisis, so now he takes it a bit more seriously.

The problem, he says, is finding a mechanism. Krugman brings up underconsumption (wherein the working class borrows a lot of money because all the money is going to the rich) and overconsumption (in which the rich spend and that makes the next-most rich spend and so on, until everyone is spending too much to keep up with rich people whose incomes are growing much faster than everyone else’s).

Robert Reich has theorized for some time that there are 3 causal connections between inequality and crashes:

First, the rich spend a smaller proportion of their wealth than the less-affluent, and so when more and more wealth becomes concentrated in the hands of the wealth, there is less overall spending and less overall manufacturing to meet consumer needs.

Second, in both the Roaring 20s and 2000-2007 period, the middle class incurred a lot of debt to pay for the things they wanted, as their real wages were stagnating and they were getting a smaller and smaller piece of the pie. In other words, they had less and less wealth, and so they borrowed more and more to make up the difference. As Reich notes:

Between 1913 and 1928, the ratio of private credit to the total national economy nearly doubled. Total mortgage debt was almost three times higher in 1929 than in 1920. Eventually, in 1929, as in 2008, there were “no more poker chips to be loaned on credit,” in [former Fed chairman Mariner] Eccles’ words. And “when their credit ran out, the game stopped.”

And third, since the wealthy accumulated more, they wanted to invest more, so a lot of money poured into speculative investments, leading to huge bubbles, which eventually burst. Reich points out:

In the 1920s, richer Americans created stock and real estate bubbles that foreshadowed those of the late 1990s and 2000s. The Dow Jones Stock Index ballooned from 63.9 in mid-1921 to a peak of 381.2 eight years later, before it plunged. There was also frantic speculation in land. The Florida real estate boom lured thousands of investors into the Everglades, from where many never returned, at least financially.

But I believe there may be a fourth causal connection between inequality and crashes. Specifically, when enough wealth gets concentrated in a few hands, it becomes easy for the wealthiest to buy off the politicians, to repeal regulations, and to directly or indirectly bribe regulators to look the other way when banks were speculating with depositors money, selling Ponzi schemes or doing other shady things which end up undermining the financial system and the economy.

For example, as John Kenneth Galbraith noted in The Great Crash, 1929, Laissez-faire deregulation was the order of the day under the Coolidge and Hoover administrations, and the possibility of a financial meltdown had never been seriously contemplated. Professor Irving Fisher of Yale University – the Alan Greenspan, Robert Rubin or Larry Summers of his day – had stated authoritatively in 1928 that “nothing resembling a crash can occur”.

Indeed, when enough money is concentrated in a couple of hands, the affluent can lobby to appoint to government positions, pay to endow prominent university chairs, and create think tanks and other opportunities for economics professors who spout the dogmas “everything will always remain stable because we’ve got if figured out this time” and “don’t worry about fraud” to gain prominence. For example, Bill Black has written about The Olin Foundation’s promotion over the last couple of decades of these dogmas.

I believe that the fourth factor exacerbates the first three. Specifically, when the wealthy have enough money to drown out other voices who might otherwise be heeded by legislators and regulators, they can:

(Admittedly, there might not always be a direct connection, but all of the factors are at least intertwined.)

Reuters wrote an excellent piece on the issue of inequality and crashes (discussing the first three factors) last month:

Economists are only beginning to study the parallels between the 1920s and the most recent decade to try to understand why both periods ended in financial disaster. Their early findings suggest inequality may not directly cause crises, but it can be a contributing factor.

America has one of the largest wealth gaps among advanced economies. Based on an inequality measure known as the Gini coefficient, the United States ranks on a par with developing countries such as Ivory Coast, Jamaica and Malaysia, according to the CIA World Factbook.

There is little agreement among economists about what precisely links high inequality to crises, which helps explain why so few officials saw the financial upheaval coming.

Rapid expansion of credit is one common thread.

Raghuram Rajan, a professor at the University of Chicago’s Booth School of Business and a former chief economist of the International Monetary Fund, believes governments tend to promote easy credit when inequality spikes to assuage middle-class anger about falling behind.

“One way to paper over the rising inequality was to lend so that people could spend,” Rajan said.

In the 1920s, it was expansion of farm credit, installment loans and home mortgages. In the last decade, it was leveraged borrowing and lending, by home buyers who put no money down or investment banks that lent out $30 for each $1 held.

“Housing credit gave you an instrument to assist those falling behind without them feeling they’re beneficiaries of some sort of subsidy,” Rajan said. “Even if their incomes are stagnant, they feel really good about becoming homeowners.”

Another theory is that concentration of wealth at the top sends investors searching for riskier interest-bearing savings. When so much cash is sloshing around, traditional safe investments such as Treasury debt yield very little, and wealthy investors may seek out fatter returns elsewhere.

Mark Thoma, who teaches economics at the University of Oregon, wonders if the flood of investment cash from the ultra-rich — both in the United States and abroad — encouraged Wall Street to create seemingly safe mortgage-backed securities that later proved disastrously risky.

“When we see income inequality rising, we ought to start looking for bubbles,” he said.

Kemal Dervis, global economy and development division director at Brookings and a former economy minister for Turkey, said reducing inequality isn’t just a matter of fairness or morality. An economy based on consumption needs consumers, and if too much wealth is concentrated at the top there may be times when there is not enough demand to support growth.

“There may be demand for private jets and yachts, but you need a healthy middle-income group (to drive consumption of basic goods),” he said. “In the golden age of capitalism, in the 1950s and 60s, everyone shared in income growth.”

The fact that economists are even examining the link between inequality and financial crises shows just how much the thinking has changed in the wake of the Great Recession.

***Ajay Kapur, a Deutsche Bank strategist, spotted the inequality parallels between the 1920s and the most recent decade, but didn’t see the meltdown coming. The former Citigroup strategist created a stir five years ago when he built an investment strategy around his thesis that essentially divided the world into two camps: the rich and the rest.

Kapur told clients in 2005 that the United States and a handful of other economies were developing into “plutonomies” where the wealthy few powered economic growth and consumed much of its bounty, while the “multitudinous many” shared the leftovers.

Plutonomies come around only once or twice a century, he argued — 16th century Spain, 17th century Holland, the Gilded Age. The last time it happened in the United States was during the “Roaring 1920s”.

“Inequality has risen to the point that it seems to me worthwhile for the U.S. to seriously consider taking the risk of making our economy more rewarding for more of the people,” she wrote in a 2006 speech.

For further background, see this, this and this.

Note: The graphics above are slightly misleading, as Saez notes that inequality is actually worse now than it’s been since 1917.