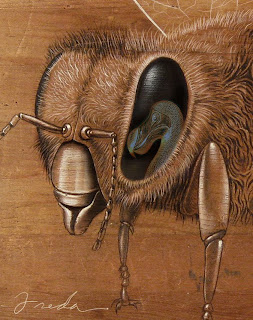 Bees – upon which the entire human food chain rests – are suffering a sharp decline.

As the Guardian pointed out Monday:

The abundance of four common species of bumblebee in the US has dropped by 96% in just the past few decades, according to the most comprehensive national census of the insects [a three-year study published in the Proceedings of the National Academy of Sciences].

***
Sydney Cameron, an entomologist at the University of Illinois, led a team on a three-year study of the changing distribution, genetic diversity and pathogens in eight species of bumblebees in the US.

By comparing her results with those in museum records of bee populations, she showed that the relative abundance of four of the sampled species (Bombus occidentalis, B. pensylvanicus, B. affinis and B. terricola) had declined by up to 96% and that their geographic ranges had contracted by 23% to 87%, some within just the past two decades.

Cameron’s findings reflect similar studies across the world. According to the Centre for Ecology and Hydrology in the UK, three of the 25 British species of bumblebee are already extinct and half of the remainder have shown serious declines, often up to 70%, since around the 1970s. Last year, scientists inaugurated a £10m programme, called the Insect Pollinators Initiative, to look at the reasons behind the devastation in the insect population.

As the Guardian notes, bees are essential for human food production:

Bumblebees are important pollinators of wild plants and agricultural crops around the world including tomatoes and berries thanks to their large body size, long tongues, and high-frequency buzzing, which helps release pollen from flowers.

Bees in general pollinate some 90% of the world’s commercial plants, including most fruits, vegetables and nuts. Coffee, soya beans and cotton are all dependent on pollination by bees to increase yields. It is the start of a food chain that also sustains wild birds and animals.

Insects such as bees, moths and hoverflies pollinate around a third of the crops grown worldwide. If all of the UK’s insect pollinators were wiped out, the drop in crop production would cost the UK economy up to £440m a year, equivalent to around 13% of the UK’s income from farming.

The collapse in the global bee population is a major threat to crops. It is estimated that a third of everything we eat depends upon pollination by bees, which means they contribute some £26bn to the global economy.

The Guardian notes that bees are not the only pollinators which are declining:

But the insects, along with other crucial pollinators such as moths and hoverflies, have been in serious decline around the world since the last few decades of the 20th century. It is unclear why, but scientists think it is from a combination of new diseases, changing habitats around cities, and increasing use of pesticides.

The Guardian points to some of the potential causes of bee decline:

Parasites such as the bloodsucking varroa mite and viral and bacterial infections, pesticides and poor nutrition stemming from intensive farming methods.

A leaked EPA document reveals that the agency allowed the widespread use of a bee-toxic pesticide, despite warnings from EPA scientists.

The document, which was leaked to a Colorado beekeeper, shows that the EPA has ignored warnings about the use of clothianidin, a pesticide produced by Bayer that mainly is used to pre-treat corn seeds. The pesticide scooped up $262 million in sales in 2009 by farmers, who also use the substance on canola, soy, sugar beets, sunflowers, and wheat, according to Grist.

The leaked document (PDF) was put out in response to Bayer’s request to approve use of the pesticide on cotton and mustard. The document invalidates a prior Bayer study that justified the registration of clothianidin on the basis of its safety to honeybees:

Clothianidin’s major risk concern is to nontarget insects (that is, honey bees). Clothianidin is a neonicotinoid insecticide that is both persistent and systemic. Acute toxicity studies to honey bees show that clothianidin is highly toxic on both a contact and an oral basis. Although EFED does not conduct RQ based risk assessments on non-target insects, information from standard tests and field studies, as well as incident reports involving other neonicotinoids insecticides (e.g., imidacloprid) suggest the potential for long-term toxic risk to honey bees and other beneficial insects.

The EPA is still allowing the use of Clothianidin to this day. And see this.

And as I’ve previously pointed out:

To recap: bees are fed junk food totally different from what bees naturally eat with very little nutritional content, taken out of their normal natural environment and shoved into trucks, and then driven all over the nation.

The poor nutrition, exposure to numerous pesticides (and genetically modified foods), and stressful condition of being constantly trucked all over the country are hurting the bees. Why do beekeepers do it? Because high-fructose corn syrup and soy protein are cheap junk, and because the widespread use of pesticides coupled with trucking bees around the country is the low-cost industrial farming business model.

The bottom line is that raising and using bees to pollinate crops in a way that won’t kill so many bees will be more expensive … thus driving up food prices.

And as Agence France-Presse notes, inbreeding may be weakening the bees.

(On a side note, no one has yet asked whether silver iodide or other compounds used in weather modification affect bees. They may not, but someone should test the bees for such compounds and their metabolites so that we can rule out them out as a cause of colony collapse.)

If the bee disappears from the surface of the earth, man would have no more than four years to live. No more bees, no more pollination … no more men!

That might have been a slight exaggeration, but Einstein was right: If we kill off the bees, we will be in big trouble.

There are also reports of birds and fish mysteriously dying world-wide. While these may or may not be connected with the collapse of bee populations, it is a sign that all is not right with the world.

As I wrote two years ago:

Then the bees started disappearing.

Now, its birds. According to CBC, tens of millions of birds are disappearing across North America.

According to the Seattle Times:

Pelicans suffering from a mysterious malady are crashing into cars and boats, wandering along roadways and turning up dead by the hundreds across the West Coast, from southern Oregon to Baja California, Mexico, bird-rescue workers say.

Frogs and bees are so different from people that they are easier to ignore. But birds are larger, more complicated, warm-blooded animals, and thus closer to us biologically.

People will be in real trouble unless we figure out why the amphibians, bees and birds are dying.