Proposed legislation in Virginia, House Bill 1506, which if passed would eliminate the role of the electronic registry system MERS in that state by requiring every mortgage transfer to be recorded in the local courthouse, is having the salutary effect of exposing more information about this generally less than forthcoming company.

Various interested parties offered testimony about the bill. One particularly interesting presentation came from a process and systems expert, Daniel Pennell, who was operating in a private capacity as a concerned citizen. His presentation raises numerous red flags about MERS.

We’ve pointed out troubling weakness in MERS’s operational controls and systems in past posts. Our Richard Smith, a capital markets IT specialist who has worked in high transaction volume environments, provided comments on statements made by MERS officers in various depositions about how various procedures worked. He found serious shortcomings in their “electronic handshake” process and authentication, as well as troubling open questions about access control and an audit trail. From his discussion of the electronic handshake:

I agree about the laxity: 1) if there is collusion outside the system, just about any set of transfers could be input and confirmed by two parties. Where is the dual-keying and management supervision? This ends up at the accountability question, below. 2) There’s no indication of any reconciliation process, ie daily checking for transfers that don’t match and sorting out who made a mistake. It beggars belief that there wouldn’t be confirmation failures, with human beings on either side of the transaction.

Combine 1 & 2 and it’s easy to see how the physical legal reality and the electronic record might not agree. As the lawyer keeps emphasizing in his questions, there is nothing here which would make a chain of transfers evidentiary of anything, if it’s the paperwork that actually counts legally. It does seem to be just a (potentially shaky) electronic copy of the physical docs.

Other observations: the guy being interrogated seems like a low level operator who doesn’t necessarily understand the system too well (*update* after closer reading FUCK ME, he’s the CEO).

Yves here. He appears to be on the verge of being the ex-CEO.

The Pennell assessment comes at MERS from the perspective of overall process flows, system complexity and propensity to error. The entire presentation is very much worth reading, and as an inducement, I’m highlighting these two slides (click to enlarge): 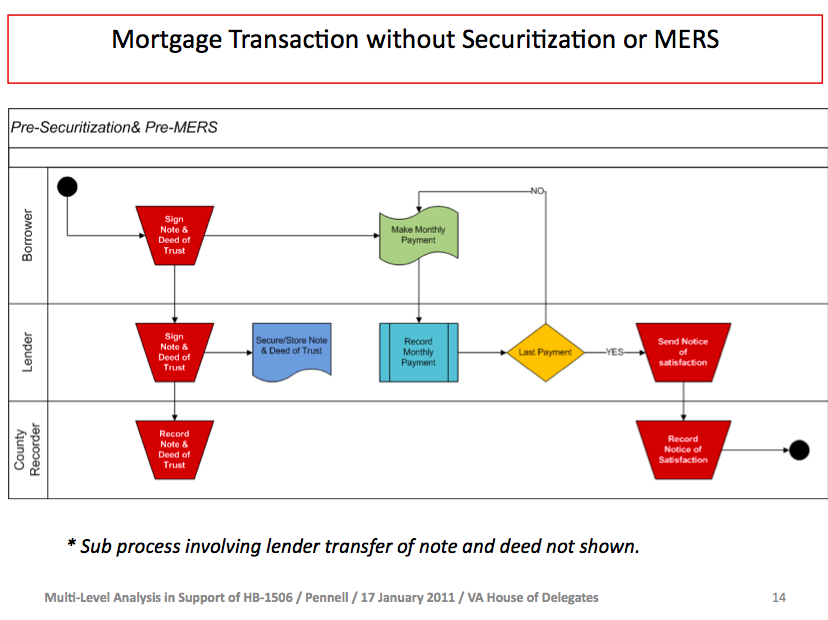 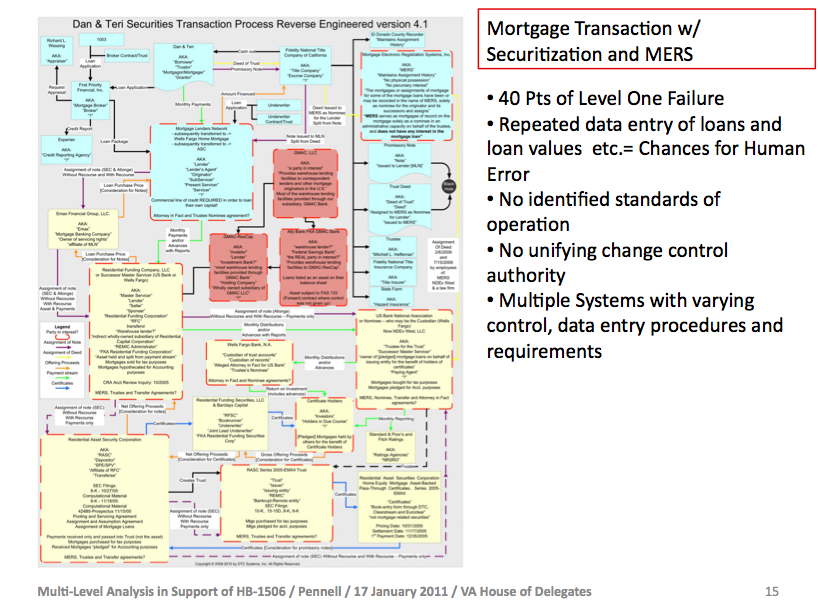 Here is the full presentation.

Pennell goes through a series of known problems with securitization (some of which extend beyond MERS’s purview) and concludes, “Any of these would satisfy the definition of an out of control process.”

Needless to say, the closer you get to MERS, the uglier it looks.