It is a tribute to the messaging skills of the American corpocracy that a phony budget crisis in Wisconsin has been used to scapegoat unions. This row serves as a very convenient way to shift attention from the real cause of fiscal stress in states that have serious budget gaps (yes, there are a very few states like New Jersey that have gaping pension shortfalls, thanks to years of government use of wildly optimistic return assumptions as an excuse to underfund them, but contrary to the railing of Chris Christie, his state’s problem is an outliers).

First, let’s debunk a couple of issues thrown out by Wisconsin governor Walker’s camp before turning to the real culprit in state budget’s supposed tsuris. The state budget is not in any kind of real peril. The Wisconsin Legislative Fiscal Bureau estimated that the state would end fiscal year 2011 with a gross positive balance of $121. 4 million and a net balance (after mandated reserves) of $56.4 million. Walker asserts there is actually a $137 million deficit. But where did that change come from? Lee Sheppard of Forbes estimated that Walker’s tax cuts for businesses would cost at the bare minimum $100 million over the state’s biennial budget cycle. Other sources put a firmer stake in the ground and estimate the costs at at $140 million. Viola! Being nice to your best buddies means you need to go after someone else.

The second major canard is that Wisconsin state employees are overpaid. If any are, it sure isn’t the teachers, nurses, or white collar worker. Note this chart for Wisconsin workers by Menzie Chinn at Econbrowser (hat tip Mike Konczal) is of data on total compensation, meaning it includes benefits such as pensions and health care. And as Chinn notes in comments to the post, the disparity in the 1990s and last decade would have been more skewed in favor of private sector workers: 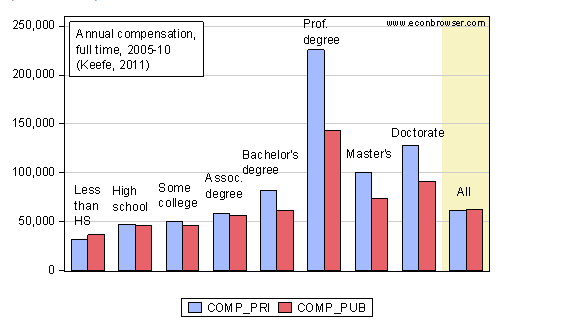 The one group in which public sector workers are modestly more highly paid is non-high-school graduates, which one assumes include sanitation workers and janitors. Even then, the premium is not large.

Now that we have dispatched Wisconsin, why is is proving to be such a fertile ground for promoting urban legends, or at best partial truths? Even in states where budget stresses are real and acute, the two real causes are getting virtually no attention.

The first is that the collapse in tax receipts was the result of the global financial crisis. That’s the 800 pound gorilla in the room that everyone seems to ignore. But second, as a very good article by Richard Wolff in the Guardian stresses, is that corporations no longer pay their fair share of total taxes (emphasis his):

US corporations resented that arrangement, and after the war, they changed it. Corporate profits financed politicians’ campaigns and lobbies to make sure that income tax receipts from individuals rose faster than those from corporations and that tax cuts were larger for corporations than for individuals. By the 1980s, individual income taxes regularly yielded four times more than taxes on corporations’ profits…

Corporations repeated at the state and local levels what they accomplished federally. According to the US Census Bureau, corporations paid taxes on their profits to states and localities totalling $24.7bn in 1988, while individuals then paid income taxes of $90bn. However, by 2009, while corporate tax payments had roughly doubled (to $49.1bn), individual income taxes had more than tripled (to $290bn).

Now it should be no surprise that Walker is trying to push this sorry trend even further. The Koch Industries PAS was the second biggest donors to his gubernatorial campaign. It also gave $1 million to the Republican Governors Association, which then spent $65,000 through other channels to support Walker.

In England, the severity of cuts resulting from national austerity measures has led to a pushback against similarly low tax rates paid by corporations (see this article, “The conspiracy against the public” by Tax Research UK to get a sense of the discourse across the pond). The UK Uncut movement is at the forefront of this effort to end tax dodges by multinational corporations and rich individuals. It might be time for all of us to throw our weight behind its younger sister, US Uncut.