The level of complaints about servicer screw ups in the HAMP program and more recent horror stories from borrowers not seeking loan modifications confirms something we’ve noted on this blog: that servicers fee structures aren’t set up for them to handle the workload associated with high volumes of foreclosures. Accordingly they devised processes like robosigning, which are legally impermissible, as a way to contain costs. Many of the abuses still have not gotten the attention they deserve. For instance, the most widely used foreclosure platform for the industry, that of Lender Processing Services, does not have a field in its software to allow a foreclosure of a person in a Chapter 13 bankruptcy to be processed differently. This results in impermissible charges. For instance, when a Chapter 13 debtor is in a bankruptcy plan and sending his payments to the Chapter 13 trustee, who in turn disburses them to various creditors, there is no such thing as a late payment. But if the old borrower due date was the 10th of the month and the trustee sends checks on the 15th, the bank will record a late fee. Then when the borrower emerges from Chapter 13 which means he is current on all the debt under the bankruptcy plans, the bank will send him a bill for what is typically several thousand dollars of fees. The borrower who is still under a lot of financial stress (Ch. 13 plans by design soak up all of a borrower’s income) then has to spend money he does not have to go to court to get the charges removed.

We also pointed in previous posts to signs that foreclosure filings had fallen markedly versus year prior levels. From Bloomberg:

A total of 225,101 U.S. properties received notices of default, auction or repossession, down 14 percent from January and 27 percent from February 2010, the Irvine, California-based data seller said today in a statement. The number was the lowest since February 2008, and the year-over-year decrease was the biggest since the company began keeping records in 2005…

“It’s clearly taking the lenders and servicers longer than anyone had anticipated,” Rick Sharga, RealtyTrac’s senior vice president, said in an e-mail. “Beyond that, the industry itself is in a state of dysfunction.”….A glut of resubmitted paperwork is “taxing the resources” of loan servicers, and judges are demanding greater scrutiny in states where courts oversee foreclosures, Sharga said….

In Florida, a judicial state that’s been among the hardest- hit by the crisis, total foreclosure filings plunged 65 percent from a year earlier. It still ranked second for total filings.

The Florida slowdown may also reflect the fact that the state attorney general is investigating the state’s major foreclosure mills. One of the very biggest, the Law Offices of David Stern, announced this week that it was closing at the end of March.

Mike Konczal also highlighted a very illuminating chart from a paper by Diane Thompson of the National Consumer Law Center, Why Servicers Foreclose When They Should Modify and Other Puzzles of Servicer Behavior, which shows how payments to servicers influence their behavior in foreclosures: 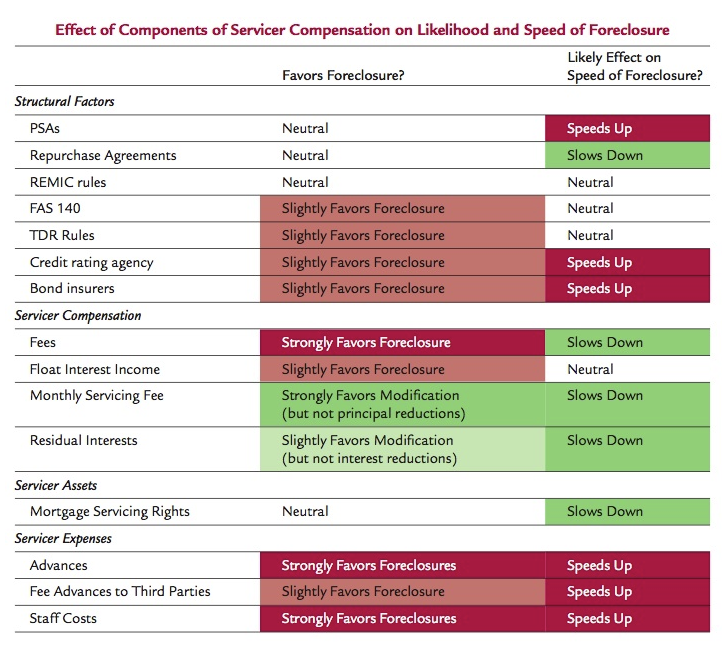