Yves here. Please be sure to read to the end of the post, where Miles discusses what level of equity he thinks banks should carry.

The global crisis has called into question how banks are run and how they should be regulated. Highly leveraged banks went under, threatening to drag down the entire financial system with them. Here, David Miles of the Bank of England’s Monetary Policy Committee, shares his personal views on the optimal leverage for banks. He concludes that it is much lower than is currently the norm.

At the height of the financial crisis, many highly leveraged banks found that their sources of funding disappeared – withdrawn due to fears over the scale of losses. In the fallout from this banking crisis, the economic damage has been enormous. The recession that hit many developed economies in the wake of the financial crisis was exceptionally severe and the scale of government support to banks has been large and it was needed when fiscal deficits were already ballooning.

Setting new capital requirements is now a major policy issue for regulators – and ultimately governments – across the world. The recently agreed Basel III framework will see banks start to use more equity capital to finance their assets than was required under previous sets of rules. This has triggered warnings from some about the cost of requiring banks to use more equity (see, for example, Institute for International Finance 2010 and Pandit 2010).

The argument that balance sheets with very much higher levels of equity funding, and less debt, would mean that banks’ funding costs would be much higher is widely believed. But there are at least two powerful reasons for being sceptical about it.

In the UK and the US banks once made much greater use of equity funding than they do today. But during that period, economic performance was not obviously far worse and spreads between reference rates of interest and the rates charged on bank loans were not obviously higher. This is prima facie evidence that much higher levels of bank capital do not cripple development, or seriously hinder the financing of investment.

Conversely, there is little evidence that investment or the average (or potential) growth rate of the economy picked up as leverage moved sharply higher in recent decades. Figure 1 shows a long-run series for UK bank leverage (total assets relative to equity) and GDP growth. There is no clear link. Between 1880 and 1960 bank leverage was – on average – about half the level of recent decades. Bank leverage has been on an upwards trend for 100 years; the average growth of the economy has shown no obvious trend.

Furthermore, it is not obvious that spreads on bank lending in the UK were significantly higher when banks had higher capital levels.
Figure 1. UK Banks leverage and real GDP growth (10-year moving average) 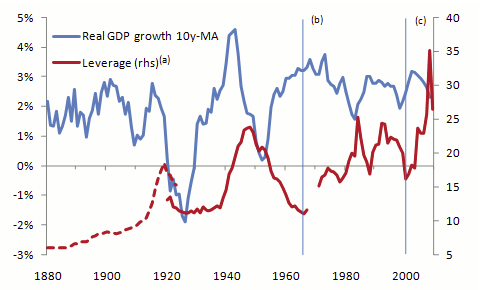 Source: UK: Sheppard, D (1971), The growth and role of UK financial institutions 1880-1962, Methuen, London; Billings, M and Capie, F (2007), ‘Capital in British banking’, 1920-1970, Business History, Vol 49(2), pages 139-162; BBA, ONS published accounts and Bank calculations.
Notes: (a) UK data on leverage use total assets over equity and reserves on a time-varying sample of banks, representing the majority of the UK banking system, in terms of assets. Prior to 1970 published accounts understated the true level of banks’ capital because they did not include hidden reserves. The solid line adjusts for this. 2009 observation is from H1. (b) Change in UK accounting standards. (c) International Financial Reporting Standards (IFRS) were adopted for the end-2005 accounts. The end-2004 accounts were also restated on an IFRS basis. The switch from UK GAAP to IFRS reduced the capital ratio of the UK banks in the sample by approximately 1 percentage point in 2004.

The absence of any clear link between the cost of bank loans and the leverage of banks is also evident in the US. Figure 2 shows a measure of the spread charged by US banks on business loans over the yield on Treasury Bills. The chart shows that the significant increase in leverage of the US banking sector over the twentieth century was not accompanied by a decrease in lending spreads, indeed the two series are mildly positively correlated so that as banks used less equity to finance lending the spread between the rate charged on bank loans to companies and a reference rate actually increased. Of course such a crude analysis does not take into account changes in banks asset quality or in the average maturity of loans or changes in the degree of competition. 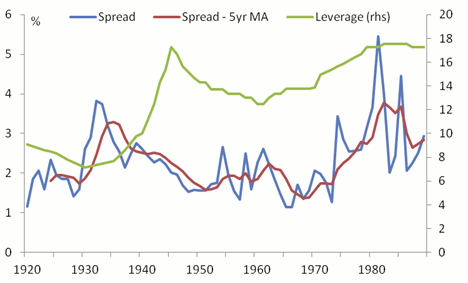 The second reason for being sceptical that there is a strong positive link between banks using more equity and having a higher cost of funds is that the most straightforward and logically consistent model of the overall impact of higher equity capital (and less debt) on the total cost of finance of a company implies that the effect is zero.

The Modigliani-Miller theorem implies that as more equity capital is used the volatility of the return on that equity falls, and the safety of the debt rises, so that the required rate of return on both sources of funds falls. It does so in such a way that the weighted average cost of finance is unchanged (Modigliani and Miller 1958).

There are certainly reasons why the Modigliani-Miller theorem is unlikely to hold exactly. But it would be a bad mistake to simply assume that the reduced volatility of the returns on bank equity deriving from lower bank leverage has no effect on its cost at all.

So in calculating cost and benefits of having banks use more equity and less debt it is important to take account of a range of factors including:

The extent to which the required return on debt and equity changes as funding structure changes.

The extent to which changes in the average cost of bank funding brought about by shifts in the mix of funding reflect the tax treatment of debt and equity and the offsetting impact from any extra tax revenue received by government.

The extent to which the chances of banking problems decline as equity buffers rise – which depends greatly upon the distribution of shocks that affect the value of bank assets.

The scale of the economic costs generated by banking sector problems.

Few studies try to take account of all these factors (one notable exception being Admati et al. 2010); yet failure to do so means that conclusions about the appropriate level of bank capital are not likely to be reliable. In a recent paper together with Jing Yang and Gilberto Marcheggiano, we take account of these factors and present estimates of the optimal amount of bank equity capital (Miles et al. 2011).

We conclude that even proportionally large increases in bank capital are likely to result in a small long-run impact on the borrowing costs faced by bank customers. Even if the amount of bank capital doubles our estimates suggest that the average cost of bank funding will increase by only around 10-40 basis points. (A doubling in capital would still mean that banks were financing more than 90% of their assets with debt). But substantially higher capital requirements could create very large benefits by reducing the probability of systemic banking crises – crises which are very costly (as shown by Reinhart and Rogoff 2009). We use data from shocks to incomes from a wide range of countries over a period of almost 200 years to assess the resilience of a banking system to these shocks and how equity capital protects against them. In the light of the estimates of costs and benefits we conclude that the amount of equity funding that is likely to be desirable for banks to use is very much larger than banks have had in recent years and higher than minimum targets agreed under the Basel III framework.

Were banks, over time, to come to use substantially more equity and correspondingly less debt, they would not have to dramatically alter their stock of assets or cut their lending. The change that is needed is on the funding side of banks’ balance sheets – on their liabilities – and not their assets. The idea that banks must shrink lending to satisfy higher requirements on equity funding is a non-sequitur. But there is a widely used vocabulary on the impact of capital requirements that encourages people to think this will happen. Capital requirements are often described as if extra equity financing means that money is drained from the economy – that more capital means less money for lending.

Consider this from the Wall St. Journal, in a report on the Basel negotiations on new rules over bank capital:

The proposed rules would have driven capital requirements up for all banks, forcing the quality and quantity of these capital cushions to grow …… That would be expensive for banks, because the money sits on banks’ balance sheets and essentially can’t be invested to bring in more profits. (Paletta 2010)

This is pretty much the opposite of the truth. At the risk of stating the obvious, equity is a form of financing; other things equal a bank that raises more equity has more money to lend – not less.