Former central banker Willem Buiter once remarked that the Federal Reserve’s “unusual and exigent circumstances” clause, which enables it to lend to “any individual, partnership or corporation” if it can’t get the dough from other banks, allows the Fed to lend against a dead dog if it so chooses.

It looks like the US central bank did precisely that.

Readers no doubt know that Bloomberg entered into a hard-fought battle over its Freedom of Information Act request to compel the Fed to release the details of its various lending programs during the crisis to the public. The banking regulator used the patently bogus excuse that revealing that information could damage the competitive positions of firms that had received the loans. That was patently bogus since all the major recipients are in the market on an ongoing basis and rejiggering their exposures based on market opportunities.

The only party at risk at this juncture was the Fed, since it would have its decisions scrutinized. And in a democracy, it is of vital public interest that an organization as influential as the Fed, which committed large amounts of funding outside Constitutionally-mandated budget processes, be held accountable for its actions.

The information was released yesterday and Bloomberg has provided a first cut on a small but juicy portion of it, the Primary Dealer Credit Facility. From a risk standpoint, the loans mace under this program violated the central bank guideline known as the Bagehot rule: “Lend freely, against good collateral, at penalty rates”. That is the prescription if the borrower is facing a bank run, meaning a liquidity crisis. The fact that 72% of the Fed’s loans on September 29 from the Primary Dealer Credit Facility were junk or equivalent (defaulted and unrated securities or equity) is further proof that many financial firms were facing a solvency, not a liquidity, crisis. The breakdown:

Equities comprised $71.7 billion, or 43.6 percent of the total. High- yield debt, including the defaulted issues, accounted for $18.4 billion, or 11.2 percent. Collateral of unknown rating was $28 billion, or 17 percent…..The U.S. central bank allowed borrowers to use $929 million in market-valued debt that had gone into default, rated D, as collateral on that day, 2008, more than the $905.5 million in Treasuries that were pledged…

And the haircuts were so low that the ideas that these were collateralized loans is a joke. The “collateralization” was a necessary legal fiction for throwing cash at anyone who thought they needed it:

The Fed loans on Sept. 29, 2008, represented a 5.49 percent “collateral cushion,” the amount by which the pledged assets exceeded the loan value….

To put things in perspective, the market haircut on most debt securities during the period of the crisis starting in September 2008 was above 40 percent,” [Craig] Pirrong [a finance professor at the University of Houston} said….The cushion “was far too small for the risk of the underlying collateral,” Pirrong said. “Collateral that’s junk or defaulted debt and equities at a time when market volatility was huge is pretty eye opening.”

It wasn’t just “most debt securities” that had tanked in value. Consider the fate of AAA rated ABS CDOs, which were one of the most serious black holes at virtually all of the dealer banks. We reproduced this chart on repo haircuts in ECONNED: 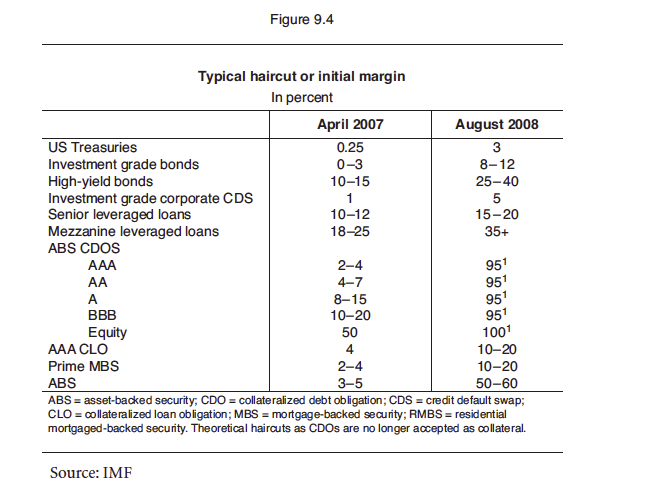 Note these prices were as of August; things were clearly even worse post Lehman. A 95% haircut on AAA rated ABS CDOs means the paper was effectively worthless.

This first cut by Bloomberg also shows that Morgan Stanley was the biggest user of the facility, receiving $61.3 billion of funds for securities “worth” $66.5 billion, 71.6% of which was junk or unrated. As eye-popping as those numbers are, the funds received are less than half the fall in Morgan Stanley’s liquidity pool in the two weeks after the Lehman failure, per Economics of Contempt. Merrill Lynch was second, getting $36.3 billion in funding for $39.1 billion of collateral, 83.4% of which was junk or unrated.

A separate Bloomberg story on the discount window operations found that 70% of the credit extended, including four of the five biggest users during the peak usage week, in October 2008, were foreign. More high (or more accurately, low) points:

U.S. Federal Reserve Chairman Ben S. Bernanke’s two-year fight to shield crisis-squeezed banks from the stigma of revealing their public loans protected a lender to local governments in Belgium, a Japanese fishing-cooperative financier and a company part-owned by the Central Bank of Libya.

Dexia SA, based in Brussels and Paris, borrowed as much as $33.5 billion through its New York branch from the Fed’s “discount window” lending program, according to Fed documents released yesterday in response to a Freedom of Information Act request. Dublin-based Depfa Bank Plc, taken over in 2007 by a German real-estate lender later seized by the German government, drew $24.5 billion…

“What in the world are we doing thinking we can pass out tens of billions of dollars to banks that are overseas?” said [Ron] Paul, who has advocated abolishing the Fed. “We have problems here at home with people not being able to pay their mortgages, and they’re losing their homes.”

Expect some fun Congressional hearings in the not-too-distant future.

A further remark: the fact that Bloomberg can say anything intelligent at this juncture is a testament to the cleverness of its reporters. The central bank quite deliberately responded to the request by providing the information in the most disaggregated, difficult to work with form imaginable. The central bank did a version of the same trick with its data on Maiden Lane II. The holdings of that asset management vehicle were various real estate exposures, some of which were hedged. The hedges were reported separately from the bonds and loans. Clearly, Blackrock, the asset manager, had far more useful and understandable reports that they used internally and provided to the New York Fed, but those were withheld. This data will presumably be as enticing as the Wikileaks cables, so enough eyeballs on it will eventually overcome the Fed’s efforts to hinder analysis.

Given the voluminous amount of information provided, future FOIA requests may need to explicitly include that the relevant government body provide information in the form in which it is used internally, including any higher level aggregations, to prevent future “fuck yous” in the form of technically permissible but nevertheless obstructionist compliance.