By Drew Keeling, Department of History, University of Zurich. Cross posted from VoxEU

Mass international migration is inherently controversial. This column looks at how the US immigration policies before 1914 sought to manage mass migration across the North Atlantic. It suggests that, with migration today seemingly neither well-controlled nor well-managed, the managed laissez-faire approach of a century ago is regaining relevance.

Across often contentious public debates over migration lies a widely-shared view that current policies are “broken” and in need of basic repair (see for example, Facchini and Testa 2011 on this site). Compromises to revise migration policy remain elusive, however, in part due to divergences of opinion over what causes mass cross-border movement to begin with. Given long-identified pushes and pulls propelling long-term international relocation, the question can be focused by inverting it to ask: What fundamentally limits migration?

A superficial consensus points to legal restrictions as being the operative constraints on migration, but the supporting evidence for this is less solid than often realised (see Keeling 2008a). In actual practice, legal restrictions are often difficult to interpret or enforce or both. Moreover, even very effective legal controls do not necessarily preclude the efficacy of other, non-legal, constraints, notably the availability of jobs, which are the main motivation for labour migration.

The well-established salience of labour market conditions in migrant destinations has been further confirmed by a fall-off of immigration during the latest economic downcycle (see Hatton and Williamson 2009). A recent study, by a US “think tank” favouring lower immigration, captioned ‘Fewer Jobs, More Immigrants,’ questions the significance of such economic considerations. The study, however, acknowledges an insufficiency of data on illegal migration, outward flows and census-related information at other than ten year intervals (Camorata 2010).

Examining a prior era of globalisation helps compensate for such statistical limitations. In contrast to migration today, the transatlantic flow of 22 million Europeans to the US between 1870 and 1914 was clearly documented and almost entirely legal. Nearly all arrived on a major steamship line at one of four US entry ports, and were tracked under increasing regulations, which permitted entry to nearly all of them. A shift to “restrictionism” in the wake of World War I, however, meant that, whereas over 90% of would-be migrants were permitted relocation from Europe to the US before 1914, over 90% have been blocked since the early 1920s. With some regional divergence, the same sharp policy divide basically applies globally, but migration rates have changed less dramatically. Annual migration across the North Atlantic between 1815 and 1914 rarely exceeded 1-2% of source or destination populations. This is not much greater than rates of international migration in recent decades.

It is commonly assumed that transportation costs much more severely limited long distance movement a century and more ago, and that strict legal barriers today thus essentially substitute for much higher cost barriers before 1914. Historical data, however, do not corroborate any such great cost reduction across the key North Atlantic region.

Between 1900 and 1914 the steamship steerage fare between Europe and the US averaged about $30. With low-skilled weekly wages of about $10, three weeks wages in America could recoup the ticket price. Today, at $10 per hour, slightly above the US legal minimum wage, a North Atlantic economy airfare of about $800 could be earned in two forty-hour work weeks. Given typical migrant sojourns of a couple of years or more, and comparing a century ago to now, a reduction of a week or two in the average time-to-earn back migration costs is almost negligible (Keeling 2007).

Migrant smugglers nowadays charge their clients/victims a multiple of travel costs. For some migrants, legal restrictions have thus effectively and substantially increased the overall costs of migration. The ability of smugglers to conduct a brisk, if risky, business at such rates, however, suggests migration volumes that are relatively insensitive to relocation costs. This was clearly the case on the pre-1914 North Atlantic.

The figure, based on my recent research, compares three new or revised time series for North Atlantic migration, steerage fares, and demand for immigrant labour for the quarter century ending in 1913. Calendar year data on steerage passengers to New York (entry point for two-thirds of US immigrants then) are more consistent and complete than fiscal year immigration figures. Liverpool-to-New York steerage fares of the Cunard line are quite representative of other lines and routes then, and fares accounted about half of total migration costs, and more than half of the fluctuations in such costs. Finally, few migrants worked on farms, so non-farm employment is a reasonable proxy for tracking jobs available to foreign-born workers in the US (Keeling 2008b, 2008c and 2011 and Weir 1992). 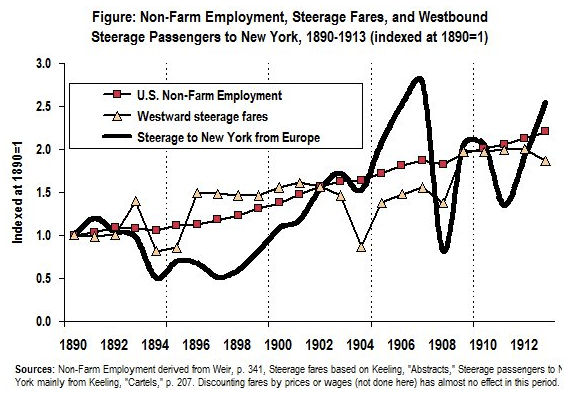 These data clearly show migrant inflows tracking long term employment growth, whereas travel fares had little influence on such flows. The increase in fares over the period did not prevent a still-faster increase in migration, and fare drops during recessions did not prevent sharp declines in migration. Clearly, Europeans moved to America in large numbers when jobs were plentiful, even if fares were relatively high, and tended to avoid the US during economic slumps, even if travel costs fell.

The self-limiting capacity of pre-World War I migration was reasonably well-understood and reflected in contemporary policies. The US “Immigration Commission” of 1911 found that migration from Europe was “almost entirely attributable to economic causes,” the emigrant then being “essentially a seller of labour seeking a more favourable market”. A leading critic of the commission went further in 1912, concluding that “demand for labour determines the character, as well as the volume of immigration.” Amidst the cyclical downturn of the mid-1890s, another commentator wrote that

…immigration has practically come to a standstill…letters to the old fatherland [contain] tales of woe…Not even the sternest statute could be more restrictive of immigration than these natural regulators of the ebb and flow in the tide of aliens” (Hourwich 1912, Joseph Senner 1894).

US regulations in the early 20th century sought to enhance rather than alter self-limited mass migration. In 1905, US President Theodore Roosevelt enunciated the rationale for aiming at quality improvement and risk reduction rather than control of quantity: “We cannot have too much immigration of the right sort, and we should have none of the wrong sort.” The goal was to make migration safe and supervised. Passengers arriving from Europe were inspected and a few of them rejected, based not on origin, but on health and fitness for work. The approach acknowledged concerns about the social burdens of migration while allowing essentially unfettered reaping of its benefits.

Why have today’s advocates of immigration reform, particularly pro-immigration reform, not appealed more forcefully to examples from the efficiently-run open borders of the pre World War I period? A complete answer might require an entire separate article, but two key reasons can be noted. The first is the paucity of travel cost data in prior historical studies, which has led to an exaggerated sense of how different the early 21st and early 20th centuries are in this respect. A second and more powerful reason is that in several other important respects, that passport-less era truly is remote from today. More attention to it nonetheless makes sense. Internationalisation of markets for goods, capital, land, commodities, and information in recent decades, somewhat akin to the pre-1914 open-borders period, have paradoxically also been accompanied by a long term growth in labour migration from poor to wealthy countries, despite much higher legal barriers to international relocation than in the earlier epoch (Massey 2000).

Policy regimes, installed after World War I to allow and handle relatively modest and mostly non-economic-oriented movements of people across borders (family unification, refugees), are becoming increasingly obsolete after decades of considerable labour market migration. Cracking down on illegal immigration encourages more adept versions of it. Amnesties sow the seeds of future amnesties. Closing some legal loopholes encourages the development of others. Unintended consequences are surpassing intended ones (Martin et al. 2008). Political impasse on reform has reinforced incompatible and unrealistic desires. Mass migration is too small to significantly alleviate the problems of aging rich country populations or the demographic growth challenges of poorer countries, yet too large to be left to willy-nilly politics as usual. There are no magic solutions, but better understanding functionally successful past policies could help foster a more practical choice framework for the future.

Obviously there is no going back –if anyone wanted it- to the world of a century ago when the Americas, with 150 million people, had open doors to 450 million Europeans, while a billion Asians were instead mostly governed by some degree of European imperialism. Migration volumes determined mainly by labour markets would be infeasible today. Policies, however, might conceivably replicate the pre-1914 system’s success in leveraging the internal self-limiting features of migration to make it clearer, smoother, easier to cope with, and ultimately more widely advantageous.

But migration is also a defining, and with judicious oversight potentially quite positive, characteristic of human civilisation. A decade ago, migration scholar Douglas Massey recommended accepting migration as a “natural outgrowth” of the global economy, and designing policies to augment “desirable features” and slow down “negative consequences.”(Massey 2000). This proposed approach not only remains cogent today, it also is a reasonable approximation of the policies actually followed successfully on the North Atlantic a century ago.

Effective management of future migration will need to include legal restrictions, but laws, walls, and guards cannot substitute for competent adaptation to population shifts and efficient operation of labour markets. Policymakers a century ago realised this, and we can learn from their experience.