We managed to miss out on the parabolic rise of silver, which has now been followed by a stomach-churning 12% fall in thin holiday trading. And commodity markets are less deep than securities markets. Recall that the famed peak of gold in 1980 to $850, was a violent spike up, vasty high than the level two days earlier or two days later.

Silver in particular has been closely watched due to the presence of very large short interests which were apparently partially closed out late last week leading to some very serious intraday volatility. Today we have this cheery development, courtesy Jesse: 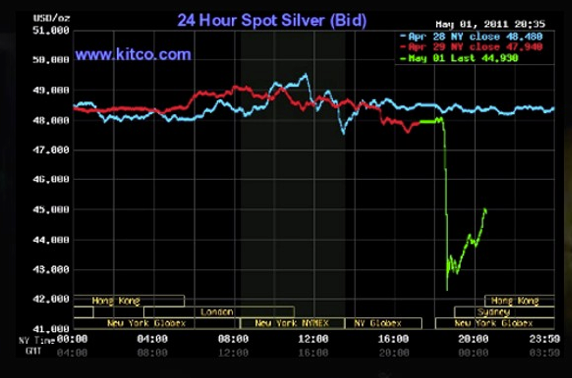 Now this wild ride might not be newsworthy in and of itself, but it is also accompanied by rumors of Serious Pain, presumably at JP Morgan, which quite a few market participants think has been on the wrong side of this trade:

The Comex is facing a default, and the powers that be are very nervous since it involves at least one of the TBTF monstrosities.

Shock and awe in the thin Sunday night trade, running the stops of the new futures holders whose options were filled. Even more heavy handed and blatant than usual.

Shedlock (hat tip reader furzy mouse) is of the view that everyone who wanted to buy silver is “all in”. The rapid runup in the last few months looks like a classic blowoff, and I’ve been more generally of the view that we are having a 2011 rerun of the liquidity-fuelled commodities bubble of the first half of 2008. But we only saw some hedgies (apparently including Magnetar!) get serious bloody noses by getting that trade wrong. A big default at an exchange by a major bank is a whole different kettle of fish. And with this a holiday in London, we aren’t getting as much gossip intelligence as we normally might. Stay tuned!