Hope of the Lone Pine: As Tree Clings to Life, So Does Japanese City Wall Street Journal

Vladimir Putin ‘sent to Russia by God’ Telegraph (hat tip reader Swedish Lex). But is that really a good thing? If I remember my Bible correctly, God visited all sorts of travails on people because they deserved it or even just for sport (Job).

The European project is doomed without reform Credit Writedowns

James Murdoch could face criminal charges on both sides of the Atlantic Guardian. In America? Surely you jest. We don’t arrest powerful businessmen.

Some older but germane News of the World/Murdoch stories:

News of the World surveillance of detective: what Rebekah Brooks knew Guardian

Has Nancy Pelosi Been Marginalized in the Debt Debate? Swampland. Question bogus assumptions and you get pushed aside.

Bigger government is needed for the US economy – OSO’s New Deal One Salient Oversight. What is intriguing is that a former austerian is now arguing for significant spending.

She always used to assume this coy pose whenever I came into view of her bed.

She’s older now but just as sweet natured, and a beautiful Tricolor Beagle. 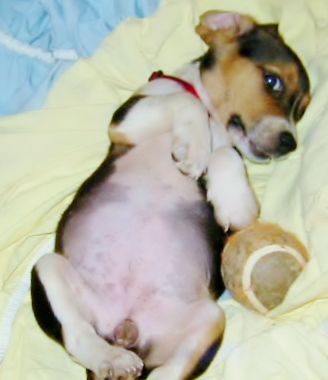