By Delusional Economics, who is unhappy with the current dumbed-down vested interest economic reporting. Cross posted from MacroBusiness

With the economic world firmly focussed on the US debt debacle this week it is likely that Europe will slip off the radar a little. I suspect, as many people do, that for the US there will be an eleventh hour resolution followed by a short lived bounce in the world markets. Once that bounce heads back to earth again it is likely that the world’s eyes will turn back to Europe. There is much to see.

It hasn’t taken very long for the world to wake up to the fact the that EFSF is only going to work if there is a sudden stabilisation of Europe’s weak economies. That obviously isn’t about to happen so the markets have already started pecking at the weak links.

Spain’s 10-year bonds declined, with yields ending the week above 6 percent for the second time this year after Moody’s said it is reviewing the nation’s Aa2 classification.

Apart from the fact that two contributors are already in strife there is also the small issue that the EFSF may not even be ready to help Greece in time for the next tranche.

The euro zone’s sovereign rescue fund may not be ready to pay the next batch of loans due to Greece by mid-September, euro-zone officials said, requiring Italy and Spain to lend directly to Greece even as both countries face alarmingly high borrowing costs themselves.

The issue was discussed by euro-zone finance officials in a conference call Thursday, including the possibility that Italy and Spain would opt out of making the next payment, one official said.

“We’re trying to get around this obstacle by getting the EFSF to finance the next tranche,” the official said. “The only problem is this is on very short notice.”

Euro-zone leaders at their summit last week directed the European Financial Stability Facility to make the next loan payment to Greece of EUR5.8 billion, replacing the bilateral loan system that euro-zone governments set up for Greece in 2010. But the EFSF must raise money on financial markets before it can make these loans. That could be difficult by mid-September, particularly during August when most of Europe is on vacation.

Complicating matters is the apparent need for several national parliaments to back new rules for the EFSF before the fund can lend to Greece. For the Netherlands and Finland in particular, this step will require the euro-zone and Greece’s private-sector creditors to agree on the specifics of the bond exchange proposed by the Institute of International Finance, the global association representing financial institutions in the Greek talks.

The stunning inability of the Euro-elite to come up with a plan to solve the economic woes of even the smallest periphery nations has seeded the doubt for the larger economies. As the WSJ reported over the weekend that doubt has now moved to the core.

Is the euro-zone apple rotten to the core?

Greece, Ireland and Portugal are on bailout lifelines. Cyprus, significantly exposed to Greece through its banks and hit by economic and political turmoil, may be next. Spain has called early elections as it battles with its budget deficit and, along with Italy, is under the market microscope. Repeated emergency summits and pledges to protect the euro have fallen flat.

Cracks may now be emerging at the heart of the euro zone as government bond markets distinguish between French and German debt. French 10-year bonds, at 3.22%, now yield 0.68 percentage point more than German securities, far more than the 0.3-0.4 point gap seen for much of the year, and a level that has only been seen in the months following the collapse of Lehman….

But that doesn’t mean there isn’t cause for concern. France has vulnerabilities: Of the six triple-A-rated countries in the euro zone, it has the highest deficit, 7% of gross domestic product in 2010, and the second-highest debt, at 81.7% of GDP

My readers will be aware that I agree with the France prognosis, but most worryingly for the French, the IMF now have a “plan” for them.

The International Monetary Fund warned this week that France might have to take more measures to hit budget targets in 2012-2013. France is vulnerable to slowdowns in Spain and Italy, and its banks are exposed to debt in those countries.

Other problems aren’t directly of its making: the euro-zone crisis and the policy response to it. Each country that becomes affected simply reduces the number of options European government bond investors have, as well as increasing the strain on the strong countries that are on the hook to fund rescues.

I have spoken many times previously about the eventual outcome for imbalanced Euro-nations that take the IMF route.

Telling a country that has large public and private debt, a trade imbalance and no control over its monetary policy to cut spending will have the same effect it has had in every other country in the same situation. It will cause a sharp rise in unemployment and sharp fall in GDP. This will inevitably lead to further falls in government revenue which will make the problem worse not better. As this happens the EU and the IMF will tell the country that it isn’t trying hard enough and tell it to sell public assets and anything else that could actually help it get back on its economic feet and actually be able to pay the money back.

The IMF plan is always the same, you can read a recent piece on Greece to understand the finer details. It seems, however, that Sarkozy is in agreement with the agency now run by his former finance minister and has already set a course for the French economy.

The International Monetary Fund warned France on Wednesday it would miss its 3 percent deficit target for 2013 unless it took further steps to cut medium-term spending, which were needed to safeguard its AAA credit rating.

With France gearing up for presidential elections in April, the Fund backed President Nicolas Sarkozy’s proposal to write balancing the budget into the constitution — a move bitterly opposed by the opposition Socialist Party.

Sarkozy has staked his reputation on cutting France’s deficit from 7.1 percent of GDP last year to the limit of 3 percent under the euro zone’s Stability and Growth Pact by 2013.

In its annual review of France’s economy, the Fund said it expected growth and tax revenues to miss government projections. It forecast France’s deficit would decline from 5.7 percent of GDP this year to 4.8 percent by 2012 but not fall below 3.8 percent by the end of 2013.

“Under staff’s current projections, achieving the deficit target of 3 percent of GDP by 2013 requires further measures,” the report said.

With tax rates already amongst the highest in Europe, France’s only option was for the government to reduce its spending to meet its fiscal targets, the IMF said, particularly in areas such as pensions and healthcare.

Pecresse said that, if needed, the government stood ready to make further reductions in tax exemptions to meet its fiscal targets.

“The deficit reduction target is sacrosanct. France has to have a deficit of 3 percent in 2013,” she said.

The French government can promise whatever it wants but this is simple economics. A reduction of government spending in an economy highly reliant on debt and with a negative trade balance will deliver the exact opposite of what the IMF promises, as it did for Greece.

With concern over contagion sending shock-waves through the euro zone, President Nicolas Sarkozy played a decisive role in securing a deal last week on a second Greek bailout.

France has the highest deficit, debt and primary deficit — which excludes interest payments — among the AAA-rated euro zone countries.

Under its baseline scenario, the IMF said France’s debt would peak at 88 percent of GDP in 2013, but it warned that it could climb as high as 95 percent of GDP if interest rates were higher than expected and economic growth slower.

The government forecasts that debt will peak at 86.9 percent of GDP in 2012.

The Fund said the constitutional reform being debated by parliament would “help to unequivocally signal the authorities’ commitment to the adjustment path”.

It also called for France to instigate a multi-year budget plan based on independent economic forecasts and urged deeper reform of the pensions and healthcare system to secure long-term fiscal sustainability.

Obviously that report is ignoring private sector debt, which if included takes France’s total debt well over 100% of GDP and actually far worse than that of Greece. 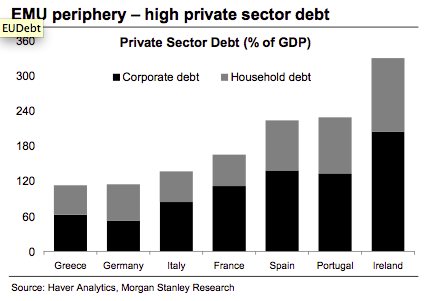 As I stated in a previous post on France:

A quick glance at French fundamentals tells you they are in the same position as the Portugal, Italy, Greece and Spain. High debt in both the public and private sectors, trade imbalance that continues to grow and a current account that has been in the red for years.

As France has a much larger economy than the periphery I can only assume that people thought that it is somehow immune to the same problems. But any nation in this situation that decides to address debt before addressing productivity is committing economic suicide. France, like so many nations before it, is now reaching for the same discarded revolver that Greece has already discharged into it’s own head.

It is only a matter of time before the next “European Crisis”.