Prime Minister John Key has slammed bureaucratic pin-pricking over the proposed New Zealand financial services hub as “absolute rubbish” and stepped in to put the project on the fast-track.

One day Mr Key may  have cause to regret getting what he slammed for.

Alas, from the MSM follow up to my last post on Antipodean scammery, one sees that Mr Key’s pet project was coming off the rails even before he gave it that noisy push. It turns out that some libertarian religious types in the US are already nursing burnt fingers from a New Zealand financial company’s affinity fraud/Ponzi; not a good start. No atheist pinko demurral in the comments please: you might be next, and the scams cost you too, even if you don’t think you’re a victim.

The NC story observed that dubious companies with Panamanian connections were setting up as financial operations in New Zealand. New Zealand’s National Business Review (NBR)  has done its own extra digging this week, and trumped me, a stroke I shall repay here, in the spirit of friendly competition. Some of you curious NZ types may feel that it’s worth shelling out NZD89 for a six month peek at the NBR’s online output, just on the off chance that this gets to be a Big Story. I have no pecuniary interest to disclose…

So here is a summary of NBR’s articles about dodgy Panamanian companies this week. The journalists covering the story there are Niko Kloeten and Colin Willscroft.

NBR/Kloeten tells us that NZ’s Financial Markets Authority has been shaken from its slumbers (by the NBR, is my guess…) and is investigating the Panamanian connection.

NBR/Kloeten enlarge the network of scam companies that I plucked at last week, and finds a $21Mn Ponzi associated with one of them (First Capital Savings and Loan), a religion-based scam going to trial in the US. So don’t kid yourself that this is an overseas story, US readers. Now that the mortgage bubble has died, there are a lot of underemployed crooks in the US who need a new way to rip you off. Evidently some of them have found New Zealand to be an attractive new location for scams aimed at the US.

Third, Colin Willscroft of the NBR reports that questions have been asked in the NZ parliament about the government’s view of the legitimacy of the companies flagged up by Niko Kloeten’s article and the NC piece. There is some traction!

Lastly, and this is my “in”, Kloeten spots a curiosity: auto mechanics and Elvis-impersonating taxi drivers in rundown New Zealand suburbs appear to lead a double life, for they also direct international investment banking operations from their reportedly modest abodes. Hat tips to roy_baldman and Antipodean Sleuth 5 for serving me up major components of that story via their own enquiries.

So what is going on here? Perhaps there really are no social barriers to that sort of career trajectory in NZ: car mechanic one minute, international banker the next. Hardened NC readers will naturally pine for evidence of the reverse path, or make the rejoinder that auto mechanics and taxi drivers could hardly perform worse, as captains of finance, than stony-eyed bunglers such as Stan O’Neal, Jimmy Cayne,  Dick Fuld, or “Sir” Fred Goodwin.

Fair point, but it’s still odd, this, isn’t it? It gets odder when one realises how thin this newly-discovered banking talent is stretched, for each of these unassuming entrepreneurs directs more than 30 other companies as well.

With truly bankerly discretion, the taxi-driver and the auto mechanic clammed up, when doorstepped, but in the last of the NBR pieces I mentioned above (quoted with permission), another interviewee had this to say:

“We basically administered the set-up of the company at the beginning and then the company was on-sold. I don’t know who it was sold to.”

He said Investment Suisse is “basically an FSP shelf company.”

These sorts of companies “set up in New Zealand because our company law allows it,” he said.

“I originally got involved because I have a friend who is connected with the parent company and he assured me it was all legit and fine.”

However, he didn’t know who it was sold to: “Since it’s sold it’s out of my hands.”

So that’s how it works.

For crooks, it’s worth paying people who have time on their hands, and a slight cash shortage, to set up and administer shelf companies. Once it’s set up, by someone legit, with a passport and address and a face and all, you take control from them, by agreement, and appoint your own shadowy overseas directors, anonymous shareholders, or whatever, and your scam shelf company is ready to roll.

This end-runs any identity checking imposed at company inception time. Meanwhile, to your down-at-heel legit person, it just looks like another work-from-home data entry job, earning a welcome few extra bucks out of hours. Until the NBR knock at the door, anyway.

Thanks to the New Zealand Ministry of Economic Development’s miserably porous authentication of company register updaters, which they might have had a better chance to get right, if slamming Prime Minister John Key had kept his ears open and his mouth shut, it is very easy for the legitimate person who starts the company to hand it over to the bad guy, and voila, you have a production line of untraceable dodgy companies. Do what you will with the pipeline’s output – launder money, dodge tax, rip off disorganised religionists. Whatever you like. No-one has a clue who you are any more.

Such is New Zealand’s gift to the world of finance (well, not just New Zealand’s, but that’s for another time).

It is a wild variation of Gogol’s “Dead Souls”, which related how the paper identities of dead serfs were bought up by a sharp eyed scammer, with the intention of turning them into security for a dodgy loan. But the scammer’s plan was busted. Except that this isn’t 19th century Russian satirical fantasy, it is 2011 in New Zealand, and it’s really happening, and it’s not been busted.

All of which leads to another glimmer of inspiration. Since this has to look like a work from home scheme, it will be advertised as such, in NZ. And as it happens, we have also a dodgy looking company register updater, Rod Alvar, or Rodrigo Edgardo ALVARADO, whom we found in our last post flitting between Sweden and Panama, with his long name, and skulking somewhere in New Zealand (supposedly), with his short name, when he updates NZ company registers; a veritable Pooka McPhelimy of dodgy international companies, and about as likely to have a physical existence.

At this point yet another of my informants, a Mr Wire Fence-Wales, starts to feel lucky, and shoves “Rod Alvar” into NZ’s bit of www.adpost.com, web small ads. And lo 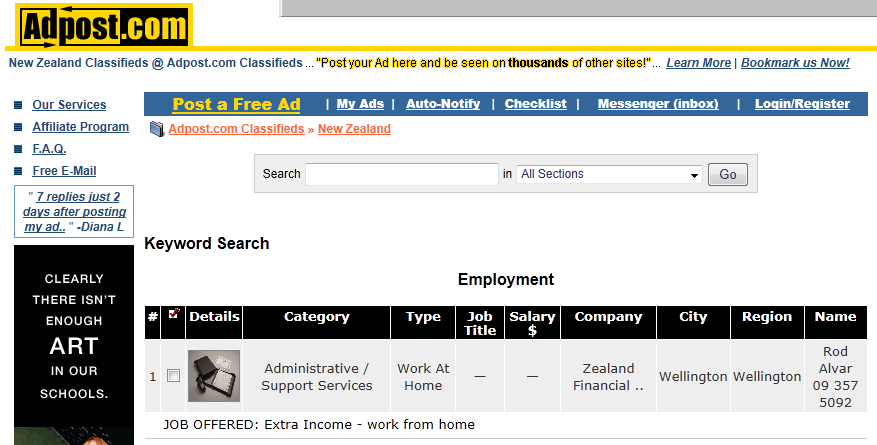 So we have a hypothesis confirmed in one hit, for once, and another lead on the elusive Rod Alvar, and it takes us to  Zealand Financial (not a name that a local would pick, IMO; I think it is always New Zealand, but Kiwis out there are welcome to enlighten me if I am wrong).

Zealand Financial is your one stop shop for dodgy finance-related NZ companies. It blandly offers:

You can acquire an existing Company which has already been registered as Financial Service Provider (FSP) and as member of the Government Reserve Scheme (Dispute Resolution Scheme) and thus authorized to offer services to retail customers without restrictions. Turn key packages can include NexorOne® Online Banking System, Debit Card Issuing and Banclear payment processing facilities among other features.

…so you can get your dubious quasi-bank going, at one fell swoop, if you wish, and

A New Zealand Financial Service Provider (FSP) can offer banking services to any type of client of any nationality and resident in any country. The legal requirements vary depending on whether services are offered to New Zealand residents and depending on the types of customers served. Our online FSP Guide makes it easy for you to identify the requirements applicable to your specific FSP operation.

…which looks ripe for abuse by tax-dodgers, moneylaunderers and fraudsters (but that does seem to be the entire point of this regulatory loophole, Mr Key), and

You can form a new Company with the name of your choice and use this Company to join the Government Reserve Scheme and to register as an FSP. The process from start to completion will typically take 3-5 weeks. Membership in the Reserve Scheme is only required for FSPs offering services to retail customers. We offer complete formation and registration packages suitable for any FSP scenario.

That is the glossy end of the work from home scheme, right there on the web site. That is how you have, first, Elvis impersonators running banks, and then, invisible Panamanians running banks.

To fend off as best I can the unsophisticated “free markets” types who invariably chime in at this point about the miracles of deregulation, and wish to defend companies like Zealand Financial, or parts of what it does, anyway, I should point out that an enquiry to New Zealand’s whois about Zealand Financial gives a strangely familiar address:

…none other than the office address of Auckland Compliance,  one of the companies under investigation by the FMA, and the former office address of First Capital Savings & Loan, which is the bust American Ponzi I mentioned earlier. So I would simply say that Zealand Financial is startlingly close to some of the companies that, via the Rod Alvar connection, one knows that it serves, and incredibly unlucky to have somehow inherited the office suite that recently hosted a $21Mn US fraud. And the versatile and flighty Rod Alvar has yet another hat, but still, most likely, no certain location or identity.

So there we are: the laws and regs, political climate, IT infrastructure and business activities of New Zealand all combine, in this one little spot, to facilitate tax-dodging and money laundering and fraud. Scam Central.

Now, only hopeless sentimentalists and downright fools get worked up enough about Ponzis and other such frauds to go after them; the obstinate deludedness of the victims is pretty soul-destroying, as is all the collateral damage on families and friendships, and the inertia-is-better-than-prevention apathy of law enforcement agencies, who insist on ignoring reports of fraudulent activity until “a crime has been committed”. And if if the victims are would-be tax dodgers, or other crooks, no one minds very much about that either.

But the worst of this nonchalance about New Zealand’s registers and financial regulation is the potential it offers for New Zealand to be transformed into a full-on tax-dodging and money-laundering centre.  Then it won’t be Elvis impersonators or invisible Panamanians that one worries about, it will be the Mob.

What, exactly, is John Key’s aspiration for New Zealand, again? Does he want it to be a Financial Hub, or Panama, or is it to be Sicily?