Yves here. I thought this discussion of Baumol’s disease would be of interest to NC readers because the issues are relevant for advanced economies generally, not just Australia.

By Cameron Murray, aka Rumplestatskin, a professional economist with a background in property development, environmental economics research and economic regulation. Cross posted from MacroBusiness

Why does the wage of a musician in a string quartet rise over time at roughly the same pace as wages in other areas of the economy, despite the lack of productivity gains in the performance of music?

William J Baumol solved this riddle in the 1960s. His insight, known as Baumol’s cost disease, is fundamental to understanding changes in the economy over time. If we are going to debate the shift towards a service economy, productivity, unemployment, health and education costs and government intervention in markets, we need to fully appreciate his insight. Unfortunately you won’t find his ideas in many introductory economics textbooks.

Baumol’s disease can be explained simply. Only some areas of production will see strong improvements in labour productivity, typically through the substitution of capital for labour (such as in manufacturing and agriculture). Workers in these industries use their bargaining power to capture part of the increased profitability arising from productivity gains in their wages.

This means the cost of labour intensive services with low productivity growth will increase relative to other goods and services in the economy over time. In addition, the amount of labour employed will shift towards service sectors with low productivity growth. Ever wondered why all developed countries seem to have relatively large service sectors? This is part of the story (the other part is displacement of tradable industries to cheaper locations).

Baumol’s original article and subsequent works highlighted the importance of his cost disease to the provision of fundamental health and education services. The crux of his argument follows from key the finding that increases in the cost of providing these fundamental services in the economy are unavoidable (the disease has no cure). Therefore tough decisions need to be made about whether these services are provided through an expansion of government provision, and the increasing share of the economy the government will necessarily have to take, or whether these social services can be provided through private enterprise, and the associated problems of gaming and moral hazard this may entail.

We can expand on these points to explore the relevance of Baumol’s observation to contemporary political debates.

One key area of public debate is the decline in manufacturing and the apparent loss of productive industries where workers ‘actually make something’. While clearly one fundamental driver of this change is the shift of manufacturing offshore, another key reason is that the economy simply needs fewer workers in these areas because each worker is becoming more productive.

The recurring debate about the rise in public healthcare costs also needs to catch Baumol’s disease. To make any progress in the provision of health care all sides of politics need to acknowledge that the cost of health care MUST rise over time relative to other goods and services if the economy is experiencing any form of productivity growth (noting the current temporary decline in productivity growth in Australia). Budgeting for this cost growth in health care over time is absolutely necessary, particularly in light of the demographic shifts occurring.

Education is the other area where governments need to acknowledge that cost escalation is unavoidable. While I don’t want to give governments an excuse to waste money operating schools inefficiently, but there are limits to productivity growth in this area. Teachers will still teach classes of roughly the same size, irrespective of the computing and associated technology which supports them.

We can see the long term trends in the graph below. Healthcare, arts and recreation, and professional services have increased their share of the labour force substantially over the past 27 years. Meanwhile, areas of the economy where productivity growth is high, such as agriculture, manufacturing, wholesale trade, and utilities, have required a much smaller proportion of the workforce over this period. Of course Baumol’s disease describes long term trends which act in parallel to patterns of regional displacement of tradable industries to cheaper foreign markets. In the short run many other factors are also at play. 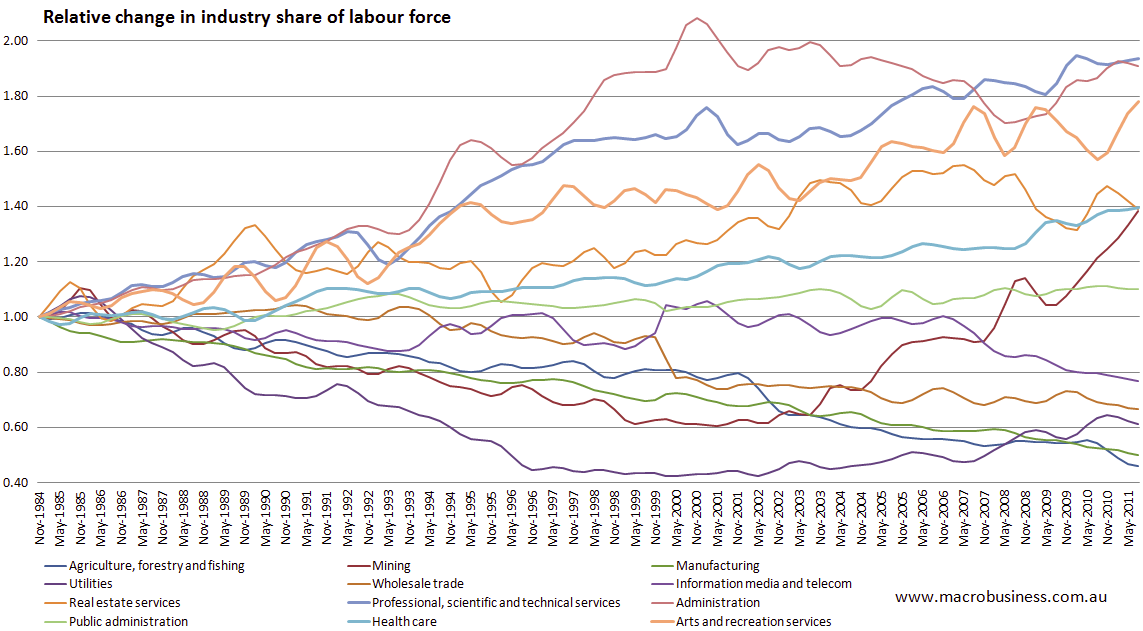 Unfortunately most economists fail to acknowledge Baumol’s disease when analysing changes in the economy. You won’t find a mention of it in the media (just two results when searching Google news), and you will find plenty of confused ideological articles about modern poverty and flatscreen television. How can someone live in poverty with a flatscreen television, a coffee maker and a DVD player? Simple. These goods are becoming relatively cheaper over time, while other fundamental goods and services – health, education, food and housing – are becoming more expensive. In fact, I could buy a flatscreen, a DVD player and a coffee maker for about the cost of four days rent or a week’s groceries for my small family. This is an important consideration in analysis of the changing cost of living.

Sensible economic discussion needs to catch Baumol’s disease. Without it we cannot properly analyse the influence of short term political and financial factors against a backdrop of structural changes in labour markets and prices as a result of productivity growth in some areas of the economy.