We’ve been a bit hard on the left of late, so we figured we’d take some steps to balance our programming. Mark Ames, who has been doggedly on the trail of the Koch brothers, found a delicious failure to live up to his oft-repeated standard of conduct by a god in the libertarian pantheon, Friedrich Hayek. And this fall from grace was encouraged one of the chief promoters of extreme right wing ideas in the US, Charles Koch.

Bear in mind that Charles Koch has not merely promoted libertarian ideas generally but in particular founded the Cato Institute, which has done more than any other single organization to wage war on Social Security. Koch wanted Hayek to come to the US in 1973 to become a “distinguished senior scholar” at the Institute for Human Studies, which Koch quickly made into a libertarian citadel. Hayek initially turned the opportunity down, saying he had just had an operation, which made him particularly aware of the dangers of falling ill abroad. Austria had close to universal health care; Hayek’s comment strongly suggests he took advantage of it.

Per Yasha Levine and Ames in the Nation:

IHS vice president George Pearson (who later became a top Koch Industries executive) responded three weeks later, conceding that it was all but impossible to arrange affordable private medical insurance for Hayek in the United States. However, thanks to research by Yale Brozen, a libertarian economist at the University of Chicago, Pearson happily reported that “social security was passed at the University of Chicago while you [Hayek] were there in 1951. You had an option of being in the program. If you so elected at that time, you may be entitled to coverage now.”

A few weeks later, the institute reported the good news: Professor Hayek had indeed opted into Social Security while he was teaching at Chicago and had paid into the program for ten years. He was eligible for benefits. On August 10, 1973, Koch wrote a letter appealing to Hayek to accept a shorter stay at the IHS, hard-selling Hayek on Social Security’s retirement benefits, which Koch encouraged Hayek to draw on even outside America. 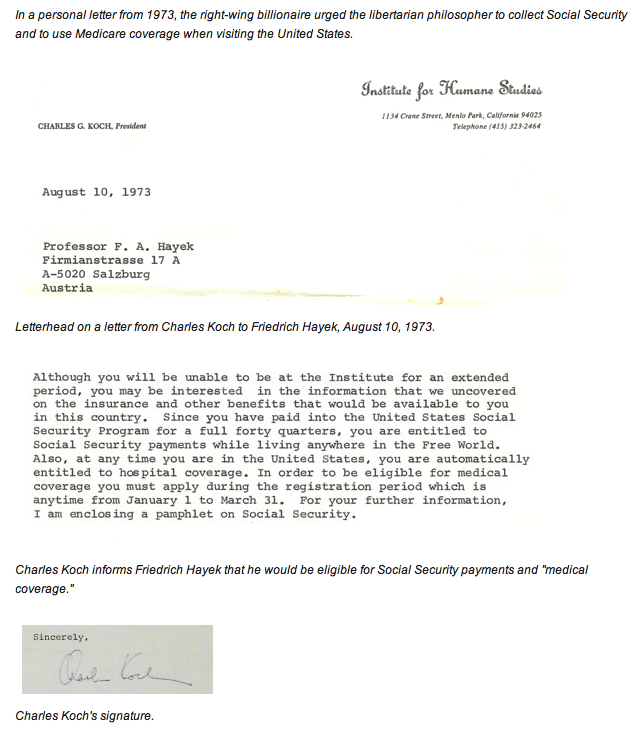 This should put Hayek in some sort of libertariam circle of hell, along with Ayn Rand, who took Medicare and Social Security payments when she was diagnosed with lung cancer.

To quote Blue Texan at FireDogLake:

And before any glibertarians come back with “but…but…she paid into it so there’s no hypocrisy” in comments, Rand herself wrote,

Adding an extra layer of crow to the deliciousness, the Ayn Rand Center for the Center for F*ck You I Got Mine Individual Rights has an article on its website right now titled, “Social Security is Immoral“.