The IMF has a passel of articles up on income inequality. “Unequal = Indebted,” by Michael Kumhof and Romain Rancière, focused on macroeconomic effects.

It stars with the observation that countries showing a significant increase of income inequality (defined as the share going to the top 5%) have deteriorating current accounts (note these are all advanced economies; they discuss the glaring exception of China later in the article). 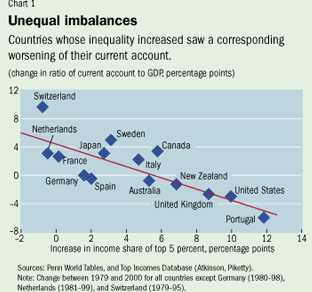 Economists being economists, they have to construct a model to see whether what works in fact also works in theory. In the model, the top 5% has an increase in its bargaining power over 10 years. Even though they like to consume, consuming (as John Kenneth Galbraith) is work, and they also derive satisfaction from investing, which includes lending more to the great unwashed 95%. And since the bottom group isn’t getting as much of the income pie as it once did, it is receptive to the idea of borrowing more. We know how this movie progresses: the bottom group accumulates more debt, and over time, the risk premium to them rises.

In an open economy, the task of financing the bottom group’s borrowing demand following a negative income shock is shared between the domestic top group and foreigners. This enables the top group to deploy more of its higher income in domestic plant and machinery investment and consumption than would be possible in a closed economy. But externally the result is a deterioration of the current account, which peaks at more than 1 percent of GDP.

In reality, increases in income inequality are often followed by political interventions to prop up the living standards of the bottom group, whose real income is stagnating. This is generally done not by directly confronting the sources of inequality, such as declines in the collective bargaining power of the bottom group or shifts in the tax burden from the top group to the bottom group, but rather by promoting policies that cut the cost of borrowing for both individuals and financial institutions (Rajan, 2010). These policies include domestic and international financial liberalization, and they put additional downward pressure on current accounts.

The authors added the impact of financial liberalization to their model: 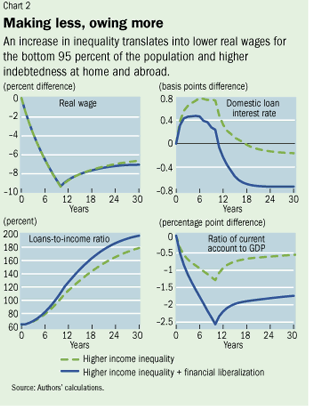 So what are the results of liberalization? More of the high income cohort’s funds go into financial assets at the expense of real assets. The bottom group gets to consume more, but the affluent invest less in productive capacity, which leads to lower real income of the bottom 95% and further deterioration in the current account.

And why is China different? China has immature financial markets, so the poor and middle class can’t readily borrow from the rich. The inability to use lending to shore up consumption leads to an export-oriented model, with the result that the savings in the economy are, to a fair degree, deployed overseas.

Note that in this sceanrio, more mature financial markets at home are no remedy:

But if lending is liberalized without addressing the underlying income inequalities, the result would simply be an increase in indebtedness within surplus countries (between the rich and the rest of the population), rather than vis-à-vis the rest of the world. In other words, there would be a globalized rather than a regional increase in domestic indebtedness of the poor and middle class. While this would reduce cross-border financial imbalances, it would exacerbate domestic debt-to-income ratios and thus vulnerability to crises. In the long run, there is therefore simply no way to avoid addressing the income inequality problem head-on. Financial liberalization in surplus countries buys time, but at the expense of an eventually much larger debt problem.

Kumhof and Ranciere give a very brief treatment of possible solutions. The don’t seem too keen about taxing capital more and labor less, since capital can flee. They prefer more progressive taxation of labor income (but that leaves the problem of income from capital unremedied). They seem to regard direct efforts to improve the bargaining power of labor as most effective but conceding they are the most difficult reform to implement. They nevertheless arguie that the costs of the failure to reverse course are too high to ignore.