Naked mole rat genome may point way to long, healthy life Washington Post (hat tip reader furzy mouse). Yes, but I saw Fast, Cheap, and Out of Control. They have hive minds too. Just undereat and lift weights big time. One of my past endocrinologists was an anti-aging guy (he eventually turned his entire practice over to anti aging, which is why I quit seeing him). He went to an anti-aging conference and one of the presenters gave a list of 20 biomarkers, stuff like resting pulse, lung capacity, blood pressure, insulin sensitivity, body mass index, body fat %, cholesterol, cortisol (stress hormone). They were asked if they could rely on only one measure, which was the best predictor of biological, as opposed to chronological, age.

Rabbit-Hole Economics Paul Krugman, New York Times. Yours truly saw most of the debate (I normally studiously avoid such exercises in torture) and indeed felt like I had entered an alternative reality.

Did Fannie Cause the Disaster? Jeff Madrick and Frank Partnoy, New York Review of Books

Mortgage Servicing – Examination Procedures Consumer Financial Protection Bureau. Ooh, this is going to turn the servicing industry upside down. The CFPB is going to look at whether services have been complying with laws they have heretofore been ignoring.

Antidote du jour. Our Richard Smith just got a pair of new kittens in the last month, brother and sister, and one got away. Ironically he escaped when Richard was coming back from the pet suppliers with a name tagged collar. But his enterprising wife recruited some street kids, and they found the kitten (provisionally named Fisher). He was rather pleased and effusive after returning from his adventure, which probably means he’ll be keen to try it again. 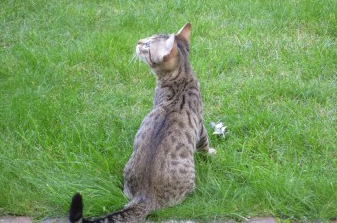