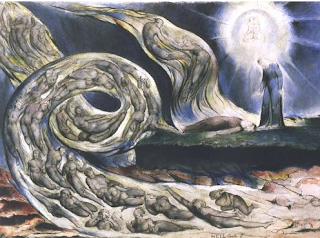 The infernal hurricane that never rests
Hurtles the spirits onward in its rapine;
Whirling them round, and smiting, it molests them.

Every now and then a terrible thought enters my mind. It runs like this: what if the theatre of the Eurocrisis is really and truly a political power-game being cynically played by politicians from the core while the periphery burns?

Yes, of course, we can engage in polemic and say that such is the case. But in doing so we are trying to stoke emotion and generally allowing our rhetorical flourish to carry the argument. At least, that is what I thought. I had heard this rhetoric; I had engaged in it to some extent myself; but I had never really believed it. Only once or twice, in my nightmares, I had thought that, maybe, just maybe, it might have some truth.

And then the Financial Times published this ‘strictly confidential’ document leaked to them from within the Eurostructure. That is when my nightmare started becoming increasingly real.

The document is damning in that it fully recognises what many of us have been saying for months: namely, that the austerity measures in the periphery are not going to produce an outcome favourable to anyone. The document focuses on Greece, but the implications of what it reports regarding the experiment currently taking place there have implications for all the countries currently looking down the barrel of austerity.

Take growth rates, for example. Before this document emerged the Troika’s estimates were fairly robust. It was assumed that if the profligates swallowed their austerity medicine they would soon be back on the road to recovery. Not so anymore. In the leaked document Greece’s economy is expected to contract 5.5% in 2011 and a further 3% in 2012. In 2013 it assumes Greece will start growing again – by a meagre 1.25%. She will go on to grow a further 2.66% from 2015-2020. For the decade after that – between 2021 and 2030 – growth is expected to be a measly 1.66%.

These projections are actually overly optimistic. They assume that structural reforms will actually promote growth while, in reality, they will probably exacerbate deflationary pressures. But even if we take these figures at face value the message is clear: Greece is going to be in the toilet for the next twenty years if the current policies are adhered to.

The report goes on to suggest that proceeds from the privatisation drive (read: asset-stripping) will be much lower than anticipated. It also suggests that Greek access to normal channels of market-based financing will be greatly delayed and that government surpluses in the coming years will be below target. (Again, on this latter point the report is probably being far too optimistic in its assessment).

The conclusions the report draws from this are stark:

Under these assumptions, Greece’s debt peaks at very high levels and would decline at a very slow rate, pointing to the need for further debt relief to ensure sustainability.

Oh dear. That doesn’t sound good at all. Under these assumptions (again, overly optimistic, in my view) Greece would not return to the markets until 2021!

The report then goes on to discuss private sector haircuts of anywhere up to 60%. Ouch!

Here is the key point though: the report essentially states that the current austerity measures are going to butcher the Greek economy. Even if haircuts are taken – and even if these work in bringing down the debt load, which is a big ‘if’ – the Greek economy is assumed to be in for two decades of sluggish growth. (Once again, I’ll point out that, as far as I can see, even this pessimistic report remains too optimistic in this regard).

That leads to the obvious question: do the Eurocrats know all this? Before it was always implicitly assumed that they did not. It was assumed that they were simply deluded about economic recovery in the periphery; not bloody-minded about the implications of austerity. But now we have to question this narrative.

Hence, my nightmare becomes ever more real. What this report suggests is that the Eurocrats know well what they are doing. They are imposing destructive austerity measures – and, let us be frank, pointless asset-stripping drives – on the periphery knowing full well what effect these are going to have.

So, why are they doing this? Well, in light of current evidence we should raise the unpleasant question: is there not the chance that this is really a cynical power-grab? The elites in the core countries have found their political status boosted immeasurably by the present crisis. They will moan that this crisis is awful, of course, but secretly they must know that it is upping their political profile immeasurably and putting them in important decision-making positions.

And so, what if we are moving into a situation where the Eurocrats establish an iron-grip on the periphery through financing arrangements that essentially allow them full control over the imposition of highly destructive economic policies?

Here’s how I see this nightmare scenario unfolding:

Firstly, it is becoming increasingly recognised – most notably by the French and the IMF – that, in order for the Eurozone financial system to regain a modicum of stability, the ECB must step in and back the EFSF. In essence, the ECB must become a sort of unofficial ‘Lender of Last Resort’. If this situation comes about, the Eurocrats will have the ‘unlimited firepower’ – that is, the ECB’s ability to issue currency – with which they can essentially control the bond markets.

If the Eurocrats find themselves in this position they may well opt to keep the periphery bond markets on life support while continuing to insist on austerity… all the while, fully acknowledging – as laid out above in the secret document – what this austerity will mean in real terms: perpetual and unending suffering in the periphery.

Thus the Eurocrisis will be a financial crisis no more. Instead what we will have is the core countries tightening the vice of austerity on the imploding periphery. As can clearly be seen from the projections in the document discussed above, there will be no endgame here and this situation will carry on indefinitely. The periphery will find themselves caught up in a Dantean hell, not unlike the one portrayed by the great Irish writer Flann O’ Brien in his book The Third Policeman:

He said it was again the beginning of the unfinished, the rediscovery of the familiar, the re-experience of the already suffered, the fresh-forgetting of the unremembered. Hell goes round and round. In shape it is circular and by nature it is interminable, repetitive and very nearly unbearable.

The breaking point will then have to be both political and local. Somewhere in the periphery the population will eventually have enough of this perverse spiral and some sort of political event will break the destructive cycle.

Sounds good, right? Well, maybe not. Let us assume that the breaking point occurs in Greece, which it probably will as Greece is already beginning to look ungovernable. Well, Greece has an interesting political history in this regard. On the one hand, Greece has a history of radicalism – remember, the country almost had a Communist revolution after WWI. But – as is so often the case in countries with a strong radical tradition – Greece also has a tendency toward authoritarian rule, having spent years under a military dictatorship.

Given these dynamics it is not unlikely that the impetus for shrugging off the yoke comes from the hard left. With the soft left already in power and sending the country to hell in a hand basket, the far left will probably look increasingly attractive to the average Greek citizen.

But what if these far left stirrings then, as they so often have in history, summon into being the demonic forces of authoritarianism that ruled over Greece not so long ago? Then we could be looking at something like a military coup d’etat and a new military-backed dictatorship.

This is all speculation, of course, and should be taken as such. But the document leaked from within the structures of Europower strongly suggests that the Eurocrats know exactly what they are imposing on the periphery. This further indicates that, come hell or high water, they are going to stick to their guns regarding austerity. Assuming that this state of affairs is not going to last for two decades or more, the game-change is then sure to come from within the periphery countries.

Last time we saw such austerity policies being forcibly imposed on a country within Europe – I refer, of course, to the debt extractions that took place after WWI – we got Hitler. Greece, of course, is far too small a country to produce a Hitler. But that is not to say that it could not produce something a little smaller, but for that, no less dangerous to the Greek people. A Pinochet, for example. What we might be seeing gathering around certain peripheral countries right now is nothing less than forces that might threaten their democracies.

The Eurocrats, who can now be assumed to be very much ‘in the know’ with regards austerity and where it will lead, had better wake up and smell the coffee. For this nightmare is becoming increasingly real by the day.