By David Llewellyn-Smith, the founding publisher and former editor-in-chief of The Diplomat magazine, now the Asia Pacific’s leading geo-politics website. He is also the co-author of The Great Crash of 2008 with Ross Garnaut. Cross posted from MacroBusiness

So, global PMIs for November have passed. Where do they suggest that the global economy is heading? Let’s begin with the good news, the US of A. The combined ISM Manufacturing and Services Indexes are below: 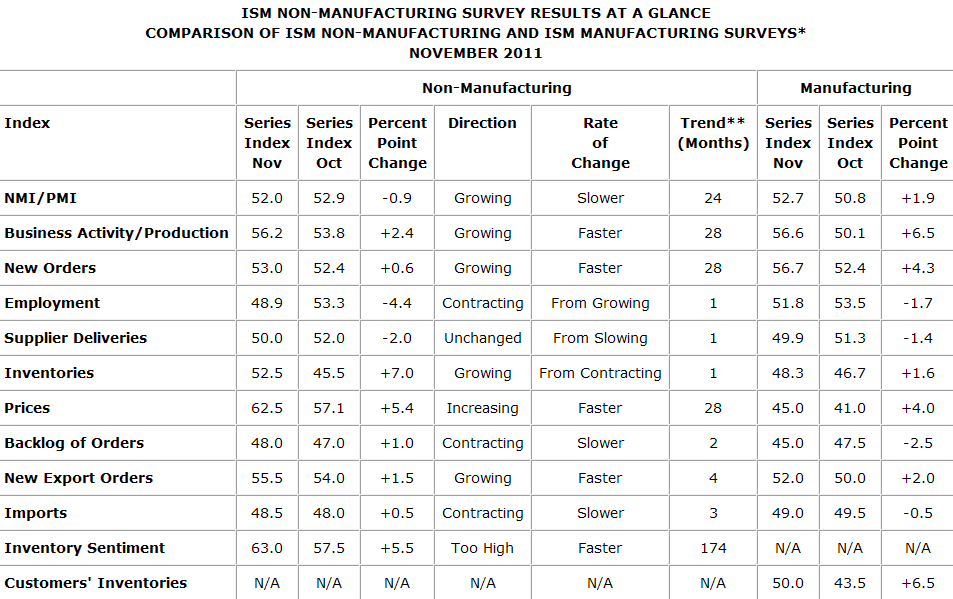 The headline figure for manufacturing lifted modestly and it contracted modestly for services. New orders improved for both but so too did inventories. Less promising is that employment for manufacturing collapsed into contraction and services went close as well. Clearly, US businesses are not confident enough about the current bounce to hire into it.

So much for the good news. Let’s cross the Pacific to North Asia where we find China really struggling. We already know about the plunge of the manufacturing PMI from 51 to 47.7 last week. Yesterday we added the Services PMI which recorded a moderate fall from 54.2 to 52.5, still expanding. But the composit PMI that combines the two give you an idea of the current trajectory of the Chinese economy: 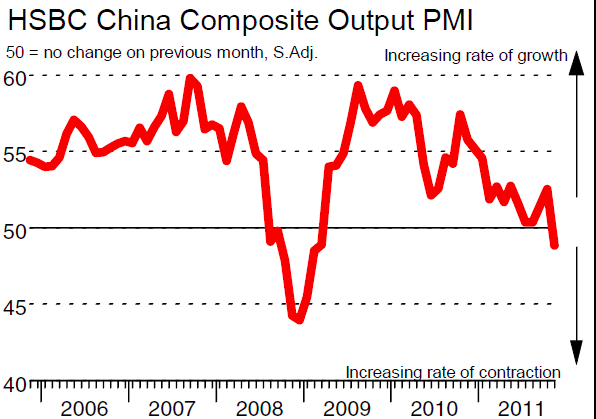 That’s 48.9, down from 52.6. Chinese business is not enjoying itself just now. Although, the sub-component employment indexes showed that maufacturing is not yet shedding jobs although the jumping inventory ratios suggest they will shortly, and services are expanding the fastest since June. Authorities have begun to ease the foot off the break but so far, minimally and if we are to take them at their word, it will be a slow easing.

This China slowdown has hit the rest of Asia hard with manufacturing contracting in Japan, Korea and Taiwan. All three reported flat employment indexes.

Swinging to Europe, we know that maufacturing is contracting fast, down from 47.1 in October to 46.4 in November. The employment sub-index reported active job losses as busiensses became more cautious. Last night we added the services PMI and the result was a weak 47.5, slightly up from 46.4 in October. 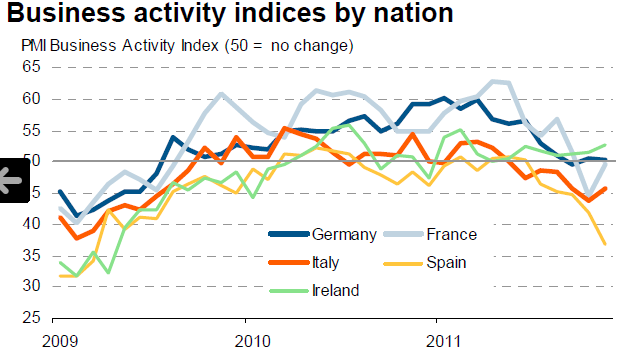 The core nations of Germany and France added jobs whilst Ireland, Spain and most dramtically Italy shedded jobs. The composit PMI for the Eurozone now looks like it’s projecting a mild recession: 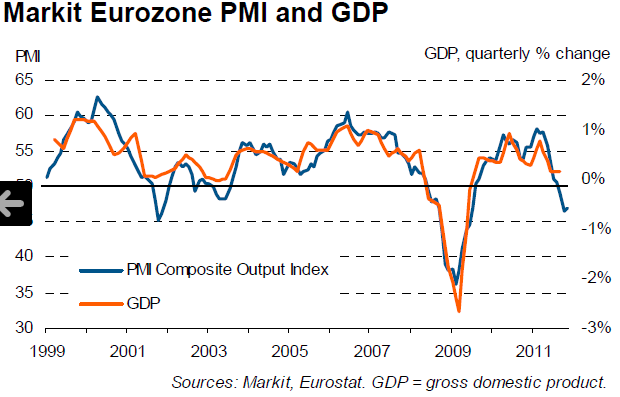 So, where does that leave world growth? First, the global economy for services:

Still expanding at a crappy pace but note the employment index turning negative. Next, the global economy for manufacturing:

Activity contracting with the employment index heading that way as well. That all adds up to this insipid growth: 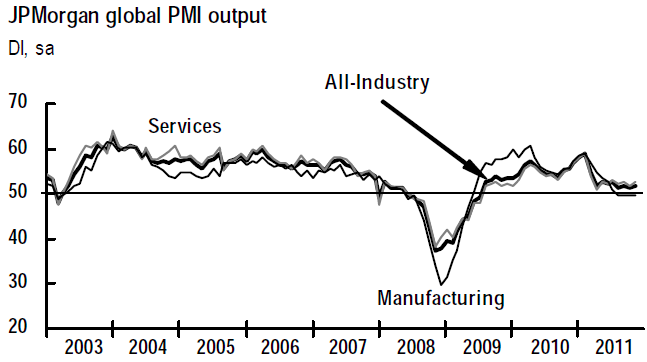 A flatline in global PMIs within which there has been significent churn, with the EZ and China falling and the US rising.

So, what does all of this say about the global business cycle? Firstly, we’d have to say that without the US, global production would be in big trouble. Everywhere else is slowing swiftly. I’d describe where we are as stall speed for the global economy. In my view, it cannot stay here sustainably. Either employment losses will accererate as businesses seek to claw back profits lost to declining demand or the new stimulus that’s being pumped in will turn demand around, lift production and job creation as inventories fall. Unfortunately, the Eurozone is doing the opposite of stimulus: austerity. Likewise, China’s seeming determination to keep a lid on property is preventing any rapid loosening there too. My bet remains, therefore, that we see further slowing from here into next year irrespective of any credit event that would repeat 2008′s dizzying plunge.