Yves here. By happy coincidence, a mere day after Jamie Dimon offered yet another misleading defense of the 1% (among other howlers, claiming that their marginal tax rates were their effective tax rates), the gurus of income inequality, Thomas Piketty and Emmanuel Saez, say there is no good case for coddling the rich. Their analysis shows that top marginal tax rates could rise to near Eisenhower administration levels (the top tax rate then was 91%) and not hurt growth.

The top 1% of US earners now command a far higher share of the country’s income than they did 40 years ago. This column looks at 18 OECD countries and disputes the claim that low taxes on the rich raise productivity and economic growth. It says the optimal top tax rate could be over 80% and no one but the mega rich would lose out.

In the United States, the share of total pre-tax income accruing to the top 1% has more than doubled from less than 10% in the 1970s to over 20% today (CBO 2011 and Piketty and Saez 2003). A similar pattern is true of other English-speaking countries. Contrary to the widely held view, however, globalisation and new technologies are not to blame. Other OECD countries such as those in continental Europe or Japan have seen far less concentration of income among the mega rich (World Top Incomes Database 2011).

At the same time, top income tax rates on upper income earners have declined significantly since the 1970s in many OECD countries, again particularly in English-speaking ones. For example, top marginal income tax rates in the United States or the United Kingdom were above 70% in the 1970s before the Reagan and Thatcher revolutions drastically cut them by 40 percentage points within a decade.

At a time when most OECD countries face large deficits and debt burdens, a crucial public policy question is whether governments should tax high earners more. The potential tax revenue at stake is now very large. For example, doubling the average US individual income tax rate on the top 1% income earners from the current 22.5% level to 45% would increase tax revenue by 2.7% of GDP per year,1 as much as letting all of the Bush tax cuts expire. But, of course, this simple calculation is static and such a large increase in taxes may well affect the economic behaviour of the rich and the income they report pre-tax, the broader economy, and ultimately the tax revenue generated. In recent research (Piketty et al 2011), we analyse this issue both conceptually and empirically using international evidence on top incomes and top tax rates since the 1970s.

First, higher top tax rates may discourage work effort and business creation among the most talented – the so-called supply-side effect. In this scenario, lower top tax rates would lead to more economic activity by the rich and hence more economic growth. If all the correlation of top income shares and top tax rates documented on Figure 1 were due to such supply-side effects, the revenue-maximising top tax rate would be 57%. This would still imply that the United States still has some leeway to increase taxes on the rich, but that the upper limit has already been reached in many European countries.

Third, while standard economic models assume that pay reflects productivity, there are strong reasons to be sceptical, especially at the top of the income distribution where the actual economic contribution of managers working in complex organisations is particularly difficult to measure. In this scenario, top earners might be able to partly set their own pay by bargaining harder or influencing compensation committees. Naturally, the incentives for such ‘rent-seeking’ are much stronger when top tax rates are low. In this scenario, cuts in top tax rates can still increase top income shares – consistent with the observed trend in Figure 1 – but the increases in top 1% incomes now come at the expense of the remaining 99%. In other words, top rate cuts stimulate rent-seeking at the top but not overall economic growth – the key difference with the first, supply-side, scenario.

To tell these various scenarios apart, we need to analyse to what extent top tax rate cuts lead to higher economic growth. Figure 2 shows that there is no correlation between cuts in top tax rates and average annual real GDP-per-capita growth since the 1970s. For example, countries that made large cuts in top tax rates such as the United Kingdom or the United States have not grown significantly faster than countries that did not, such as Germany or Denmark. Hence, a substantial fraction of the response of pre-tax top incomes to top tax rates documented in Figure 1 may be due to increased rent-seeking at the top rather than increased productive effort.

Naturally, cross-country comparisons are bound to be fragile, and the exact results vary with the specification, years, and countries. But by and large, the bottom line is that rich countries have all grown at roughly the same rate over the past 30 years – in spite of huge variations in tax policies. Using our model and mid-range parameter values where the response of top earners to top tax rate cuts is due in part to increased rent-seeking behaviour and in part to increased productive work, we find that the top tax rate could potentially be set as high as 83% – as opposed to 57% in the pure supply-side model.

Up until the 1970s, policymakers and public opinion probably considered – rightly or wrongly – that at the very top of the income ladder, pay increases reflected mostly greed or other socially wasteful activities rather than productive work effort. This is why they were able to set marginal tax rates as high as 80% in the US and the UK. The Reagan/Thatcher revolution has succeeded in making such top tax rate levels unthinkable since then. But after decades of increasing income concentration that has brought about mediocre growth since the 1970s and a Great Recession triggered by financial sector excesses, a rethinking of the Reagan and Thatcher revolutions is perhaps underway. The United Kingdom has increased its top income tax rate from 40% to 50% in 2010 in part to curb top pay excesses. In the United States, the Occupy Wall Street movement and its famous “We are the 99%” slogan also reflects the view that the top 1% may have gained at the expense of the 99%.

In the end, the future of top tax rates depends on the public’s beliefs of whether top pay fairly reflects productivity or whether top pay, rather unfairly, arises from rent-seeking. With higher income concentration, top earners have more economic resources to influence social beliefs (through think tanks and media) and policies (through lobbying), thereby creating some reverse causality between income inequality, perceptions, and policies. We hope economists can shed light on these beliefs with compelling theoretical and empirical analysis. 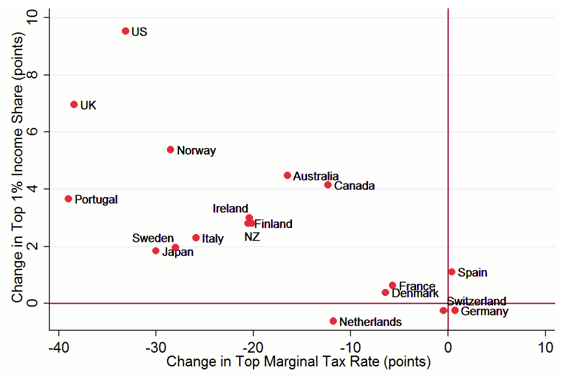 Note: The Figure depicts the change in top 1% pre-tax income shares against the change in top marginal income tax rates from 1975-9 to 2004-8 for 18 OECD countries (top tax rates include both central and local individual income tax rates, exact years vary slightly by countries depending on data availability in the World Top Income Database). Source: Piketty et al (2011), Figure 4A. 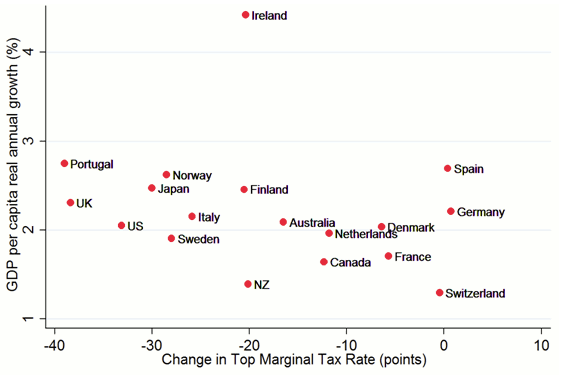 Note: The Figure depicts the average real GDP-per-capita annual growth rate from 1975-9 to 2004-8 against the change in top marginal tax rates from 1975-9 to 2004-(exact years are the same as Figure 1 and vary slightly by countries). The correlation is virtually zero and insignificant suggesting that cuts in top tax rates do not lead to higher economic growth. Source: Piketty et al (2011), Figure 4B.