By Yasha Levine, an editor of The eXiled. You can reach him at levine [at] exiledonline.com.. Cross posted from The eXiled

Yasha Levine was forced to surrender his freedom, as well as his shoe laces…for his own protection

I finally got home Thursday afternoon after spending two nights in jail, and have had a hard time getting my bearings. On top of severe dehydration and sleep deprivation, I’ve got one hell of pounding migraine. So I’ll have to keep this brief for now. But I wanted to write down a few things that I witnessed and heard while locked up by LA’s finest…

First off, don’t believe the PR bullshit. There was nothing peaceful or professional about the LAPD’s attack on Occupy LA–not unless you think that people peacefully protesting against the power of the financial oligarchy deserve to be treated the way I saw Russian cops treating the protesters in Moscow and St. Petersburg who were demonstrating against the oligarchy under Putin and Yeltsin, before we at The eXiled all got tossed out in 2008. Back then, everyone in the West protested and criticized the way the Russian cops brutally snuffed out dissent, myself included. Now I’m in America, at a demonstration, watching exactly the same brutal crackdown… 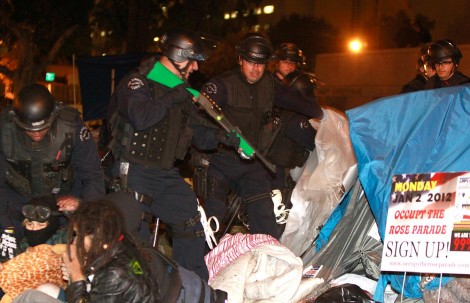 While people are now beginning to learn that the police attack on Occupy LA was much more violent than previously reported, few actually realize that much—if not most—of the abuse happened while the protesters were in police custody, completely outside the range of the press and news media. And the disgraceful truth is that a lot of the abuse was police sadism, pure and simple:

* I heard from two different sources that at least one busload of protesters (around 40 people) was forced to spend seven excruciating hours locked in tiny cages on a Los Angeles County Sheriff’s Dept. prison bus, denied food, water and access to bathroom facilities. Both men and women were forced to urinate in their seats. Meanwhile, the cops in charge of the bus took an extended Starbucks coffee break.

• The bus that I was shoved into didn’t move for at least an hour. The whole time we listened to the screams and crying from a young woman whom the cops locked into a tiny cage at the front of the bus. She was in agony, begging and pleading for one of the policemen to loosen her plastic handcuffs. A police officer sat a couple of feet away the entire time that she screamed–but wouldn’t lift a finger.

• Everyone on my bus felt her pain–literally felt it. That’s because the zip-tie handcuffs they use—like the ones you see on Iraq prisoners in Abu Ghraib—cut off your circulation and wedge deep through your skin, where they can do some serious nerve damage, if that’s the point. And it did seem to be the point. A couple of guys around me were writhing in agony in their hard plastic seats, hands handcuffed behind their back.

• The 100 protesters in my detainee group were kept handcuffed with their hands behind their backs for 7 hours, denied food and water and forced to sit/sleep on a concrete floor. Some were so tired they passed out face down on the cold and dirty concrete, hands tied behind their back. As a result of the tight cuffs, I wound up losing sensation in my left palm/thumb and still haven’t recovered it now, a day and a half after they finally took them off.

• One seriously injured protester, who had been shot with a shotgun beanbag round and had an oozing bloody welt the size of a grapefruit just above his elbow, was denied medical attention for five hours. Another young guy, who complained that he thought his arm had been broken, was not given medical attention for at least as long. Instead, he spent the entire pre-booking procedure handcuffed to a wall, completely spaced out and staring blankly into space like he was in shock.

• An Occupy LA demonstrator in his 50s who was in my cell block in the Los Angeles Metropolitan Detention Center told us all about when a police officer forced him to take a shit with his hands handcuffed behind his back, which made pulling down his pants and sitting down on the toilet extremely difficult and awkward. And he had to do this in sight of female police officers, all of which made him feel extremely ashamed, to say the least.

• There were two vegetarians and one vegan in my cell. When I left jail around 1:30 pm, they still had not been given food, despite the fact that they were constantly being promised that it would come.

• There were 292 people arrested at Occupy LA. About 75 of them have been released or have gotten out on bail, according the National Lawyers Guild. Most are still inside, slapped with $5,000 to $10,000 bail. According to a bail bondsman I know, this is unprecedented. Misdemeanors are almost always released on their own recognizance, which means that they don’t pay any bail at all. Or at most it’s a $100.

• That means the harsh, long detentions are meant to be are a purely punitive measure against Occupy LA protesters–an order that had to come from the very top.