The usual stereotype of corruption on the US state level is that, depending on the day, Louisiana or Mississippi tops the list. But the cesspool created by the widening foreclosure crisis in Florida puts anything in kudzu-land to shame.

The object lesson is a statement issued by the Florida Office of the Inspector General concerning its decision not to investigate the firing (or more accurately, resignation under duress) of two lawyers in the attorneys general’s office, June Clarkson and Theresa Edwards, who believe they were canned for political reasons, namely, for being too aggressive in investigating foreclosure abuses. Note that these firings came shortly after they received exemplary performance reviews.

Now narrowly, there may indeed be nothing to investigate relative to their firing, in that workers in the US have pretty close to zero rights and a boss can indeed fire someone simply for not sharing his sense of priories. But there is a more general question of public interest as to whether a firing in a public office was indeed politically motivated, particularly if the investigators were ruffling the feathers of parties that the AG did not want to annoy (and as the brief one page conclusion notes, Florida does have statutes against “misuse of a public position” but query how that is interpreted in practice).

As we will discuss further, this astonishingly shoddy document tries to bury the matter by publishing write-ups of long complaints by the parties immediately involved in the firing (Associate AG Richard Lawson, Assistant AGs Trish Conners and Carlos Muniz) and by one of the parties targeted, namely, a letter from Lender Processing Services. Regular readers of this blog will know LPS is engaged in questionable conduct and has been the subject of investigations by the US Trustee’s office, a branch of the Department of Justice. It is currently the target of a wide-ranging lawsuit by the Nevada State attorney general Catherine Cortez Masto, an investigation by the FDIC, has signed a consent decree with the OCC for questionable conduct, and is subject of private lawsuits, including one joined by the Chapter 13 trustees as a class, for impermissible legal fee sharing. (We’ve also described how LPS lied in SEC filings).

Effectively, this “review” is an effort at reputation/character assassination via the release of pretty much only one side of a “he said, she said” (Clarkson and Edwards were given a brief phone interview which was limited to two conversations Lawson had with them about their performance; they were given no opportunity to contest the allegations made in the subsequent interviews, which were not just with Lawson, Conners, and Muniz, but also five other members of the AG’s office).

To put it mildly, if you read the 85 page document and didn’t know the context (the extensive, widespread evidence of bad conduct and strained pleadings by the foreclosure mills and LPS, and the prior tip top reviews received by Clarkson and Edwards), you’d think they were fuckups of the first order and were lucky to have jobs. This is heresay presented as unvarished truth, and the unsupported (and as we will discuss later, often obviously untrue or at best misleading) charges extend to two Florida foreclosure fraud investigators, Lisa Epstein and Lynn Szymoniak.

To back up and give a bit more context first (and do read the very good overview by Dave Dayen), the Florida attorney’s general office recently underwent a regime change. The old AG, Bill McCollum, was a Republican but nevertheless launched some investigations into foreclosure abuses, specifically against the biggest foreclosure mills in the state. He left leave last January, replaced by Pam Bondi, who clearly has a much more conciliatory posture towards the mortgage industrial complex (she is on the executive committee of the now multi-state foreclosure settlement effort). In keeping, the old head of the economic crimes division was replace by the aforementioned Richard Lawson, who was in the business of defending white collar criminals, primarily banksters. And he made it clear that he wanted the fraud investigations to be treated “with great sensitivity.” I have to tell you, both in context and based on his actions, that means “go easy and do everything you can to protect the reputations of the parties charged.” Do you think this is even remotely the right priority for the head of an economic crimes unit?

The irony of this report are the repeated complaints about the “unprofessional” conduct of Clarkson and Edwards. Given that the IG considers a barely ordered document dump to be tantamount to a report, I find it hard to believe that the standard of professionalism among legal officers in the Florida government is measurable, let alone high enough for the two canned attorneys to fall short of it.

Similarly, for anyone who has been in the private sector (and that is where Lawson came from) the conduct of the firing was highly irregular. It’s normal for even routing firings to go through a process: the employee is given a warning and/or put on probation, with a witness present, they are told what concrete steps they need to take to improve performance, and notes of the conversation are entered into their personnel file. And most important, firings are always done with a witness present. Instead, Lawson had a one conversations with Edwards and Clarkson, and seems to conveyed his unhappiness primarily through their immediate boss, Robert Julian, who found Clarkson and Edwards to be “invaluable.” From what I can tell, assistant chief AG Robert Julian fired both Clarkson and Edwards verbally via Edwards alone, again a mind-boggling procedure. Lawson operated like a rank amateur, yet keeps harping on “professionalism.” More than a bit of projection at work?

There may be validity in the some substantive complaints. For instance, Lawson claims the duo mistakenly said the SEC was going after LPS when it was the FDIC who was probing LPS. They also called Fidelity a f/k/a (formerly known as) of LPS when it is the reverse (LPS was spun out of Fidelity). But these mistakes were in internal communications, and while they might be worrisome, what matters is what gets out the door. Another complaint is the case files being transferred from Clarkson and Edwards another attorney being in disorder. But we have no context. If Lawson made the assignment abruptly and didn’t give them Clarkson and Edwards time to organize them (and the state apparently lacks a document management system), it shouldn’t be a surprise that the materials were not well organized. In addition, at various points Lawson asked these investigators if they had evidence of allegations made against LPS, such as not being paid by the servicer, and Clarkson and Edwards saying “no”. Just because they did not have evidence in hand did not mean the allegations were untrue and not provable.

The reason I view even these complaints with skepticism is that much of what Lawson says that can be evaluated ranges from strained to embarrassing. Here are some examples.

In the “you cannot make this up” category, Lawson, a law enforcement official, defends forgeries:

Huh, is he SERIOUSLY trying to say that if, say, the janitor signs a corporate check he found lying around the office to pay the company electrical bill, it isn’t fraud? The knowledge in our culture that people sign documents only in their own name is so widely shared that it seems utterly implausible that ANYONE, let alone people in the business of preparing documents involved in legal procedures, could think forgeries are legitimate. The LPS filings by Masto have barely-above-minimum wage witnesses saying they were uncomfortable with “surrogate signing,” a recent Orwellianism for forgery, even after multiple management assurances that it was fine. Lawson’s formulation gets us into Humpty Dumpty “forgery is not forgery if I say it is not forgery” land. He is trying to wind the clock back to before the 1677 Statue of Frauds.

And we have this remark:

Gee, if that’s the case, why is this on the AG’s website now (note the last paragraph)? 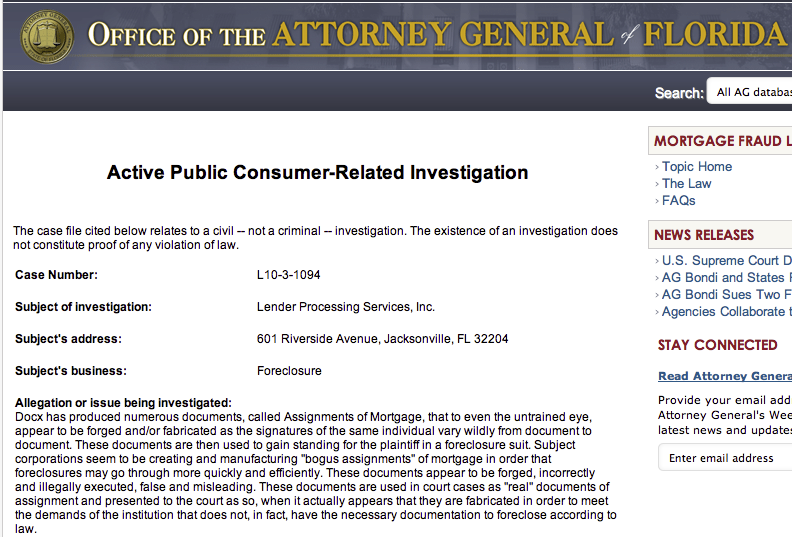 Similarly, Lawson also seeks to blame fallure of efforts against foreclosure mill Shapiro & Fishman on inadequate fact gathering by Clarkson and Edwards, when it fact that case was lost pure and simple JURISDICTIONAL reasons. The state Supreme court said the AG could not go after attorneys, that this was a matter for the judicial branch.

Lawson again criticizes Clarkson’s and Edward’s legal work because they were looking into dubious looking mortgage assignments. Lawson says he looked in a few legal reference books and concluded the lien didn’t matter, all that counted was the note. So he was effectively saying they were operating on a bad legal theory and off on a wild goose chase.

It might help if he’s get familiar with relevant decisions in his own state. Florida’s Fourth District Court of Appeals ruled specifically that this is not correct: a valid assignment is necessary before filing a foreclosure. And even more troubling, the attorneys in Bondi’s office did not inform the OIG investigator after this clarification, as required by the Code of Professional Conduct prohibiting lawyers from misleading a tribunal.

Lawson attacks a PowerPoint presentation by Clarkson and Edwards containing evidence of foreclosure abuses and forgeries. Lawson is unhappy with both the fact that it was released as well as its substance. Yet Dave Dayen points out it was requested and approved by the prior regime. It should have been excluded entirely from this investigation.

The most bizarre subtext is the complaint about the dealing with Szymoniak and Epstein. First, Lawson complains more than once about his staffers dealing with “foreclosure defense attorneys.” Ahem, if you are conducting an investigation, one of the first places you go is to parties making charges against the people you are targeting. Second, he criticizes them from accepting and using the documents they sent, when they are ALL public domain. Third, he seems upset that they obtained information via Florida’s public disclosure laws, which are arguably the most open in the nation. He tries charging that information was sent from the state improperly because they could not find evidence of written requests, when verbal requests are permitted under state statutes.

Par for the failure to validate any of the claims, we have this charge from the interview with Carlos Muniz:

There is a big problem with this: the subpoena was not released by the blogger in question, Lisa Epstein (again, part for stenography masquerading as a preliminary investigation, no one contacted either Epstein or Szymoniak even though both are mentioned repeatedly in the document). In fact, it appears that the first public mention of the Illinois subpoena of LPS was by the Illinois attorney general’s office on May 25, 2011 as reported by CNN. So if the AG released the subpoena, why would they call the Florida AG’s office to complain? In fact, AGs usually like publicity of their investigations. It seems far more likely that any complaint came from LPS.

So the message is loud and clear: if you take fraud seriously and try to combat it, you are at risk of career limiting attacks by people who care more about the reputations of the perps than about justice. The only hope here is that this report has so much in it that it patently untrue in it that it will blow up on the people trying to peddle the disinformation.