For those who are fond of depicting Occupy Wall Street as a bunch of hippies with no point of view, counterevidence comes in the letter submitted by the Occupy the SEC subcommittee for a joint subcommittee hearing tomorrow, January 18, of the House Financial Services Committee on the Volcker Rule. The title of the hearing broadcasts that financial professionals are ganging up against the provision: “Examining the Impact of the Volcker Rule on Markets, Businesses, Investors and Job Creation.” The supposed “business” representatives are firm defenders of the financial services uber alles orthodoxy, and there is a noteworthy absence of economists or independent commentators on the broader economic effects. The one non-regulator opponent to the effort to curb the Volcker Rule is Walter Turbeville of Americans for Financial Reform. However, they made the fatal mistake of accepting the banksters’ framing about financial markets liquidity and merely disputed the data submitted. Update: the hearing schedule I saw did not have Simon Johnson’s name on it, and he apparently made a very effective rejoinder to the folks who want to curb the Volcker Rule.

The letter is well documented and well argued. It goes directly after the financial services industry claim that implementation of a ban on proprietary trading will cause damage by hurting vaunted and mystical “liquidity.” An illustrative extract:

Moreover, much of the so-called “liquidity” that the banks have engineered, especially in opaque OTC markets, can be most appropriately termed “artificial liquidity.” As one commentator notes, the “very belief that the proliferation of financial derivatives and securitization techniques has enhanced global liquidity has been [the] core illusion driving the sub-prime bubble in the USA.

However, not surprisingly, Occupy the SEC was not invited to testify tomorrow. One of the members of the Alternative Banking Group, George Bailey, a compliance expert from a Big Bank You Heard Of, prepared this post to make the Occupy the SEC letter and related issues more accessible.

The Volcker rule comment process is entering its final phase. Today, the action moves to the House of Representatives when the heads of the regulatory agencies are scheduled to be grilled at two subcommittee hearings on the implementation. Eight representatives from the financial services industry and one representative from Americans for Financial Reform are also scheduled to testify.

Last week the Financial Times reported that the Japanese and Canadian regulators are complaining that Volcker rule will reduce US liquidity for their government debt. For good measure, Jamie Dimon re-joined the ‘don’t harm liquidity’ chorus last week during an interview with CNBC’s Maria Bartiroma. (at 12:08 in the clip), and again last Friday on the JPM earnings call. SIFMA , the financial industry trade group issued a study last week warning that implementation of the Volcker market making rules will severely reduce liquidity in the U.S corporate bond market. Yesterday John Walsh, the top regulator at the OCC remarked in his prepared testimony for today’s hearings that US banks will be operating at a competitive disadvantage to their foreign peers because of the Volcker restrictions on US banks.

The Volcker danger issue the financial services industry has been most loudly trumpeting recently is ‘Liquidity’. If it evaporates in key markets, the US financial markets and the US economy will suffer great harm.

In fact, the Oliver Wyman report is at odds with SIFMA’s position that financing for US businesses is facing a severe crisis if the Volcker market making restrictions aren’t weakened.

Corporate debt cash markets are historically illiquid. Wide spreads are a fact of life for corporate treasurers. Dealers are holding smaller inventories of bonds than they were pre Volcker. The spread widening may be muted by a still active and growing corporate CDS market, but since CDS trading will be moving out of the banks, the reality of wider spreads for corporate borrowers is already baked in. It’s not clear whether Volcker, or CDS restrictions, will have the greater impact on liquidity in these markets. The study concedes that this segment of the bond market will not be much affected by the Volcker rule. 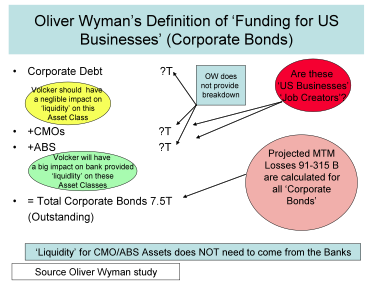 The Oliver Wyman study attempts to estimate the costs resulting from a loss in liquidity in the corporate bond market if the banks are prohibited from making markets in those markets. The major cost will result from mark-to-market losses if corporate bonds become difficult to trade. The loss estimates need be taken with a huge grain of salt. It’s beyond the scope of this piece to analyze the methodological assumptions, the liquidity modeling assumptions, the relative contribution of the asset class components to the overall loss estimates or the reasonableness of the pricing data used in the projections, Suffice to say the Mark to Market losses will be significant even if the estimates are wide of the mark.

The study is most useful in illustrating that the losses associated with corporate bonds will be come from the non corporate debt components of the corporate bond super class.
The Oliver Wyman conclusions gloss over this distinction and present its corporate bond market disruption figures as broadly impacting all ‘American Businesses’.

The non-bank Asset Managers are taking a separate tack in attacking the Volcker rule in today’s hearing. They acknowledge that providing liquidity as a market maker requires the ability to run a corresponding prop trading book. Yet Volcker prohibits prop trading at the banks.

The Volcker restrictions on prop trading at the banks will limit banks ability to provide liquidity to the Asset Managers. The Asset Managers appear to hope to resolve the dilemma by pressuring Congress to pressure the regulators to loosen the market making exemption. Lord Abbet summarized the asset managers concerns:

Recently investors collectively responded to global political and economic risk by reducing exposure to riskier securities. If dealer banks had been prohibited from building positions and were instead forced to find a buyer for every security sold, prices would have fallen much further than they did. Banks were able to absorb the avalanche of high-yield securities in their trading accounts and were at the same time able to perform a function that long-only asset managers could not: hedge the risk. Whether through use of credit default swaps, high-yield bond index futures, or other measures, dealer banks can mitigate their exposure to this inventory while participating in the markets and, in the process, help to dampen market volatility. If banks are skeptical of how such positions may be perceived by regulators under the Volcker Rule, then banks will no longer engage in these activities, further limiting liquidity and potentially increasing volatility.

Alliance Bernstein makes the same point in their comment letter.

It’s clear that the Asset Managers are concerned about the prices of the assets that may be orphaned if banks are forced to exit the market. Their position highlights the main issue, that the banks are less concerned about funding US businesses than they are about protecting the holders of corporate bonds, including themselves, from realizing losses.

What Liquidity are the Asset Managers Worried About?

There is no evidence that the current level of trading activity in financial markets is desirable or optimal, either on a national or global level; indeed, numerous proposals to implement transaction taxes are based on the view that the amount of trading activity system-wide should be reduced. The US Congress has determined that its regulators should not take measures to preserve the current level of trading activity. If trading is not economical when no longer supported by artificially cheap funding, that likely means that it does not serve a legitimate real-economy purpose. Volcker is designed to curb speculative position-taking at US government-backed banks. Restricting market making at the US banks removes a source of artificially cheap funding to the market. It is the US regulators’ responsibility to ensure that trading activity migrates out of government-backstopped banks.

The Oliver Wyman study clearly shows the asset classes facing the greatest liquidity risk from the proposed rules are those that are currently mispriced, which Volcker intends to drive out of the banking system.

Who will be hurt if liquidity is limited? 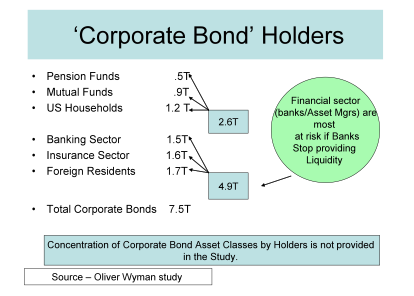 “If you lose liquidity and market makers, it will cost retirees, pensioners, and the military more money to invest their money,” said Dimon, urging Congress to be “careful not to destroy that.”

According to the Oliver Wyman study, Pension fund and mutual funds (retirees, pensioners) and US Households (a portion of which are middle class savers) hold only 3/8 of the corporate bonds included in the study. Perhaps Mr. Dimon is referring to the increased transaction costs, but from my read of the study the financial services industry is in an awful spot if the study’s MTM loss projections are remotely accurate. Suggesting that Grandma and GI Joe face the same risks as the bankers should be beyond the pale.

In the end the Oliver Wyman study is much ado about nothing, or at least much ado about much that is hidden from view. The study clearly shows that the financial industry continues to demand government protection. The Volcker rule threatens to take that protection away. But as the study shows, MTM losses already exist and are orphaned within the banking system for the moment. The financial services industry would prefer to leave them there.