In 2008 profits in the US economy crashed out. But they soon bounced back. This bounce was largely due to the profits being reaped in the financial sector – which sickened many given that 2008 was in large measure caused by the financial sector. This always struck me as odd – not to mention unsustainable. If the ‘real’ economy is in the doldrums you can be sure that, in the medium to long run, the business class will go down with it.

In what follows I will draw on Chris Cook’s post on this site the other day to argue that, if he is correct (and I think he may be), judgment day is just around the corner for the profiteers. Soon they will have to learn that you cannot financial engineer your way to profitability forever, especially when the rest of the economy is withering. Who knows, this may even inspire what has come to be called the 1% to focus their attention on the problems that have arisen in the global economy in recent months – for they have been truly burying their heads in the sand for the past three years.

But first, let us look at this incredible post-2008 resurgence of profitability.

From Profit Bust to Profit Boom

When the world financial markets crashed out in 2008 profits hit the wall. Yet, they did not hit it quite as hard as one might expect. As the below graph shows profits did not even reach the levels they did during the 1983 recession as a percentage of GDP. 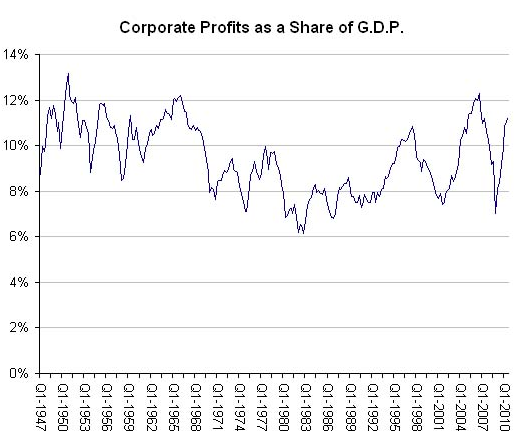 I think that the reasons for this have largely to do with the manner in which wealth has come to be distributed in the US. As the below chart shows a far greater proportion of national income now goes to profits than was the case in 1983 when labour compensation was at an all time high. 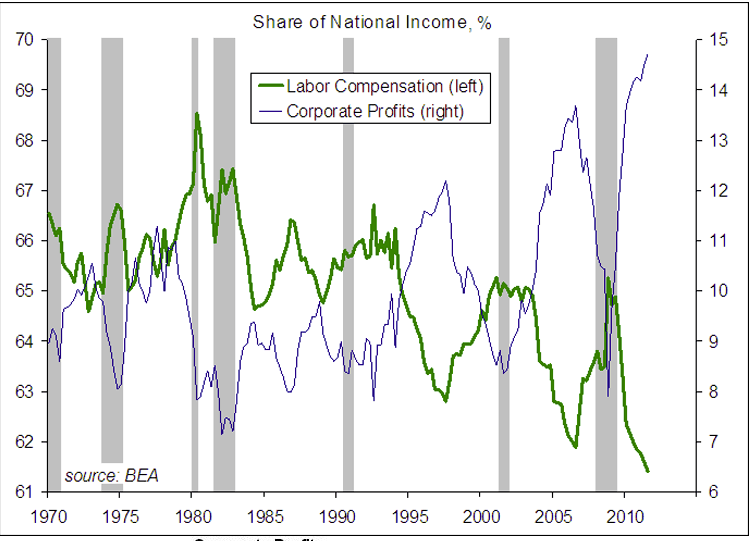 If we take this into account we can then appreciate that the hit that profits took in 2008 was quite substantial.

But then we saw a major kick back in profitability. Have a look at that first chart again. As a percentage of GDP profits soon nearly reached their pre-crash levels. Yes, a lower rate of GDP growth probably had an effect on this, but even if we simply look at the nominal level of corporate profits (below) we will see that they surpassed their previous height in 2008 despite the crisis. 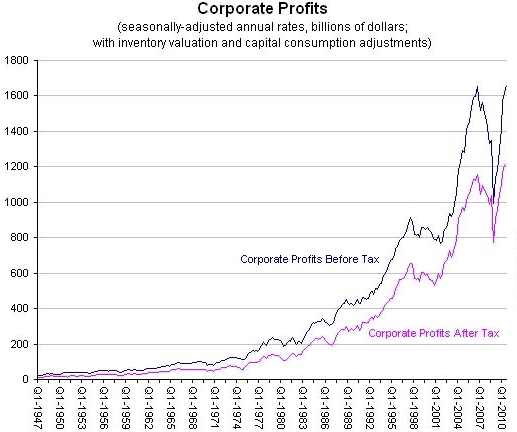 We can safely say that, while unemployment soared and people found themselves completely drowning in debt, profitability essentially made a comeback. Many publications that were not known for their left-wing or redistributive credentials, noted this phenomenon. In 2010 The Economist magazine wrote:

One of the many oddities of the current joyless economic recovery is that this traditional enthusiasm is strikingly lacking. Corporate America has bounced back impressively. The quarterly results season that is now nearly over has revealed that profits are back within a whisker of the all-time highs achieved before the downturn in late 2008. By some calculations, the rate of recovery of profits from their trough is the strongest since the end of the Great Depression.

An oddity indeed. One can palpably sense in such pieces a suspicion that this bounce back in profitability might be too good to be true. Certainly, it does seem so. And when we look at the source of this new profitability our suspicions only mount. All this profitability was coming, as hinted at in the intro, from the financial sector. Just look at the graph below. 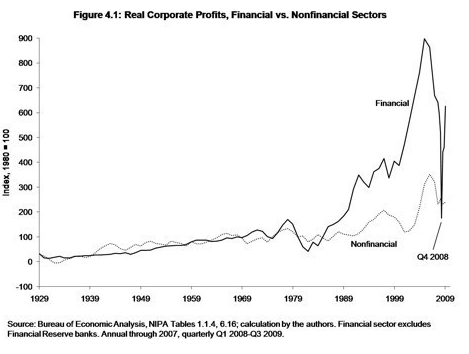 It was financial profits that made a roaring comeback, not profitability more generally. That graph only charts up until 2009, but if we look at the more recent data it correlates. Below is a graph charting the percentage of total domestic profits that is accounted for by financial sector profits. 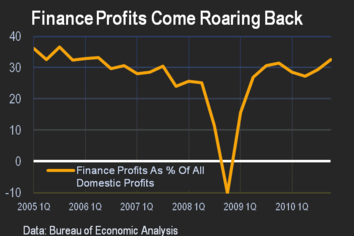 Top-line, or pretax, operating profits economywide hit a record high at the end of 2010. All of the gain was in the financial sector…

Since [the crash in 2008], the sector has come roaring back. The GDP report shows finance profits jumped to $426.5 billion. While profits haven’t returned to their high levels of 2006, the gain in finance profits last quarter more than offset a drop in profits posted by nonfinancial domestic industries. (My emphasis) 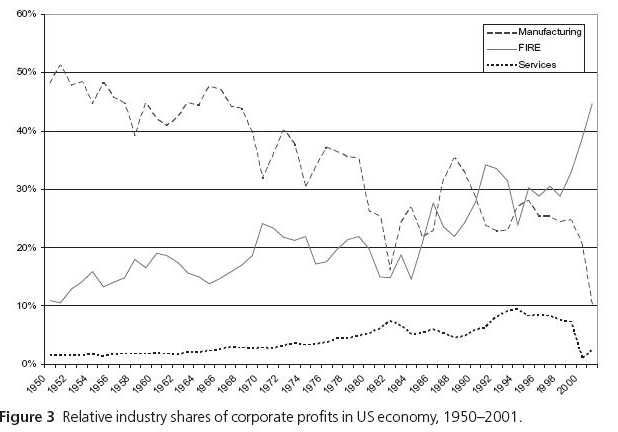 This was simply carrying on a trend we’ve been seeing in the US economy – and probably much of the Anglo-Saxon economies – for some time now. Look at the below chart that shows how the different business sectors contribute to profitability.

That graph, of course, shows the rise of the bubble economy of the 1990s and the 2000s like no other. It also leads one to suspect that the resurgence of profitability after 2008 was, to some extent at least, due to the inflating of yet another bubble.

Instinctively many of us feel this. It seems so obvious. The economy is doing horribly and yet, for all their complaining, Wall Street does not seem to be doing so badly. Frankly, that stinks; not just morally, but logically and economically. The financial community are supposed to channel funds into productive activity, thereby turning a profit while increasing investment and economic growth. If they’re not doing that and they’re still making money – well, chances are that they’re blowing more bubbles.

The article run on this site the other day by Chris Cook may point in what direction this remarkable resurgence in profits came from. Let us briefly run through Cook’s argument before we go any further.

Chris Cook argues that financial investors have fled into commodities and inflated a bubble which they are using to keep their margins up. While one is tempted to reach for the gun shouting “speculation!” one should be more careful. According to Cook, this is not the cynical, greed-fuelled speculation that led to the pre-2008 housing bubble. No, this something altogether different. This is a bubble mainly based on fear. But such makes it no less ominous.

First a run through of the structure of the modern oil market as Cook portrays it.

Basically what has occurred in the oil markets in the past few years is that oil has begun to be traded as an inflation hedge. Investors trade dollars for oil to ensure that, in the event that the value of the dollar is eroded by inflation, they possess something that holds its value. It’s a bit like the strategy of the gold bug. Fearing inflation they give away their dollars that they think to be declining in value for something ‘tangible’ that they believe will hold its value or appreciate.

On top of this Cook tells us how Big Oil and Big Finance have locked arms in this regard. Each has something the other wants: Big Finance has access to dollar loans that can be used to ensure that, should oil decline in value, Big Oil has ample amounts of dollar liquidity lying around. Meanwhile, Big Oil has plenty of barrels of crude lying around that can be exchanged for dollars, thus allowing Big Finance to hedge against any inflation that may take place.

Such an institutional arrangement has given rise to a highly opaque and unstable market that few can see into. Indeed, no one really knows just how much oil is being ‘held’ as an inflation hedge by Big Finance. These stockpiles have even gained themselves an ominous name within the industry (recently christened by Izabella Kaminska over at FT Alphaville who has been doing some of the best work on this): Dark Inventory.

Looking at recent market trends Cook raises concerns that we could be seeing the beginnings of the end of a bubble that began to inflate in the oil market after the crash of the previous bubble in 2008. This bubble, Cook argues, was inflated due to inflation fears after the QE programs undertaken by the Federal Reserve and the Bank of England. With the markets awash with dollar and sterling liquidity, banks and investors piled into commodities to escape what they saw to be a looming inflation.

In recent months Cook focuses on the move of the market from a position of ‘contango’ to a position of ‘backwardation’ – which he sees as evidence of a bubble deflating. While some investors read in this that the short-run demand for oil has risen, Cook points out that with the global recession grinding along there is no fundamental reason that this should be occurring. Instead Cook sees in this move a sign that the long-run demand for oil is falling as the current bubble begins to burst.

Cook thinks that the price collapse is going to be very painful – falling possibly as low as $45-$55 a barrel. In response to this OPEC will try to ramp up prices by cutting production and, most importantly for our purposes, a financial crisis of sorts will occur as inflation hedged investors see their net worth cut to pieces.

If this is as Cook says – if this is a bubble of fear and it bursts – the financial sector is going to see a huge wiping out of the profits they have been reaping from it. We have no way of knowing how much profitability is tied up in these dodgy markets – but my thinking is: a lot.

One could speculate for hours on what happens to the economy next. Certainly lower oil prices will mean higher effective demand for other goods and services. On the other hand, the rich will undoubtedly be licking their wounds in the case of such a collapse and will retract spending (think: the ‘capitalist consumption’ part of the Kalecki profit equation). Pension funds and the like will also likely see red ink ooze from their balance sheets.

However, there is something else to consider – something alluded to at the start of this piece. For the first time the rich may see no tangible way to regain their lost income. In short, they may not see any other potential bubbles to inflate.

In the past few decades the real economy has become increasingly financialised. And so, as shown in the first half of this piece, nonfinancial companies have been able to maintain their profitability through their financial arms despite the real economy of production, distribution and consumption stagnating. If financial profits fall off a cliff they’ll have little left to hold onto. They’ll be in the ditch with their financial buddies.

Certainly this could push our elites to take real action and expand fiscal policy and with it the real economy. We all know Big Finance’s lobbying power and if they began to really see their profitability tied up with the real economy we might see our ignorant and shameful governments getting off their asses and actually doing something about our economic problems.

So, perhaps this will be a positive development in the long run. But in the short run this will be anything but. With their profitability squeezed, businesses are likely to turn on their workers and attempt to cut their wages and living standards. At this point we could well see a true depression taking shape in which businesses cut workers and wages to increase profitability, all the while profitability continues to fall as the unemployed and underpaid buy less and less stuff.