Yves here. Mark Ames’ post discusses the institutionalization of a regressive policy, that of trying to eke more corporate growth out of extracting more and more out of workers rather than sharing the benefits of productivity gains with them. As we’ve discussed, Henry Ford, who was hardly a chartable sort, voluntarily doubled the wages of his workers, both to improve retention but also to enable them to be able to afford to buy his products.

As Thomas Palley has discussed, and the chart below underscores, the US changed in the early 1980s from a model where rising worker wages were seen as the driver to growth and hence a focus of policy, to one where rising consumer debt levels and asset appreciation were used to substitute for stagnant incomes.

The problem, as we discovered in the crisis, is that that paradigm is self limiting. Yet as Ames reveals, McKinsey and presumably other fonts of orthodox thinking are pushing for an even more aggressive version of that failed model.

This article was first published in ConsortiumNews.com

A little over a year ago, while researching the Confederacy’s economy, I stumbled across this unnerving graph charting the value of America’s “stock of slaves” in the last decades before the Civil War.

This graph tells the real story behind the South’s secession: the value of the South’s “slave stock”—the property of the ruling class — soared as secession approached, reaching an almost 90-degree angle in those final years before Harper’s Ferry. The South’s ruling class seceded to protect their riches, period: 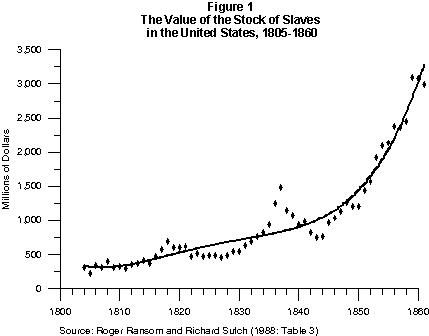 From afar, if you didn’t know that human “slave stock” was the asset being charted, you could easily mistake this graph, and its parabolic trajectory, for one of the many destructive asset bubbles this country has suffered right up through our own time.

Up close, this graph drips greed, mass murder and shame — it strips away the historical revisionism that falsely ascribed the South’s “cause” to an almost selfless, tragically romantic attachment to “tradition” and “culture”; it gives lie to the myth that slave owners kept their slaves to the detriment of their own bottom line.

Like the worst wars and the worst of history’s villains, the Confederacy’s one percenters seceded and fought in order to continue profiting from their most valuable investment properties — their human slave stock.

The graph comes from a grim working paper, “Capitalists Without Capital”, written in the late 1980s by a UC Berkeley economist, Richard Sutch, and a UC Riverside historian, Robert Ransom.

As they showed, slavery produced huge profits for southerners who invested in slave capital — to the detriment of all other portfolio investments, as the value of slaves soared in the mid-19th century. By that time, by far the largest cotton-growing states’ wealth was in slave stock, not in real estate or other investments.

The slave trade was outlawed in 1808; but the slave population quadrupled from 1 million in 1800 to 4 million in 1860 — encouraged by slaveowners who “bred” their human stock, thereby multiplying their profits as the value of each slave rose.

Slavery is often portrayed by revisionist historians as somehow antithetical to market capitalism; in reality, slavery was a winning portfolio investment, the very incarnation of just how evil “free-market” capitalism can be. As the authors write:

“If slaves … were an investment included in the asset portfolio of the planter/entrepreneur, they helped satisfy the owner’s demand for wealth. But unlike most other forms of capital, which depreciate with time, the stock of slaves appreciated. Thus, the growth of the slave population continuously increased the stock of wealth.”

What makes this graph so disturbing for us in 2012 is what it suggests about today’s “1 percent” — and how they view the rest of us. It gives form to the brutal crackdown on the Occupy protests — and suggests darker things to come as we try to free ourselves from their vision of civilization, and our place in it.

Contrast that with this McKinsey report put out a few years ago by the director of the consulting group’s New York office. Titled “The New Metrics of Corporate Performance: Profit Per Employee”, the report argues that the best performing firms in our increasingly financialized era are those companies that have learned to squeeze ever-larger profits out of each employee — and not by the more traditional “return on investment” metric.

The McKinsey report looked at the world’s 30 largest companies between 1995 and 2005, and found that their return on human capital more than doubled, from an average of $35,000 profit per employee to $83,000, leading to this rather frank and nauseating conclusion:

Extracting rent from “employees” as a business strategy: This is supposed to be the language of feudalism, not modern advanced capitalism — and yet this is the cutting edge in 21st century capitalist thinking, unashamed and unvarnished:

“One way to improve a company’s profit per employee is simply to shed low-profit employees. But if they generate profit greater than the cost of the capital used to support their work, shedding them actually reduces the creation of wealth.”

As with slave stock in a Southern investor’s portfolio, the McKinsey report argues that as a corporation learns to successfully extract rent from its employees, the more employees it extracts rent from, the greater its aggregate profits. 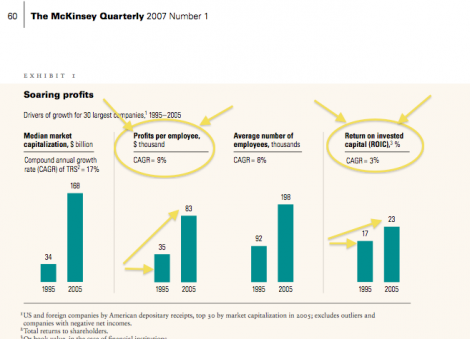 The new metrics: How much “rent” can be extracted from employees, not investments

To compare “the 99 percent” to African slaves would be crude; but the mindset of “the 1 percent” then, as now, is eerily consistent. They view the rest of us not as human beings with rights, but as livestock whose meat is “rent” to be extracted.

This is the language of plutocratic capitalism, a brutal system totally incompatible with democracy and antithetical to republican government and civilization. It is the language of misery, and misery is what “the 1 percent” is promising “the 99 percent” for years to come, in ever-greater doses.