Here’s a chart of Intuit’s lobbying expenditures in Congress, courtesy of Open Secrets. I suspect that some of that nine million dollars of lobbying by that company since 2008 has gone to making it more annoying for you and me to file our taxes. 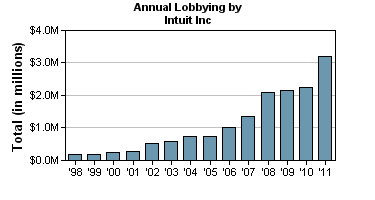 Here’s what I mean.

In some countries, the equivalent of their IRS sends citizens a form listing what they owe.  In California, the state has a program called ReadyReturn that lets you do this for California state taxes.  You sign it and send it back, and it takes a few minutes. But for most of us, this isn’t how it works.  We gather our tax forms and various banking information, and spend the weekend facing a difficult bureaucratic set of forms, hoping we did it all correctly.  Or we use a costly tax filing service or software.

Candidate Barack Obama promised to end this nightmare.  He said he would “dramatically simplify tax filings so that millions of Americans will be able to do their taxes in less than five minutes.”  The IRS would use information it “already gets from banks and employers to give taxpayers the option of pre-filled tax forms to verify, sign and return.”  Experts, he said, estimated this would save 200 million total hours or work and $2 billion.

You can file this under yet another broken campaign promise.  And why?  Who doesn’t like an idea that is so simple and convenient and just generally helpful?  Well, the large software makers, for one.  Intuit in fact lobbied incredibly hard to kill the California program Ready Return (complete with attacks from right-wing tax groups).  Intuit wasn’t completely successful, but under their pressure, California budgeted only $10,000 to get the word out to residents about the program.

And the risk to Intuit is real – here’s what Intuit said in its investor report, describing risks to its business model.

“Our consumer tax business also faces significant competition from the public sector, where we face the risk of federal and state taxing authorities developing software or other systems to facilitate tax return preparation and electronic filing at no charge to taxpayers.  These or similar programs may be introduced or expanded in the future, which may cause us to lose customers and revenue. For example, during tax season 2010, the federal government introduced a prepaid debit card program to facilitate the refund process. Our consumer and professional tax businesses provide this service as well.

In other words, Intuit will lose a lot of money if the government makes it easier to file your taxes.  So how did Intuit manage to prevent the implementation of Obama’s campaign promise?  Here’s what Intuit had to say about its strategy.

Although the Free File Alliance has kept the federal government from being a direct competitor to Intuit’s tax offerings, it has fostered additional online competition and may cause us to lose significant revenue opportunities. The current agreement with the Free File Alliance is scheduled to expire in October 2014. We anticipate that governmental encroachment at both the federal and state levels may present a continued competitive threat to our business for the foreseeable future.”

What is the Free File Alliance?  It’s a coalition of 14 software makers that have signed an agreement with the IRS to provide tax preparation software to the public.  You see, the IRS was mandated to provide free online tax prep services to the public, so it outsourced this to existing commercial tax preparers.  This agreement was first signed with the Bush administration IRS in 2002, renewed in 2005, and then renewed again under the Obama administration in November, 2009.  Even today, despite the Obama campaign promise and demonstrated success around the world, the Free File Alliance indicates on its web page that “Treasury has indicated it does not want the IRS to enter into the tax software business.”  And Intuit said on its investor report that this alliance “has kept the federal government from being a direct competitor to Intuit’s tax offerings.”

I’ve been emailing back and forth with White House liaison Jesse Lee over the past few days about this.  I’ve asked why the administration has not implemented its campaign promise on pre-filed returns, and I included the information about the Free File Alliance.  The agreement with the Free File Alliance does not in fact preclude the IRS from implementing a pre-filing program, so it’s possible this is in the works.  Jesse Lee replied, “checking on this’”  I’ve sent two follow-up emails, and I’ll let you know what else he says.