In case you got frustrated with bounced mail, I’ve fixed that for now. It was an over the quota mailbox.

Department of Homeland Security buying up enough ammo to wage seven-year war against the American people Natural News (furzy mouse). One way to deal with the fact that pretty much everyone in America has a gun. Maybe a Kevlar vest should be part of your wardrobe…

100,000 women undergo brutal genital mutilation illegally in Britain (and some of the victims are as young as TEN) Daily Mail

Unplugging Americans From The Matrix Paul Craig Roberts (May S)

Abroad, as at home, Obama coasts on a wave of disappointment Guardian (May S)

Chris Whalen: The Fallacy of “Too Big To Fail”–Why the Big Banks Will Eventually Break Up Financial Sense

New federal agency OFR stirs ‘Orwellian’ fears FoxNews. Hah, Fox’s rant suggests this unit might turn out to be effective, although with it under Turbo Timmie, I would not get my hopes up.

Here Is What The “Other” Financial Health Metrics Are Showing ZeroHedge. I am making an exception to my usual practice because our Tom Adams highlighted this post, which highlights some Nomura research, as a counterpoint to some Floyd Norris cheerleading. FYI Richard Koo, who gave us the concept of “balance sheet recession” is an analyst at Nomura, and he stresses that in balance sheet recessions, many people in the private sector give top priority to lowering debt levels rather than maximizing profit.

Antidote du jour. Craazyman seems to find horse pictures troubling (is it because horses symbolized power for Native Americans?) but these are Icelandic horses so I am pretty sure they like the weather, even if it might be awfully bracing for the rest of us: 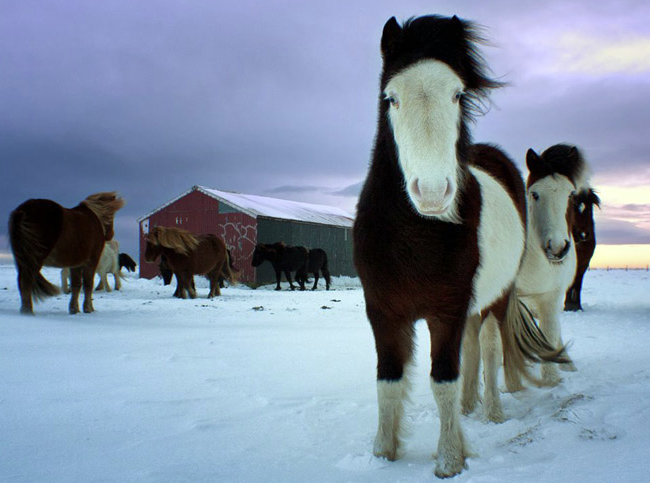 And here is as bonus of sorts. Friend of NC and tax expert Lee Sheppard appears in the movie We’re Not Broke, a documentary on the taxation, or more accurately, the lack thereof, of big corporation. If you are in LA, you can see on the 25th or on the 28th in Boston (details here, along with screenings in other cities). I was overseas when it ran in New York, but a second showing is apparently in the offing.