Yves here. Notice how someone in the officialdom actually said “There is no alternative”. Nothing like being explicit.

Overnight, Greek Leftist leader, Alexis Tsipras, gave up on his attempts, or at least pretence of them, to form government. The gauntlet has now been handed to PASOK leader, Evangelos Venizelos, who again has 3 days to attempt the same.

Given that New Democracy, Venizelos’s potential coalition partner, has already failed to create a workable coalition it is doubtful PASOK will succeed. Neither Tsipras or Samaras used their fully allocated time suggesting there is little point dragging out talks as no comprises could be reached.

Greece appears to be heading back towards an interim technocrat government and new elections unless the Greek President is able to muster a workable coalition in the coming days. New elections may bring new alliances, but it is yet to be seen what the new political strategies will appear after the demolition of the centrist parties.

Overnight the EFSF board agreed to make an additional payment to Greece in order to keep it technically solvent for a few more weeks:

After a conference call, the board of the European Financial Stability Facility, the 700 billion euro bailout fund administered by the 17 countries that use the euro, agreed to make the scheduled payment, which will allow Greece to meet near-term bond redemptions and other obligations.

An initial 4.2 billion euros will be paid on Thursday, while the remaining 1 billion will be paid out later, “depending on the financing needs of Greece,” a statement said.

It said the remaining 1 billion was not needed before June.

This may appear as a back down but realistically it is just a payment in order for Greece to hand the money back again. Greece has approximately €3 billion worth of bonds held by the ECB maturing this month and also the non-greek law PSI bonds to sort out. This is very much a case of drip feeding money in order to protect greater Europe from the contagion of a default.

In the meantime the rhetoric from outside of Greece has ramped up a notch with European Central Bank Executive Board member Joerg Asmussen quoted as saying:

The ECB currently holds €40 billion of Greek bonds and its banks have €140bn in repos. In that regard Mr Asmussen appears to be having an argument with a loaded gun, and this has very much turned into a game of chicken.

But members of the ECB aren’t alone in publicly announcing Greece’s choice. Until recently, speaking of a Greek departure from the Euro was completely out of bounds. But, as Bloomberg reports, the economic and political realities of the situation appear to have changed all of that:

From the monetary fortress of the European Central Bank to the pro-European duchy of Luxembourg, policy makers are beginning to air their doubts that Greece can stay in the euro.

Post-election tumult in Athens has put the once-taboo subject of an exit from the 17-country currency union on the agenda, lifting the veil on possible scenario planning afoot behind the scenes.

The world is witnessing an “important moment in European Union history, a moment of crisis,” EU President Herman Van Rompuy said in Brussels on the 62nd anniversary of the declaration by Robert Schuman, then France’s foreign minister, that launched postwar European integration.

Let’s hope there is some form of compromise on both sides, but at this point in time it is very hard to say what is going to happen either way.

Greece, however, wasn’t the only problem overnight. Spain once again came to the fore as its 10 year bond yields rose 4.02% to reach 6.078%. Meanwhile the Spanish stock market indicator, the IBEX 35, closed down 2.77% overnight which took it back to levels not seen since October 2003 and it now sits lower than it did at the height of the GFC:

Overnight rumours of plans to attempt to bolster the banking system, including huge jumps in capital requirements, hit the news wires:

The government will become the largest shareholder in the bank that has the biggest Spanish asset base, said the official, who declined to be named because the plan hasn’t been announced.

It’s also working on a plan to force banks to set aside more provisions on real estate loans that are still healthy, said a person familiar with the situation, who also declined to be identified. The rules, to be approved on May 11, will increase provisions on the loans to about 30 percent from 7 percent, creating an additional buffer of about 30 billion euros ($39 billion), the person said.

Rajoy, who said for the first time this week he may use public money to shore up banks, is trying to restore trust in the financial system without overburdening public finances.

As I have explained previously, Spain’s major economic issue the loss of private sector wealth from over exposure to a deflating housing bubble which, in the absence of a major push in counter cyclical fiscal policy, is leading to a surge in bad debts in the banking system.

Spanish house prices accelerated downwards in April with the YoY falls hitting 12.5%. The accumulative falls since the peak are now 29.8% 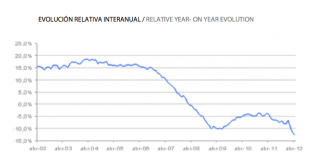 With asset devaluations like that it is very difficult to see how the Spanish taxpayer is going to stay unencumbered under any new plan.