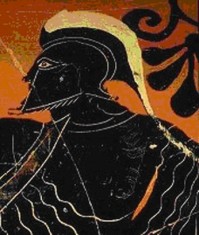 For Memorial Day Weekend, I thought I’d curate a few documents on war. Here’s the second:

The translation is Richmond Lattimore’s. The Trojans have set fire to the Greeks’ beached ships, but the Greeks (Danaans, Achaians) are now driving them back from the shore:

[297] And as when from the towering height of a great mountain Zeus
[298] who gathers the thunderflash stirs the cloud dense upon it,
[299] and all the high places of the hills are clear and the shoulders out-jutting
[300] and the deep ravines, as endless bright air spills from the heavens,
[301] so when the Danaans had beaten from their ships the ravening
[302] fire, they got breath for a little, but there was no check in the fighting;
[303] for the Trojans under the attack of the warlike Achaians
[304] had not yet turned their faces to run away from the black ships.
[305] They stood yet against them, but gave way from the ships under pressure.
[306] There man killed man all along the scattered encounter
[307] of the leaders, and first among them, the strong son of Menoitios,
[308] threw and struck Areïlykos in the thigh, as he turned
[309] back, with the sharp point of the spear, and drove the bronze clean through.
[310] The spear smashed in the bone and he fell to the ground headlong
[311] on his face. Meanwhile warlike Menelaos stabbed Thoas
[312] in the chest where it was left bare by the shield, and unstrung his limbs’ strength.
[313] Meges, Phyleus’ son, watched Amphiklos as he came on
[314] and was too quick with a stab at the base of the leg, where the muscle
[315] of a man grows thickest, so that on the spearhead the sinew
[316] was torn apart, and a mist of darkness closed over both eyes.
[317] Of the sons of Nestor one, Antilochos, stabbed Atymnios
[318] with the sharp spear, and drove the bronze head clean through his flank, so
[319] that he fell forward; but Maris with the spear from close up
[320] made a lunge at Antilochos in rage for his brother
[321] standing in front of the corpse, but before him godlike Thrasymedes
[322] was in with a thrust before he could stab, nor missed his quick stroke
[323] into the shoulder, and the spearhead shore off the arm’s base
[324] clear away from the muscles and torn from the bone utterly.
[325] He fell, thunderously, and darkness closed over both eyes.
[326] So these two, beaten down under the hands of two brothers,
[327] descended to the dark place, Sarpedon’s noble companions
[328] and spear-throwing sons of Amisodaros, the one who had nourished
[329] the furious Chimaira to be an evil to many.
[330] Aias, Oïleus’ son, in an outrush caught Kleoboulos
[331] alive, where he was fouled in the running confusion, and there
[332] unstrung his strength, hewing with the hilted sword at the neck,
[333] so all the sword was smoking with blood and over both eyes
[334] closed the red death and the strong destiny. Then Peneleos
[335] and Lykon ran up close together, since these with their spear-throws
[336] had gone wide of each other, and each had made a cast vainly.
[337] So now the two of them ran together with swords. There Lykon
[338] hacked at the horn of the horse-hair crested helm, but the sword blade
[339] broke at the socket; Peneleos cut at the neck underneath
[340] the ear, and the sword sank clean inside, with only skin left
[341] to hold it, and the head slumped aside, and the limbs were loosened.

The Greeks were led in this foray by Patroclus, wearing Achilles’ armor. At the end of Book XVI, the Trojan Hector kills Patroclus, who dies prophesying Hector’s death. By the end of the epic, Hector dies by the hand of Achilles, who has returned to battle, enraged at Patroclus’s death.

So Book XVI may be seen as the pivot on which the plot turns. I recall Book I verse 1 as “This is the story of the wrath of Achilles,” but Lattimore has “Sing, goddess, the anger of Peleus’ son Achilleus,” and the more literal prose translation from The Perseus Project has “The wrath sing, goddess, of Peleus’ son, Achilles,” putting wrath first. As it should be?

NOTE I’m even less a Greek scholar than I am a Civil War scholar; and although I’m not sure Lattimore’s translation is the most musical, it seems to the one that’s online; readers more expert than I am can post their own sources or versions in comments!