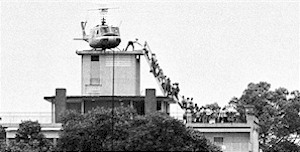 For Memorial Day Weekend, I thought I’d curate a few documents on war. Here’s the third, and last:

Unlike many Clash (and punk) songs, “Straight to Hell” is long, slow, and sinuous. The drumming — “one, two, three, four” — conjures stomping, then dancing boots (“boots on the ground”); the rhythm guitar calls up memories of the thwop, thwop, thwop of helicopter blades; and the lead guitar lacerates and howls like barbed wire woven from grief and rage.

Unlike poetry, the lyrics aren’t meant to be understood apart from the performance, but I want to annotate some of them, so for reference here they are:

1 If you can play on the fiddle
2 How’s about a British jig and reel?
3 Speaking King’s English in quotation
4 As railhead towns feel the steel mills rust
5 water froze in the generation
6 Clear as winter ice
7 This is your paradise

12 Wanna join in a chorus
13 Of the Amerasian blues?
14 When it’s Christmas out in Ho Chi Minh City
15 Kiddie say papa papa papa papa-san take me home
16 See me got photo-photo
17 Photograph of you and
18 Mamma Mamma Mamma-san

34 Can you cough it up loud and strong?
35 The immigrants
36 They wanna sing all night long
37 It could be anywhere
38 Most likely could be any frontier
39 Any hemisphere
40 No man’s land
41 There ain’t no asylum here
42 King Solomon he never lived round here

[1] “You” The Vietnamese son (“boy”) of the American soldier and his Vietnamese wife, and those for whom he is a figure. The speaker, the “I” represented by the singer (“Lemme tell ya” [19]), is less clear (much unlike Sherman, and Homer). For example, “It ain’t Coca-Cola it’s rice” [20] is spoken to the child, but the speaker could be the soldier, the mother, or any (American) authority figure. All the speakers seem to share a phantasmagoric collective unconscious defined by the failure to win asylum (safety, sanctuary, peace), in life or in language, wherever and however sought.

[2] “British jig and reel” Isn’t a jig Irish in origin, and not British?

[3] “King’s English” Which “boy” will be as unlikely to speak as any other immigrant, member of a subject population, or working class child with little education and bad teeth. Study though they may.

[18] “Mamma Mamma Mamma-san” Mamma-san can only be the boy repeating a phrase he has heard, possibly from the soldier; it’s “pidgin used by American servicemen for any older Vietnamese woman”, making her situation even more poignant. So but and see note on [42].

[25] “So Mamma-san says…” And how does the mother know about the hell that follows starting at [26]?

[32] “volatile Molotov” Word play unlikely to be from the mother.

See the NOTE below for liner notes-like discography, and links to some coherent interpretations.

NOTE “Straight to Hell” was recorded live September 8, 1982 at The Orpheum, Boston, MA. I saw The Clash live at The Harvard Square Theatre, February 16, 1979. Best rock and roll concert I’ve ever been to, bar none. See here and here for some appreciations of the song.