There was rending of garments and wearing of sackcloth last week when the jobs report came in at only 80,000 new jobs created in June, the third disappointing report in a row. Pundits looked to find cheer despite the disappointing outcome. For instance, the number of hours worked rose, and 25,000 temps were added, which the optimists used to contend that employers saw more demand, but weren’t quite confident enough to make permanent hires. Citigroup’s Tobias Levkovich argued that more firms are planning to add jobs. The gloomsters pointed out that global manufacturing output is weakening, and new orders in particular are signaling contraction. And John Hussman noted (hat tip Scott):

As for the June employment figures, the internals provided by the household survey were more dismal than the headline number. The net source of job growth was the 16-19 year-old cohort (even after seasonal adjustment that corrects for normal summer hiring). Employment among workers over 20 years of age actually fell, with a 136,000 plunge in the 25-54 year-old cohort offset by gains in the number of workers over the age of 55. Among those counted as employed, 277,000 workers shifted to the classification “Part-time for economic reasons: slack work or business conditions.”

But as much as analysts desperately pour over the entrails of new data to make prognostications, it seems that many forecasters keep making comparisons to past recoveries, when typical recessions are inventory-driven (more than 100% of the change in GDP is change in inventories). As we are often reminded, the aftermath of a financial crisis, particularly a global financial crisis with a concerted effort to protect banks, is a very different beast. Some analysts do incorporate that perspective, but they still seem to be in the minority. “This time it’s different” is much more popular on the upside than downside.

As Sell on News at MacroBusiness observed a few days ago:

There are many studies that show that economic forecasts have a poorer success rate than tossing a coin. They tend to work when they are obvious and are rarely accurate when something surprising occurs. Friedrich Hayek once said that “the curious task of economics is to demonstrate to men how little they really know about what they imagine they can design.” He probably didn’t apply that point to economic models, including his own, but it is especially true of their inadequacies.

There are a number of obvious reasons why this is so. One is that economic forecasts tend to be a projection from the past, and so seminal changes tend not to be detected. Second is the illusion that economics can be a science. The method of science is to aggregate data or apply mathematics in order to identify what is unchanging, invariant. That means projecting from the past. It quickly results in statements of the obvious or circular arguments when applied to economics, and they do not lead to good predictions…

Why is this important? Because no-one ever made a buck saying they didn’t know something…The management thinker Peter Drucker, a sharp critic of economic theory, once said, nostalgically, that economics used to be a humble discipline in which practitioners admitted they don’t know much. That is certainly no longer the case and the reason is simple. There is no money in admitting lack of knowledge. Ergo, don’t admit it.

There are nevertheless are things that the experts and the public know well. One is that it is now fashionable for businesses not to value their employees, despite “employees are our most important asset” type PR to the contrary. While many of the successful entrepreneurs I know like building enterprises and are extremely loath to cut staff, Big Corporate America has been shedding jobs even in expansions.

And increasingly, when I see the Wall Street Journal interview the owner/operators of small or medium-sized businesses, a surprising number display contempt towards workers (you’ll see it particularly when they complain that they can’t find enough good workers, which in the overwhelming majority of cases means they aren’t willing to pay up for the sort of people they’d like to hire). There is similarly more than a bit of inside the Beltway detachment from what is happening in the heartlands, in part due to the fact that the DC area is holding up well thanks to the rising tide of lobbyist dollars. For instance, I recall Gene Sperling making the case that the Administration had created a lot of good middle class jobs, and I realized there was something discordant about his remarks. I realized later that Sperling’s “middle class” was an abstraction, people like construction workers, not the sort he really knew personally. And the Administration’s has not only failed to offset the shrinkage of state and local positions, it’s managed to destroy jobs all on its own. This chart is from Warren Mosler (hat tip Cullen Roche): 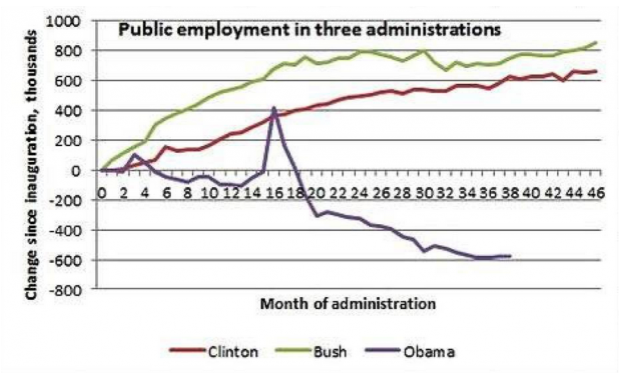 It’s beyond the scope of this post to parse why job generation has eroded as a business and policy priority, but we can single out some culprits, and I’m sure readers can add more. One is the shift from the old economic model of sharing productivity gains between labor and businesses. Stagnant average worker incomes meant that rising, unproductive consumer leverage helped provide for the appearance of rising standards of living. We have reached the limits of that paradigm, with new college graduates often in the position of indentured servants, carrying such heavy debt loads that they are deferring setting up households, a further brake on consumer spending. Older folks who have seen their wealth decimated by falling home prices and poor investment performance are also giving greater priority to saving/paying down debt than spending.

A second cause is the strong shift to an anti-inflationary policy bias. Paul Volcker allegedly monitored construction wages to see if he had succeeded in beating inflation. Having labor slack was one way to reduce labor bargaining power and keep price pressures at bay. So high and moderately high levels of unemployment don’t raise the same degree of alarm that they once did. Reagan was freaked out when unemployment rose over 8% and took much more aggressive measures to combat it than Obama has.

Third is the rise of offshoring and outsourcing. Workers, even in white collar skilled jobs, are increasingly seen as fungible, to be replaced if they become too costly or difficult to manage.

Readers are welcome to disagree, but our high unemployment isn’t just due to the aftermath of a global financial crisis. Japan went for a model of shared sacrifice. Top executives and middle managers, who weren’t all that well paid to begin with, took wage cuts in order to preserve jobs. By contrast, we’d seen CEO (and presumably C level pay with it) rise even as the economy has flagged. If jobs were seen as the glue of society, as they are in Japan, there would be more pressure on executives and government officials to be doing more to provide work for ordinary citizens. The current unemployment rate at least in part reflects a tacit acceptance of a new order, one that is not to our collective advantage, and that deserves to be challenged.