Another blow to what credibility is left in the futures brokerage business in the US may have come in the form of the failure of midsized commodities and foreign exchange broker PFGBest, which claimed to have roughly $400 million in customer assets. Although details are sketchy, the firm was may have been falsifying bank records; the founder of the firm tried but failed to kill himself.

Customer accounts were put on hold today and the firm is being liquidated. Per the Wall Street Journal (hat tip Deontos):

“What this means is no customers are able to trade except to liquidate positions. Until further notice, PFGBest is not authorized to release any funds,” said PFGBest in its statement…

The NFA said it has taken “Member Responsibility Action to protect customers because PFG has failed to demonstrate that it meets capital requirements and segregated funds requirements.” The group also said it “has reason to believe” the firm doesn’t have enough assets to meet obligations to customers.

One commentator tried putting a happy face on this:

Lauren Nelson, director of communications for Attain Capital Management, an introducing broker, drew a contrast with the MF Global situation, saying that if client accounts were at risk at PFGBest, its clearing broker, Jefferies Group Inc., would have issued a “notice that obligations were not being met.” No such notice has been received, according to Ms. Nelson.

I welcome comment from readers who are familiar with commodities regulations, but I’d not be so certain. One of the things that made the MF Global failure so shocking was the freezing of accounts which not only denied customers access to funds, but the inability to trade also meant they had limited ability to mitigate any losses. By contrast, when Refco failed, the businesses were sold to Man Financial, and customers had a smooth transition.

One key difference is MF Global was put into Chapter 11, as opposed to being liquidated under Chapter 7. This move was widely criticized (the CFTC’s Gary Gensler curiously approved this action before recusing himself). Not only did it give considerable advantage to creditors like JP Morgan. From MFGFacts:

In other words, when the SEC threw the liquidation process to SIPC for a Chapter 11 securities liquidation, and with the CFTC’s immediate agreement (under the conflicted Chairman Gensler who had not yet to recuse himself from MF Global issues), a framework of law was chosen where customers were — for the very first time ever — made creditors and their assets thrown into the entire MF Global estate. Many say what! And the industry is now asking how?….

Citing the exemplary record in the futures industry in the event of bankruptcies, former CFTC Director of the CFTC Division of Trading, Andrea Corcoran writes in a January 1993 issue of Futures International Law Letter “As early as 1980, however, concerns were expressed about the ability to retain this record in the event of the bankruptcy of a dually-licensed firm – that is, a firm registered as both a futures commission merchant (FCM) and a securities broker-dealer.”

To rectify this, the CFTC then drafted rules we find under then now famous Part 190 where Corcoran writes, “In the final rules, the Commission noted that Section 7(b) of SIPA (read Securities Investors Protection Act) …proved that a trustee in a SIPA liquidation shall be subject to the same duties as a trustee in a commodity broker bankruptcy under Subchapter IV of Chapter 7 of the Code.”

So in other words, the use of Chapter 11 is much less favorable to commodities brokerage customers than Chapter 7, and the reason for choosing a Chapter 11 seemed to be the result of (at best) shocking ignorance at the CFTC (in that a Chapter 7 would have protected the commodities customers and not put the securities brokerage customers at a disadvantage). By contrast, for a pure futures brokerage, there would be no reason to consider a Chapter 11 (save maybe the intent really was to reorganize the firm, or the liquidity crisis was at the holding company, not in the brokerage unit). The fact that the word “liquidation” is featured so strongly in the Wall Street Journal account is consistent with the expected use of a Chapter 7, which also means that in the end, the PFGBest customers might come out less badly than MF Global customers did.

However, it needs to be stressed that this is not how a regulated broker is supposed to fail. As many seasoned traders stressed at the time of the MF Global collapse, customer accounts are supposed to be sacrosanct. And as a result, it is normally possible to have fairly smooth transfer of customer accounts out of failed firms. If it turns out that twice in a relatively short period that customers had their funds pilfered under regulators’ noses, it means that investors should vote with their feet until they have some assurance that these failings have been rectified.

Update 11:00 PM: Per the statement of the National Futures Association, it looks like half the customers’ money, or roughly $200 million of $400 million, has gone missing: 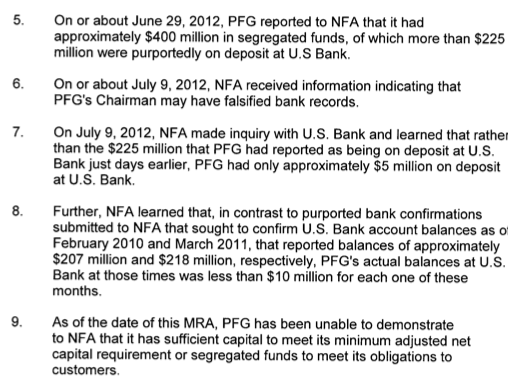