Yesterday, Houses & Holes stated that he was a long-term China bull, largely because of its status as an industrial powerhouse. Today I want to outline the reason why I am a long-term China bear: China’s rapidly ageing population.

As written previously (http://www.macrobusiness.com.au/2012/07/healing-china-means-hurting-australia/”>here, here, and here), China will soon face an ageing problem that threatens to stifle its economy. Essentially, China’s ageing problem stems from its ‘one child policy’, which was brought into effect in 1979 and is credited with preventing around 400 million births from 1979 to 2010. This policy initially produced a population pyramid optimal to economic growth – that is, where the largest segments of the population were neither young nor old, but in the middle (i.e. working age).

However, the demographic blessing provided by the one child policy will soon turn into a curse, with the United Nations forecasting that the number of working aged people to dependents is set to almost halve over the 50 years to 2065, from a peak of 1.9 workers to dependents in 2015 to only 1.0 by 2065 (see charts below).

The stiff headwinds facing the Chinese economy were recently acknowledged at the China Update conference, held at the Australian National University on 10 July, which was described in the Australian Financial Review (AFR) as “the biggest gathering of Chinese economic experts outside China”.

According to conference presenter Cai Fang, who is a demographer and National People’s Congress standing committee member, China’s economy is ageing faster than previously thought, meaning that China is likely to grow old before it gets rich (extracts from here and here):

One of China’s top demographers has warned that a slump in the country’s birth rate to Japanese-style lows or worse threatens to slash the supply of new workers and undercut the nation’s rapid economic growth.

China’s fertility rate (the number of births per woman) is well below the 1.4 level in Japan and closer to 1.2.

“There’s now no doubt China will be old before it is rich,” said Professor Cai, the director of the Institute of Population and Labour Economics and an adviser to the government on population issues. “If our growth rate declines we will not import as much Australian resources but we will need more help with human capital upgrading,” he told The Australian Financial Review…

Professor Cai said it would have taken just nine years for China to shift from the year in which the supply of cheap agricultural labour for city factories started to decline (known as the Lewis point) in 2004 to the equalisation of its dependency ratio next year.

“This is a real challenge because our potential long-term growth rate will decline,” Professor Cai said.

China will hit the point where there are more dependants than workers next year, which is three to four times faster than during the economic development of Japan and South Korea.

“When Japan faced the end of the demographic dividend (when there are a rising number of workers to dependants) it was already rich and had 30 years to adjust,” Cai says.

The comparisons with Japan’s economy are apt. The Japanese economy, which was toast of the world in the mid-to-late 1980s, hit the wall from 1991 when its joint property and stock market bubbles collapsed and its working population began to shrank.

China, which is facing an equally pervasive property bubble, also happens to have very similar demographics to that which existed in Japan two decades prior. To illustrate, consider the following graphics.

First, the population pyramid of Japan in 1990 versus China in 2010. As you can see, they are very similar:

Second, Japan’s dependency ratio in the 1990s – i.e. the ratio of the non-working population, both children (< 20 years old) and the elderly (> 65 years old), to the working age population – is very similar to China’s in 2010 [Note: the UN data from which these charts have been derived has not been updated for the 2010 Chinese Census quoted above, which paints an even more dire picture]: 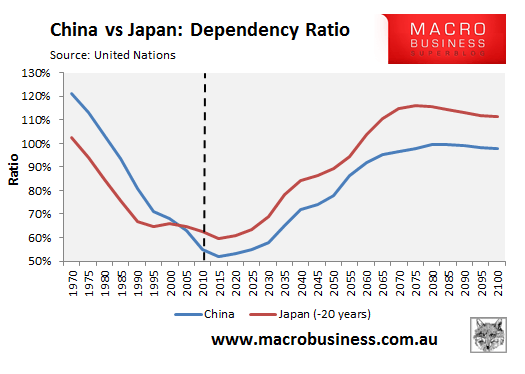 Third, and related to the above, the profiles of the number of working age people per dependent is very similar in the two countries: 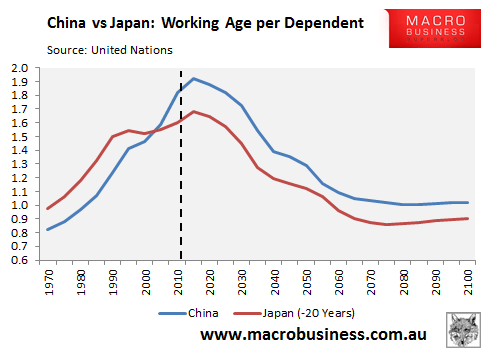 A major difference between the two countries, however, is that Japan was a very wealthy country when its demographic time bomb exploded, with per capita incomes exceeding that of most other Western nations. By contrast, China’s per capita income is currently well below those of the West, which will make the transition to an ageing society all the more harder.

If the saying “demography is destiny” holds true, then China will grow old before it gets rich.