Over the weekend, the newspaper Bild released the results of a new poll on German sentiment on the Euro. It found that 51% thought Germany would do better by leaving the Eurozone with 29% saying Germany would fare worse. In addition, 71% of the respondents said Greece should be expelled from the Eurozone if it could not live up to its austerity commitments.

These results aren’t particularly novel; a large cohort of Germans have been vocally opposed to Eurorescues for some time. What is new about this poll is how low the percentage is that sees being in the Euro as good for Germany. And some respondents don’t seem to understand that expelling Greece is probably fatal to the Euro project. While Greece by itself is almost certainly enough to impair the Eurozone, a Greek exit is likely to escalate the crisis in Spain and Italy. Remember, Spain just quietly asked for €300 billion Euros and was rebuffed. And no wonder. The EFSF has less than €250 billion remaining, and the ESM has yet to be launched.

Reuters reports that a separate Bild-sponsored poll found support for Merkel’s handling of the crisis to be cratering:

Only one third of Germans still believe Angela Merkel is making the right decisions over the euro zone debt crisis, according to a survey published on Sunday, pointing to a steep erosion in domestic support for the chancellor over the last weeks.

The survey by YouGov, due to be printed in Monday’s edition of Bild newspaper, found 33 percent in favor of her stance but 48 percent against, a setback for the chancellor who is to seek a third term in a 2013 federal election, which she has vowed to make a vote on Europe.

Asked in the survey whether they feared for their savings, 44 percent of Germans said that they did.

In mid-July, a poll by ZDF-Politbarometer showed 63 percent of Germans backed Merkel’s handling of the crisis, although a majority thought she should explain her policies better.

Another poll at the start of July by Infratest-ARD put support for Merkel’s crisis policies at 58 percent, although 85 percent of those polled also expected the crisis to get worse.

On the one hand, the usual response to crises is for the populace to turn more conservative and parochial. Grand ideals seem besides the point if you are under financial stress. On the other, the increasing hostility of Germans to the Eurozone is a massive failure of leadership and communication.

As numerous commentators and economists have pointed out, German is the big beneficiary of the Eurozone. Its large, sustained trade surpluses are to its benefit and are also what is breaking the monetary union. But the problem, as Josh Rosner indicated in a recent paper, the “Germany” that is benefiting is not ordinary citizens, but its corporations. And they prospered by squeezing wages, using the fact that Germany entered the EMU at an overvalued exchange rate as the pretext for labor “reforms”: 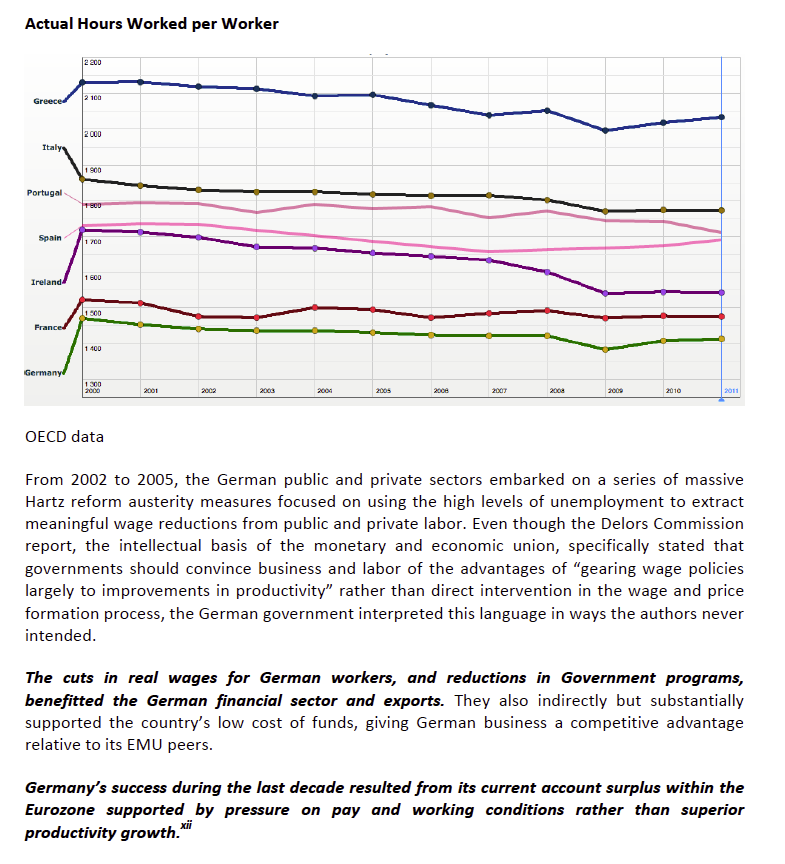 Of course, it’s much easier to play to stereotypes and demonize lazy Southern Europeans, rather than ‘fess up that the rescues have been to save the hides of French and German banks. Yanis Varoufakis reminds us that not a drachma of funding from the next tranche to be released to Greece would actually go to Greece:

On 20th August, the Greek government will have to borrow 3.2 billion from one arm of the Eurozone (from the EFSF) in order to repay another (the ECB). Yet Greece is insolvent. The very idea of an insolvent entity borrowing more from a community, like the Eurozone, in order to repay that same community is obscene. All it does is to shift the burden from the Central Bank to the taxpayers of Germany, Holland, Austria and Finland. This is not an act of solidarity with Greece. It is an act of irresponsible kicking-the-can-up-a-steep-hill.

But it’s much more convenient to have Germans mad at Greece rather than their own leaders for throwing German workers under the bus once, by failing to come up with better ways to share the economic pain of adjustment in the early 2000s, and again, by failing to get tough with banks. And the worse is, as Rosner and others have stressed, that while every way forward will impose costs on the German population, a Eurobreakup or German exit will be far more detrimental to German citizens. ING estimates GDP would fall 9.2% in a full breakup scenario, and unemployment would rise to 9.3%. And if Germany were to leave (as some readers suggest), its currency would skyrocket, leading to an erosion of its trade surplus and rising unemployment, as well as losses to its banks on Euro denominated obligations, necessitating more costly bailouts.

So this situation is ugly indeed. And it appears German leadership is unwilling to try to change the hearts and minds of the public because they are too deeply invested in the story they’ve been telling to change course. The German people are almost certain to wind up poorer as a result.

Update 12:40 AM: The Telegraph reports that the ECB and other central banks may take a haircut on Greek debt as a way to finesse the next round of funding. Notice the continued failure to ‘fess up that this “funding” is merely moving money among parties outside Greece. Reader George P. nevertheless anticipates that the Germans will be apoplectic. From the article:

Intensive discussions now under way among EU policy-makers involve the European Central Bank and a number of central banks taking a significant write-down on their Greek bonds as the price for avoiding a eurozone break-up and losing its weakest link.

France’s central bank, the most heavily exposed, may need to be recapitalised because of the scale of its potential losses. The central banks of Malta and Cyprus are also in the firing line, as well as clearing banks and eurozone governments.

The latest rescue package for the stricken Greek economy is aimed at reducing the country’s debts by another €70bn (£54.6bn) to €100bn, cutting the total to what is regarded as a more manageable level.