Anti-AIDS Pill Out Of Sex-Worker Reach In Push For Cure Bloomberg. The later part of this story is so depressing, the high rate of HIV incidence in low income countries and the lack of cost-effective measures to tackle it (in large measure due to the low average incomes in those countries, which is tantamount to low value being assigned to saving individual lives). Even though I’ve seen these facts before, it’s sad to be reminded of them, particularly since I don’t know of any remedies.

Reports from Health Care Practitioners Health After Oil (martha r). Some early effects of the Affordable Care Act are not looking good at all.

On the Rise of the (Deep) Southern Oligarchy Washington Monthly. We linked to a piece yesterday on Southern oligarchy. Some Southerners, as well as a writer cited by the author of the post, took offense.

The Power of Being Single Salon. Wow, talk about being disconnected from your own culture. I don’t relate at all to the idea of being stigmatized by being single. In fact, I’m uncomfortable being identified with someone else; I have enough trouble managing my own image!

Chart of the Day: Germany in breach of Maastricht Treaty in 8 of 10 years since 2002 Ed Harrison. This is an important piece. The Germans are trying to rewrite history, big time.

Libor Manipulating Banks Used Baltimore’s Tax Dollars To Help Pay Off Your Mortgage, Or Something Dealbreaker

Fed ‘lacked jurisdiction’ on Libor Financial Times. Right. And the general counsel of the Fed didn’t know price fixing is a violation of Article 1 of the Sherman Antitrust Act? Tell me why there was no referral to the DoJ.

How the Republican party can win Financial Times. As much as Romney is acting like a piss poor candidate, Obama’s lead over him isn’t very large, and the economy is unlikely to look peppier come the fall. So this line of thinking isn’t as nutty as it sounds.

It’s True: Corporations Are People Jack Welch, Wall Street Journal. Is an anthropologist or sociologist keep tabs? How many repetitions of this obvious untruth will it take before people are brainwashed?

Goldman Builds Private Bank Wall Street Journal. Confusing nomenclature. Places like Bank Julius Baer, which take funds from the wealthy and provide investments, are “private banks”. Goldman has for quite some time had a large wealth management/private clients group which makes it a reasonably good size private bank. So it is not building a private bank; it has one. What it is doing that is new is making loans to rich people. That’s not a core activity of private banking.

“Great is truth, but still greater, from a practical point of view, is silence about truth. By simply not mentioning certain subjects…totalitarian propagandists have influenced opinion much more effectively than they could have by the most eloquent denunciations.” –Aldous Huxley

CA. Voting: “Perales ‘and other city officials routinely and systematically opened the absentee ballots cast in the 2007 City Council election by mail,’ according to the plea agreement. ‘Ballots cast in favor of the incumbent candidates were resealed and returned to the mail to be counted. Ballots for non-incumbent candidates were discarded.'” Bradblog comments: “[A]s is almost always the case when it comes to fraudulent elections in this country, it was a matter of insider officials gaming the system.”

CO. Fracking: “These [satellite] images appear to support the rumored allegations [that] drillers and frackers may have been driving tanker trucks offroad, opening the valve on the tank while driving, and spraying drilling and fracking fluids and wastes across the landscape.” (MR)

FL. Pass the popcorn: “The bitter feud between Florida Lt. Gov. Jennifer Carroll and a disgruntled aide escalated Monday as the aide’s attorney called for a state arson investigation into a trash can fire in Carroll’s office.” …. Mice roar: “City council members asked for more staff research Monday about Councilman Jonathan Pearce’s proposal to require banks to register foreclosed properties in the city and pay a $200 annual fee.”

IA. Food: “The $500,000 state appropriation to the Iowa Food Bank Association, which Gov Terry Branstad blocked, would have provided more supplies to an organization that is “starving for donations.”

LA. Water: “Low water in the Mississippi River has allowed a ‘wedge’ of saltwater from the Gulf of Mexico to work its way up [the Mississippi but it] is not yet considered a threat to New Orleans, St. Bernard or Jefferson water supplies.”

NY. Corruption: “In the past six months, COR partners Steven Aiello, a D, and Jeffrey Aiello, an R, gave a combined $60,000, according to Cuomo’s latest campaign filing. Earlier this year, the city of Syracuse chose COR to lead a $350 million re-development project at the city’s Inner Harbor. …. Prior to that, the Aiellos had donated only once before to Cuomo, $5,000 in 2010.” (Bob)

OH. Fracking: “One person was confirmed dead from an oil- and natural gas-well explosion Monday morning, but authorities will need additional time to provide positive identification of the victim and an exact cause of the explosion that sent flames and an oil holding tank high into the sky and created a blanket of intense heat that could be felt across the street.”

PA. Fracking, jobs: “Eric Daniels, 43, had counted himself lucky when he got a $17-an-hour job driving a truck that hauls water to natural gas wells. The Riverdale resident’s view shifted after he tore apart his Riverdale home and realized the new pipeline could threaten his job. More than 2,000 water truck trips had been eliminated by the pipeline as of April, the company reported.” (AP) … Gasland vs. (Big Oil-funded) Truthland: neighbor against neighbor. …. Corruption: “Scranton mayor says city council claims of bank ‘collusion’ are untrue.”

VA. Kumbaya: “[O]fficials have announced a new partnership with [Coursera,] a company specializing in offering massive open online courses. The deal, which will offer non-credit classes, was in the works for several months, according to school officials. That means that it was being worked on even as President Teresa A. Sullivan was ousted, then put back into her job as president.”

Outside baseball. Corruption: “Treasury Department officials have been cited for soliciting prostitutes, breaking conflict-of-interest rules and accepting gifts from corporate executives, according to the findings of official government investigations.” Cartagena on the Potomac. Timmy? Anyone we know? … Money: “Only 0.23% of Americans donate over $200 to a political campaign but they constitute 66.3% of the [total dollars] donations.” … Privatization: “Test scores on NAEP, the only no-stakes national test with forty years of data, are at their highest point in history. … Suppose a group of powerful people decided that they wanted to privatize public education. Where would they start?” … Water: “The nation’s widest drought in decades is spreading, with more than half of the continental United States now in some stage of drought and most of the rest enduring abnormally dry conditions.” … Snark watch, London olympics: “I swear, the more I get to know about private industry the more confidence I have in the efficiency of the public sector.”

Green Party. Cheri Honkala: Well, one, I really hope to stay alive in the process and that’s not a joke. Because some of the worst gangsters I’ve met have come from the Democratic Party and of course they aren’t going to be happy.

The trail. Razor thin margin, Paul Begala: “[T]he whole shootin’ match comes down to around 4 percent of the voters in six states. I did the math so you won’t have to. Four percent of the presidential vote in VA, FL, OH, IA, NM, and CO is 916,643 people. That’s it.”

ObamaCare. Rebates: “Something strange is happening all over America: Insurance companies are sending checks to their customers. … It was an actual check for real cash money.” And in an election year. Fancy that!

Romney. David Frum: “Romney’s core problem is this: He heads a party that must win two-thirds of the white working-class vote in presidential elections to compensate for its weakness in almost every demographic category. The white working class is the most pessimistic and alienated group in the electorate, and it especially fears and dislikes the kind of financial methods that gained Romney his fortune.”

Bain flap. Pesky things: “Indeed, no evidence has yet emerged that Mr. Romney exercised his powers at Bain after February 1999 or directed the funds’ investments after he left, although his campaign has declined to say if he attended any meetings or had any other contact with Bain during the period. ” Which is Romney’s claim. … Pesky things: “[Oboma flak] Cutter touched off a frenzy in political circles when she said Mr. Romney either lied to the SEC about the length of his Bain tenure and therefore committed a felony, or is lying to voters now. … Current and former government officials have said it is not unusual for the top shareholder, or the person with the “controlling” interest, to be listed on SEC documents.” Romney’s doing what rich guys do. But Obama can’t say that because he’s got his own rich guys who would take umbrage. So now it’s all about Mitt Romney, Bad Person. And he is, he is! … The meta: Here’s a nice wrap-up (with photo selected to make Romney look slightly crazed, which is the real story: He’s losing the political and media class, if he ever had them. … The meta: “The Bain battle has dominated political talk, obliterating [Romney’s] efforts to talk about his economic remedies. [ha ha ha] And among some Rs, it’s raised questions about the former MA governor’s ability to take a punch and control the campaign narrative against a master campaigner.” Again, losing the political class.

* 53 days ’til the Democratic National Convention ends with buckets of KFC on the floor of the Bank of America Stadium, Charlotte, NC. Barack Obama won the 2008 Presidential election with 53% of the vote. 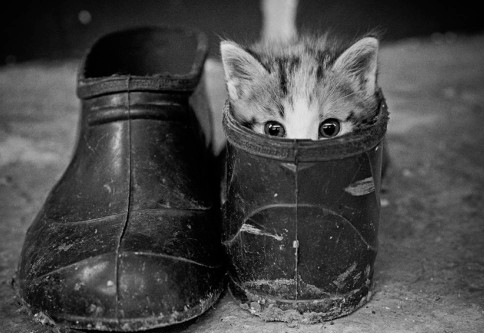