What is wrong with people? Ed Harrison

Congressional insider trading ban might not apply to families CNN

Retirees hit hard by foreclosures MarketWatch (Carol B). The NYT reported on this too, but this sad fact bears repeating, since conventional thinking is retirees are not suffering all that much from housing market tsuris.

JPMorgan Ordered to Identify Witness in Blavatnik Lawsuit Bloomberg (MBS Guy). A reminder as to why only a guy like Blavatnik (80th richest man in the world) can prevail against big banks. Look at the stonewalling by JPM.

Does Money Make Us Write Better? New York Review of Books. Wow, I can’t relate to the way he thinks about this question. But then again, I’ve never aspired to “being a writer,” just to writing well. There is a much simpler answer to his question: 1. Writing more makes you better, provided you can look at what you’ve written at least somewhat clinically. 2. A good editor helps but they are not very common.

Q: Is war inevitable? A: In some form, yes. The state was organized in order to prosecute war; as long as we have states, we will have war. — Phillip Bobbitt

Occupy. Movie review: “[Revolution] is a social healing process and the resolution of violence between opposed social strata if it is successful. The occupation of Zuccotti Park was the beginning of such process rather than a declaration of war against those with privilege. The occupation gave many of us the support and confidence we needed in order to end the isolation we’ve felt obliged to impose upon ourselves in order to avoid the stigma, guilt, and shame that perpetually broke, debt-ridden people tend to experience from living in the most crassly materialistic society ever designed by human beings. The occupation of Zuccotti Park helped many of us feel less angry, less violent, and more like dignified human beings for the first time in our lives.” Well, there’s your problem.

AZ. Privatization: “A year after AZ began a nationally publicized effort to build its own border fence through private contributions, not a single fencepost has gone up.”

CA. San Bernardino bankruptcy: “Bankruptcy law also does not allow for a court to force a city to change any voter-approved law, so a judge cannot impose changes on the City Charter or taxes in light of the provisions of Proposition 218, a 1996 state ballot measure requiring voter approval for local taxes.”

CO. Aurora shooting: Atlantic’s coverage. Detail on the suspect (Denver Post). “After graduation from UCR, Holmes took a part-time job at a nearby McDonald’s. ‘I felt bad for him because he studied so hard. My brother said he looked kind of down; he seemed depressed.'”. Just saying. Twitter timeline (from local teen). Detail on the suspect (AP). Shooting timeline, Aurora. Shooting timeline, US history. “Politicizing a tragedy”. Would “good guy” shooters have helped? No. Yes, answers gun trainer. Campaigns suspended. Candidate quotes.

FL. Public records: “The identity of students who submit complaints about teachers to public schools, including colleges and universities, are public records and must be disclosed to citizens, a FL appellate court ruled Thursday.” … Corruption: “According to the story, former [University of Miami] equipment manager Sean Allen – previously linked to rogue booster and convicted Ponzi schemer Nevin Shapiro – was used as an ‘off-the-books recruiter’ by Miami assistant coaches” with the direct knowledge of coach Al Golden.

ME. D Sen candidate Dill attempts to get the DSCC’s attention.

OH. Privatization: “Of the 77 people in attendance Tuesday, 75 raised their hands to say they are against the governor’s idea of privatizing the 241-mile [Ohio Turnpike].” … Fracking: “When I found that essentially no government agency had the jurisdiction to protect public health and safety due to exemptions granted to the oil and gas industry, I figured it was my civic duty to advise the community. I wrote a letter to the editor for the first time in my life.”

PA. Abortion: “The [Abington Health and Holy Redeemer merger] plan is dead. Cause of death: the spiral of opposition to the elimination of abortion services at Abington. The demise of the merger is clearly a tribute to the tireless and impressive community opposition effort. The defeat of the merger was the fastest in their history of work on such issues.”

TN. Overton Window: “The center of gravity in TN politics has shifted so hard to the right that two dozen conservative R incumbents are under attack as moderate squishes and cowardly sell-outs in their own party’s primary elections for the state legislature.”

TX. Market state: “[Medicaid practitioners say that] an anonymous call to a fraud hotline or a computer-generated analysis of a handful of billing codes is enough to halt their financing… The majority of [payment holds] were ‘Credible Allegation of Fraud,’ or CAF, holds — a provision in the new federal health reform law that authorizes states to suspend Medicaid payments if allegations of fraud have an ‘indicia of reliability.'” Signature strikes. … Aurora shooting: “[Rep. Louie Gohmert R: W]th all those people in the theater, was there nobody that was carrying a gun that could have stopped this guy more quickly?” Sigh. … Corruption: “Instructors and trainees [Lackland AFB] at the center of an Air Force sex scandal are under constant surveillance, a witness testified Thursday in the trial of an instructor facing rape and sexual assault charges.”

VT. Solid waste: “Last week the Chittenden Solid Waste District recalled all of its Green Mountain Compost products sold on the retail market. … Laboratory tests showed trace amounts of the herbicides Clopyralid and Picloram in the products. Some garden plants were damaged by the chemicals. The district is conducting tests to determine the original source of the contamination.” Openly, I hope.

WI. Revealing metaphors: “[Gov] Walker saw fields would normally be bright green this time of year instead dotted with splotches of tan, yellow and brown. He said the ground looked like a big golf course with massive sand traps. He later commented that it looked like the green, tan and brown camouflage uniform.” Just saying. … Corruption: “The head of Milwaukee County’s office for disadvantaged business development was jailed Thursday, suspended from her county job and locked out of her county office.” … Privatized voting: “[L]ike so many other rural counties that voted strongly D in recent elections, Crawford County went for Walker by +100 votes. This was a curiosity that sent me to the County Clerk’s office in Prairie Du Chein, and I learned the election materials had already been send back to the machine vendor, Command Central, before the time prescribed by state statutes.” Not sure on the statistical analysis.

ObamaCare. OH pundit Suddes: “[Y]ou can forget R campaign vows to repeal [ObamaCare]. You may think Obamacare is about “health.” It’s really about who picks up the check. It’s likely that more Rs than Ds are OH hospital trustees. But either way, hospital trustees tend to have money. And political connections. And pride in “their” hospital. Hospitals and allied health businesses are huge Ohio employers.”

Jobs. Qu’ils mangent de la brioche: “Near-suicidal despair. That is what many Americans have earned from this recession.” That’s not a bug. It’s a feature. (GW is quite right.) … Razor thin margin: “The jobless rate climbed a 10th of a percentage point last month in MI, PA, CO, IA, NH and VA, the Labor Department said in a report released Friday.” … Leading the witness: “Representative John Carney, D [!!] of DE, asked [Bernanke], ‘The Fed is doing everything it can to address the unemployment part of your mandate, is that correct?'” One big happy! … Payroll tax: “The emerging consensus in the Senate Democratic Conference is that the payroll tax holiday should not be extended for another year, even though the economy is slowing. Ds are worried about the impact on Social Security.” Taxes do not fund spending!

Outside baseball. Post-constitututional government: “‘On at least one occasion,’ the intelligence shop has approved [!!] Sen. Ron Wyden (D-Ore.) to say, the Foreign Intelligence Surveillance Court found that ‘minimization procedures’ used by the government while it was collecting intelligence were ‘unreasonable under the Fourth Amendment.’ Minimization refers to how long the government may retain the surveillance data it collects.” “Approved?” “Approved”?! How come Issa can use the Speech and Debate clause, and Wyden wusses out? … Hmmm: “Sen. Jim DeMint (R-S.C.) is delaying Senate consideration of the United Nations treaty on people with disabilities amid growing opposition from home-schooling advocates.”

The trail. Aurora shooting: “Be a little careful with polls you see over the next few days. Tragic events can sometimes bolster support for the incumbent president because of a rally-around-the-flag effect, but the impact is usually short-lasting.” … Winning the political class, or not: “Romney’s campaign isn’t winning many plaudits from the country’s political class, according to the latest National Journal Political Insiders Poll. [Then again, said] another Republican, ‘You don’t get to be president by winning July.’” … Money: Handy interactive on ad spending in presidential battleground states. … Money: “The biggest spending is yet to come in a presidential race that could hit an eye-popping $3 billion.” … Oppo: “It strains credulity that the firestorm of recent anti-Bain articles was entirely sparked by the journalistic equivalent of spontaneous combustion.” … Campaign ads, good read: “Political ads are too multifaceted to be labeled simply as negative or positive — and to conclude that one type is superior to the other.” … Not rehabiliated. Via Bush spokeshole: “[Bush is] still enjoying his time off the political stage and respectfully declined the invitation to go to Tampa.” Also too, Jebbie.

Romney. Dog not barking: “Despite outraising the president for the past two months, Mr. Romney cannot spend much of that money until he officially becomes the GOP nominee at the party’s national convention in late August.” The dead woman or live boy needs to come from Rove, then. Why hasn’t it? … Tax returns: “Tax experts have devised a different theory of how Mr Romney’s IRA grew exponentially [wish mine had!], and it involves a complex valuation of the securities that it held.” It would be irreponsible not to speculate! … Tax returns: “Obama has turned debate on taxes into a personal responsibility issue for Romney.” … Bain flap: “[Romney] drove the complex negotiations over his own large severance package. Indeed, by remaining CEO and sole shareholder, Romney held on to his leverage.” Quelle horreure! So, that big executive decision Lord Richistan has been holding out on us is his own severage package? That is the “elephant in the room”? … Snark watch: “The president campaigned in FL in 2008 and said he would help to make things better. And they’re not better. And you can only run on ‘hope and change’ once.” Ouch!

Obama. Hopey Change 2.0: “Obama for America,” a voice-over rumbles. “This year, we don’t have the budget for nuance.” … Hopey change 2.0: “[OBAMA:] If you still believe in me, and you stand up with me, and make phone calls and knock on doors and get out there and organize with me, we’re going to finish what we started in 2008.” I don’t know about you, but “finish what we started” doesn’t make it for me.

* 49 days until the Democratic National Convention ends with a swell feed of bushels of dried corn husks and dead locusts on the floor of the Panther Stadium, Charlotte, NC. The ’49ers gold rush. How appropriate.

Antidote du jour. Did someone give that raccoon a mullet? 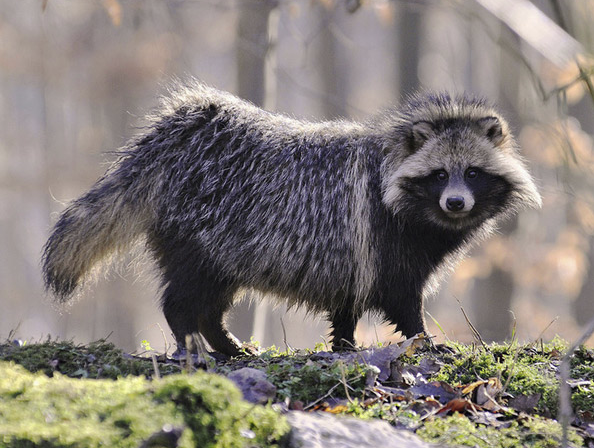