One Act of Remembering Can Influence Future Acts Science Daily

My thwarted attempt to tell of Libor shenanigans FT. “My naivety seemed to be humorous to my colleagues.”

Internal auditor at a major bank: ‘In the US they can be very uncooperative’ Guardian

Maria Bartiromo And Barney Frank Were Just At Each Other’s Throats For A Solid Ten Minutes Business Insider. Transcript.

The Big Banker’s Change of Heart (if any) Times editorial.

A Letter from Mark Zuckerberg The New Yorker

Economy in U.S. Probably Expanded at Slowest Pace in a Year Bloomberg

In the Dumps Financial Armageddon. The garbage indicator.

Paycheck-to-paycheck: US households barely getting by RT.

Hedemonics or Humanomics?: A Response to McCloskey’s Critique of Happiness Economics Brookings

‘Something Wonderful Out of Almost Nothing’ New York Review of Books. Maurice Sendak.

The Upside of Default The Archdruid Report

Lambert here: I apologize for these links being thin; I have to visit a friend in the hospital.

“They have learned nothing and forgotten nothing.” –Talleyand, of the Bourbon dynasty

FL. Legacy parties: “In a wide-ranging deposition that spanned two days in late May, former FL R Party Chairman Jim Greer denounced some party officials as liars and ‘whack-a-do, right-wing crazies’ as he described turmoil in the months before his resignation.” Pass the popcorn. …. Voting: “[A]lmost half of FL’s voters will have their ballots counted this November by machines that can malfunction in as little as two hours and start adding votes. Although not used in Palm Beach County, the machines will count votes in some of the most populous counties in FL, including Miami-Dade. [R]ecounts are sharply restricted by state law: County elections supervisors can examine only a tiny slice of ballots after an election — typically no more than 2 percent of precincts. Worse, audits are allowed only after the winners are declared. ‘It closes the door after the horses have left the barn,” said Dan McCrae, president of the nonprofit Florida Voters Foundation and an analyst for Verified Voting.'”

LA. Public goods: “It’s hard to produce a hurricane to wipe away public education, as happened in New Orleans. Next best to accomplish that goal is a national strategy of closing schools and opening new schools, especially charters, supported by many foundations and the U.S. Department of Education.”

NM. Corruption, mass incarceration: “A FL for-profit prison company [GEO Group] who gave tens-of-thousands of dollars to Governor Susana Martinez has been outed as the secret company whose sudden tax appeal threatens to bankrupt at least one NM city.’

OR. Voting: “Americans Elect, a ballot-qualified Party in OR, has three [count ’em, three] registered members.”

PA. Unions: “I’m disappointed that the vice president didn’t say: Yo, Mr. Mayor, honor the agreement,’ [Bill Gault, president of Local 22 of the International Association of Fire Fighters] said as Biden was shaking hands with some of the 3,200 firefighters at the Pennsylvania Convention Center.” … Unemployment: “One local resident said she tried at least 50 times over the past two weeks to phone in her updated information [to PA’s unemployment call center] but couldn’t because the line was constantly busy. Exasperated, she contacted a regional office for the state Department of Labor & Industry and was given two different phone numbers to try. Both numbers had been disconnected. Filing updated information online was fruitless, too; she never got a confirmation her e-mails had been received and needed to talk to a human being.” Coincidence, I’m sure. … Voting: “‘We walk them through the steps, motivate them, come up with the carfare … travel down to PennDOT to get ID.’ But when they get there, [outreach specialist Benjamin Mitchell] says, they’re still being told they need to pay $13.50 for an ID card—money that many people he works with, especially the homeless population, don’t have.” That’s not a bug. It’s a feature. … Voting: “Applewhite is a spry but motorized-wheelchair-bound 93-year-old Philadelphian who marched one time with Dr. Martin Luther King Jr. in the 1960s, was a first-class welder after World War II, and cast her first presidential vote for Franklin Delano Roosevelt in 1936. The lawsuit to stop the new voter identification law from being enacted carries her name. Applewhite told Judge Robert Simpson she thinks the statute, which was signed by Gov. Tom Corbett in March, is ‘crap’ and she said she is worried it will prevent her from voting this November.” Dittoez. … Voting: “Although a majority of Pennsylvanians still support the law (58 percent to 37) that is down 8 points from a 66 percent to 32 approval rating in a Quinnipiac poll six weeks ago.”

TX. Epidemic: “[P]ublic health officials have declared a West Nile epidemic after 124 reported human cases of the virus have cropped up in North TX alone.”

VA. Universities: “Virginia Union University (VUU), a historically black university tracing its founding to the end of the Civil War, has been publicly sanctioned by its accrediting agency for non-compliance with financial and financial-aid standards. The [Historically black colleges and universities] they have less pricing power — ability to raise tuition and fees — than other institutions at at time that students and their families are rebelling against the unaffordable cost of a college degree.”

Outside baseball. Hagiography: “Continuing to repair his personal brand, Rove signed on with Rupert Murdoch’s News Corp.” Alrighty then. … Tax cuts: “[U]nder the D proposal, all Americans would still pay lower rates on their first $200,000 (or $250,000) in taxable income. And up to that level, individuals who earn more would actually see a greater financial benefit. As analysts from the Center for Budget and Policy Priorities noted when reviewing a similar proposal back in 2010, ‘high-income people actually receive much larger benefits in dollar terms from the so-called middle-class tax cuts than middle-class people do.'” Film at 11. … Corruption: ‘The [Inspector General’s] report is the third investigation in less than a decade that has found numerous examples of illegal hiring practices, amounting to nepotism, within the DOJ.” … Privatizing education: “This sums it up: We really are living a dystopian novel.”

The trail. Razor-thin margin: “‘And given how close this race is, I wouldn’t be surprised if the whole thing comes down to undecided executives at Dow Chemical or Disney,’ [Nate] Silver [of the New York Times] continued. ‘Let’s not forget 2000, when Philip Morris International single-handedly put George W. Bush into office.'” … Enthusiasm: “I have in my gut a belief that the polls [of likely voters] we are seeing now underrate Romney’s strength. For example, we saw a hugely enthusiastic young voter turnout for Obama in 2008. As a result, polls were weighted to give more voter strength to the category of 18- to 29-year-olds than in past years. In general, younger voters just do not turn out to vote. This year, I am seeing evidence that the enthusiastic and energetic vote of young Americans for Barack Obama has at the very least lost some of its mojo.” … Enthusiasm: “In 2010 Democratic voters and left-leaning independents sent the D Party a clear message at the polls. By staying away in unprecedented numbers — and allowing the worst Tea Party monstrosities to win seats, take over states and take over Congress, even to the point of crippling the country– grassroots Ds made it clear they would NOT vote for Blue Dogs, New Dems and conservative disguised as Ds. 63 seats changed hands, all but two from Democratic to Republican. So what did the Democratic Party learn from this disaster? [The leadership] immediately– and predictably– went out and started recruiting conservatives, in many cases the exact same conservatives who were just defeated.” … Swing states: “Refinancing applications in NV jumped 368.8 per cent in the year to June, and 247 per cent in FL. Both of these “sunbelt” states are expected to be big political prizes in November. OH refinancing applications rose 193 per cent – well above the national average – while in MI they increased 294 per cent over the past year.” … Media critique: “Another day, another Romney ad that takes a perfectly routine quote widely believed by Dems and turns it into proof that Obama is completely indifferent to your economic suffering.” They all are; austerity is a completely bipartisan project, and the only conventional wisdom in town.

Robama vs. Obomney watch. Climate: “[B]oth political parties and their presidential candidates are playing down the climate issue. Instead, what passes for an energy debate in the United States is rivalry over which party is more devoted to extracting oil and gas from the ground and the seabed.”

Romney. Olympic gaffes flap: Compilation from the Guardian; timeline from the WSJ. Of course, the “worst” of them — “[ROMNEY:] The stories about the private security firm not having enough people, the supposed strike of the immigration and customs officials – that obviously is not something which is encouraging” is a classic “Kinsley gaffe”: “When a politician tells the truth – some obvious truth he isn’t supposed to say.” It’s worth noting that the very same scorps going nuts about all this would have covered the same statements from Bush as lovable eccentricities. Which is the real story.

Obama. Gun nuts: “[Spokeshole Carney: “[W]e do need to take a broader look at what we can do to reduce violence in America. And it requires a multi-faceted approach that looks at this problem from a variety of angles, and that’s not just legislative and it’s not just about gun laws.” Mush. … Straight to video: “The D said that presenting Obama as ‘a favorable and credible messenger’ speaking directly to the people in ads is a tactical move by the campaign to drive home its message. ‘I’m Barack Obama and I approved this message because I believe we’re all in this together,’ he says.” That’s from the “Always” spot, which also sounded robotic to me. Obama’s heart, if any, clearly wasn’t in it.

* 44 days until the Democratic National Convention ends with a tuna casseroles on the floor of the Bank of America Panther Stadium, Charlotte, NC. 44 is the UK’s area code. Mitt. 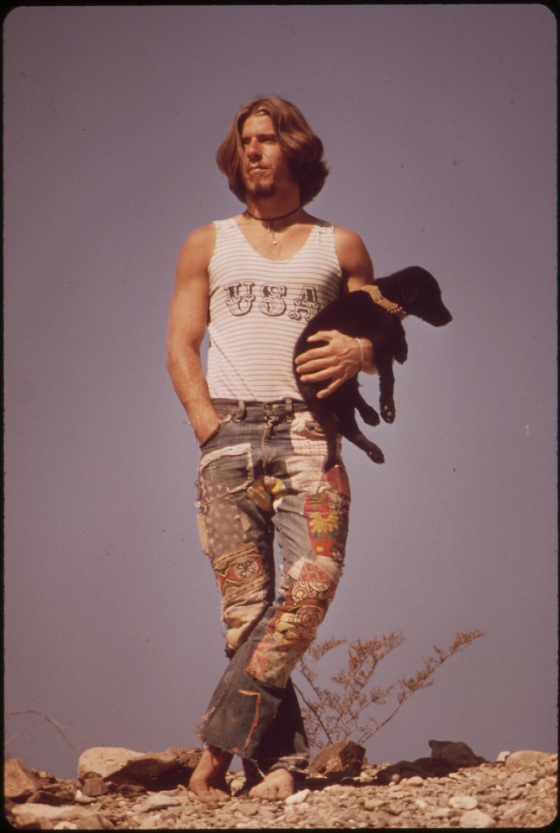